Warning: mysqli_free_result() expects parameter 1 to be mysqli_result, bool given in /var/www/html/americanthinker/admin/common/functions/func.general.php on line 126
 Culture and the Barbarians at the Gate - American Thinker
|

Culture and the Barbarians at the Gate

A lot of attention is being paid to culture. We read about clashes of culture and culture wars. Concerning the Atlanta scandal of 35 educators indicted for inflating the test scores of their students, former Reagan budget director David Stockman on ABC's This Week said: "Cheating is symptomatic of a huge cultural problem we have. "Upon the death of Margaret Thatcher, Times columnist David Brooks wrote that she "was formed by her disgust with 1970s Britain," which she saw as a "moral shift... away from the culture of rectitude and toward the culture of narcissism."Something is wrong with the culture. But what exactly is culture?

The subtitle of David Mamet's The Secret Knowledge (2011) is: "On the Dismantling of American Culture." (Go to his website to read the first chapter or to order.) Mr. Mamet contends that "culture predates society." In Chapter 3 he writes:

The Culture, of a country, a family, a religion, a region, is a compendium of these unwritten laws worked out over time through the preconscious adaptations of its members --- through trial and error. It is, in its totality, "the way we do things here." It is born of the necessity of humans getting along. It does not come into being because of the inspiration, nor because of the guidance, of any individual or group, but it evolves naturally: those things which work are adopted, those which do not, discarded.

Mr. Mamet is writing about something deeper and more basic than what many think of as culture. In "Is the Nation-State Leaking Culture?" at Cato's Domain, Michael Booth writes:

Yet I contend the most fundamental of all the elements combining to create and sustain the nation-state is culture. It's culture that holds and focuses all of the others. [...] Culture is explosive. It's divisive. It's not contained by the nation-state but is a crucial glue binding the nation-state. When infused with historical grudges or religious "jihad" ... or even just a peaceful awakening sense of individualism and a desire for local control ... culture becomes a weapon with the power to shatter both the nation-state and the welfare state governments that ride along upon it.

Some nations are rather proprietary about their culture. France, for instance, has bemoaned the Americanization of its culture, (even while French suburbs fill up with Muslim émigrés who hate France and have no intention of being assimilated). American minorities speak of their own culture, as do American youth. (When young American barbarians are told they have their own culture, they're apt to express themselves with tattoos and nose rings.)

When some think of culture, they may well think of something along the lines of Matthew Arnold's Culture and Anarchy: "the best which has been thought and said." That is, literature, art, architecture; i.e., high culture. While high culture may be what pops to mind when we consider other nations, low culture and pop culture are what a nation is steeped in. Rock & roll and rap play a bigger role in our culture than do the symphonies of Leonard Bernstein; we care more about sports than what's showing at art galleries. Mamet and Booth are closer to what the culture is than is Arnold.

Culture is all about standards. But wherever we look we see the erosion of standards. It is no wonder that an America that tolerates the intolerable would see the rise of a culture of corruption. Bad public policy has contributed to America's breakdown in standards. Government has cultivated a culture of dependency. We see an ever-growing coarseness and crassness in our culture. Much of what divides America may simply be attributable to a loss of manners. As Sheriff Bell remarks in No Country for Old Men, "once you quit hearing 'sir' and 'ma'am,' the rest is soon to foller."

Progressives have never understood culture. Progressives think culture can be dictated from on high. They think people from radically different cultures can be thrown together and all will be sweetness and light. They cleave to the bankrupt ideologies of cultural relativism and multiculturalism. These ideologies have fostered doubt in our own culture, but we are not to judge other cultures and peoples, however barbaric.

Culture is the dominant practices and values of a people. Culture defines a people. Palestinians strap bombs onto their women and children and direct them to detonate in crowds of people they hate. The world is supposed to "understand" this and to respect their "culture." After all, aren't all cultures equal? At least, that's what progressives would have us believe.

A civilization can consist of several cultures, and those cultures can differ. In the 1940s the cultures of England and Germany were quite different. But both nations were part of Western Civilization. Even a nation with a culture as sophisticated as Germany's can fall into barbarism when it's been beaten down and a charismatic leader comes along.

John Frankenheimer's excellent The Train (1964) concerns an obsessed Nazi colonel who attempts to take a treasure trove of French paintings back to Germany by rail. It is the final days of the German occupation of Paris during World War II. A group of French railway men try to thwart the colonel's theft through sabotage. But when it looks like the colonel will succeed in his theft, a railway inspector, Labiche, singlehandedly derails the train before it leaves French territory. The colonel is furious; he tries to commandeer the trucks of a passing German convoy. He orders the paintings to be transferred from the train to the trucks, but is met with resistance. The officer in command of the convoy informs the colonel that a French armored division is just over the hill; "in this sector the war is over." The colonel tells his soldiers to go on without him. As they are leaving, French hostages are mowed down by machine gun. After the retreating Wehrmacht has moved out, amid the massacred Frenchmen and crates of priceless art, the colonel comes face to face with his nemesis:

Labiche! Here's your prize, Labiche. Some of the greatest paintings in the world. Does it please you, Labiche? Give you a sense of excitement in just being near them? A painting means as much to you as a string of pearls to an ape. You won by sheer luck: you stopped me without knowing what you were doing, or why. You are nothing, Labiche -- a lump of flesh. The paintings are mine; they always will be; beauty belongs to the man who can appreciate it! They will always belong to me or to a man like me. Now, this minute, you couldn't tell me why you did what you did. 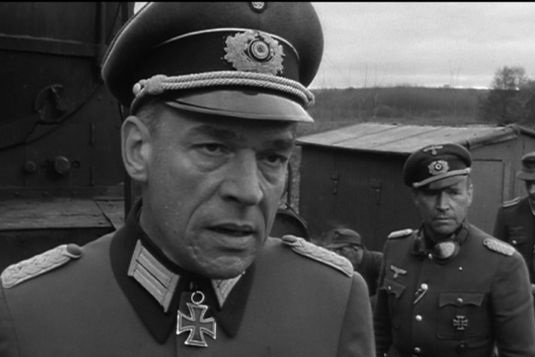 Labiche looks back for a moment at his slain countrymen and then eloquently answers the colonel's accusations. We then see the crates of French masterworks upon which are stenciled the names of Braque, Renoir, Degas, Cezanne, Dufy, and Lautrec. Interspersed between the shots of the crates, we see the faces of the slain Frenchmen. And then we see Labiche limping back to town, and the movie ends.

Labiche and his fellow saboteurs seemed to be ordinary Frenchmen and probably not connoisseurs of high art. Perhaps the reason they did what they did is because they dimly sensed that they must do something to save their heritage, their...culture.

The barbarians at the gate are us. We're vandalizing our children's future and robbing them of their birthright. We are the barbarians we've been waiting for.

NOTE: I found this YouTube clip of the final scene from The Train for you cineastes. But, if you haven't seen the entire flick and screening just the final scene seems, oh, rather barbaric to you, then watch the whole thing for free. You will of course recognize Burt Lancaster as Labiche. Burt was a natural athlete, and his role here is rather physical. He got injured, he soldiered on. Paul Scofield superbly plays Colonel von Waldheim. Not in the clip is Wolfgang Preiss, the colonel's number two, Major Herren. Preiss was a terrific actor; the Teutonic equivalent of James Mason.