Warning: mysqli_free_result() expects parameter 1 to be mysqli_result, bool given in /var/www/html/americanthinker/admin/common/functions/func.general.php on line 126
 Before the Gosnell Blackout, There Was Tiller's - American Thinker
|

Before the Gosnell Blackout, There Was Tiller's

If there was any real difference between what the late abortionist George Tiller did in Wichita over the course of his long career and what Kermit Gosnell did in Philadelphia, it was hygiene.

Tiller had a largely white, middle-class clientele.  They came to him from all over the world.  Before his murder in 2009, he had boasted on his website of having "more experience in late abortion services with fetuses over 24 weeks than anywhere else in the Western Hemisphere, more than 60,000 since 1973."

Like Gosnell, Tiller routinely took the lives of healthy, viable babies eager to be born, in flagrant violation of state law.  But given the expectations of his clients, Tiller kept a neater shop and, to ease the conscience of his supporters, almost always performed his mayhem out of sight, within the womb.

Had Gosnell been in Wichita, he likely would have done the same.  As clinic worker Tina Baldwin testified to the grand jury, Gosnell kept one room in the facility clean for the odd "white girl from the suburbs."  He would personally escort those patients to that room and even turn the TV on for them. More importantly, he, not his uncredentialed assistants, would administer the anesthesia.  "That's the way of the world," he told Baldwin.

I cannot add much to the discussion as to how or why the media have chosen to ignore Gosnell's macabre practice, but I can speak with some authority on the Tiller case.  Working out of Kansas City, I tried repeatedly to break the story out into the mainstream media, local and national, and never quite succeeded.

Those who argue that the media turned their back on Gosnell's patients because of their color miss the larger point.  The media turn their back on these cases because of their nearly monolithic support of the abortion industry.  In a red state like Kansas, with patients like Tiller's, the media had to work much harder to suppress the truth.  That they did, and that they continue to do.

I started tracking the Tiller story in earnest with the election in 2002 of Republican Phill Kline as Kansas attorney general.  Kline was a friend.  I knew him well.  I knew he meant business when he set out to make Tiller honor the law.

As a state representative, Kline had helped write that law.  The law allowed for a late-term abortion on a viable baby only "to preserve the life of the pregnant women" or to prevent her from suffering "substantial and irreversible impairment of a major bodily function."

What Kline knew -- what anyone paying attention knew -- was that Tiller was making a mockery of the law.  It has since come out that Tiller routinely translated an adolescent's unease about missing a prom, a rock concert, or a chance to participate in a rodeo as "substantial and irreversible impairment of a major bodily function."

Basically, Tiller would abort a healthy late-term baby for just about anyone who wanted an abortion.  He was also refusing to report to state authorities, as required by law, the many young girls who had come his way as a result of a rape, statutory or otherwise.  Kline suspected this as well and later proved it.

That same year that Kansans elected Kline, they also elected Democrat Kathleen Sebelius, now head of the Department Health and Human Services, as governor.  For the next six years, she did everything in her power to bedevil Kline and protect Tiller.  What made her task easy was that she had the media in her pocket.

When Kline attempted to secure the records that would prove the obvious, Sebelius's bureaucrats and her pals in the media turned on him viciously.  They labeled him "Snoop Dog Kline."  They called him a "panty sniffer," a "zealot," a "theocrat."

In 2006, Sebelius persuaded Paul Morrison, the popular Republican district attorney of the state's most affluent county, to switch parties and run against Kline.  The Kansas City Star's support for "reproductive justice" in the battle against the "anti-choice extremist" Kline was so passionate, in fact, that Planned Parenthood honored the Star with the "Maggie," its top national prize for editorial writing.

With the full-throated backing of the media and Tiller's massive financial support behind him, Morrison ousted Kline.  Before leaving office, however, Kline had filed 30 counts against Tiller for performing illegal late-term abortions.

In other words, Tiller stood accused of taking the lives of 15 fully viable unborn babies whose mothers were equally healthy, in utter disregard of Kansas law.  While Morrison was reviewing these charges, Sebelius honored Tiller and his staff at an elegant but extremely discreet soiree at Cedar Crest, the governor's mansion. 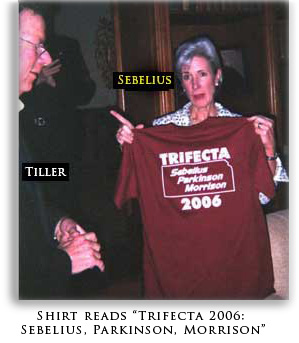 Tiller, which reads, "Trifecta 2006: Sebelius, Parkinson, Morrison."  In the photo, Sebelius points at Tiller as if to acknowledge his contribution to that victory.  Not surprisingly, Sebelius and her minions would see to it that the prosecution of Tiller went nowhere.

During this period, I served as executive editor of the region's business magazine and appeared frequently on a local PBS panel show called "Kansas City Week in Review."  My publisher at the magazine was sympathetic but understandably squeamish.  The Star had so poisoned the atmosphere against Kline that to run a piece in support of him risked losing the magazine's advertising base.

The Star reporters with whom I appeared on the panel show were wary.  They knew I had the inside track on the Tiller story, but they would all but hold their hands over their ears when I raised the issue.  They did not want to know any more than they knew and would find excuses to justify their incuriosity.  The show's host was a good guy, but the brass upstairs discouraged him from giving the issue air.  In time, they simply stopped inviting me on the show.

Fortunately for Sebelius and the media, Tiller was gunned down at his Lutheran church in Wichita on May 31, 2009.  Now, finally, the media could address Tiller's life and work.

NBC's Nightly News showed a clip of Tiller stating, "You simply cannot retreat when you're committed."  Feminist honcho Eleanor Smeal told an NBC reporter, "People don't understand the need for this service, that women's lives are saved, but he did. And he was brave enough to keep going."

The rest of the networks were just as effusive, if not worse.

If someone had interviewed me, I would have said, "You want to blame someone? Blame Sebelius. Blame yourself. By protecting Tiller from the judicial system, you exposed him to the extra-judicial."  Needless to say, no one asked.  They are still not asking.