Warning: mysqli_free_result() expects parameter 1 to be mysqli_result, bool given in /var/www/html/americanthinker/admin/common/functions/func.general.php on line 126
 Why does anyone need a high-capacity magazine? - American Thinker
|

Why does anyone need a high-capacity magazine?

There are several reasons for civilians to own high-capacity magazines: the right to possess the necessary means to effectively defend themselves, misconception of bullet stopping power and shooting accuracy, and the issue of multiple attackers.  Additionally, on a net balance, there are benefits to the community when law-abiding citizens own guns with high-capacity magazines. 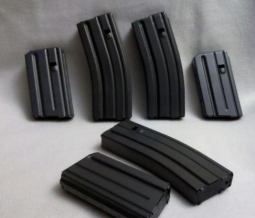 William Levinson at American Thinker smartly posed the question, "Do you believe that all human beings have a natural and inherent right to defend themselves from violent attack?"

Jeffrey Snyder at the Cato Institute points out that victims don't choose where and when they will be attacked.  It is the criminal who decides.  The criminal will wait until the victim is most vunerable, until he is alone, or when the police are gone.  He will try to have every advantage over the victim, whether it be an armed advantage, strength, or outnumbering his prey.  Mr. Snyder states, "The encounter will not be on equal terms; the fight will not be 'fair.'"

In order for a victim to stop a violent attack, he or she will need to successfully balance the playing field.  The victim must have the means necessary to effectively save his or her life; otherwise the right to self-defense is worthless.

Currently, national politicians have determined that a ten-round (bullet) limit per magazine is sufficient for civilian self-defense.  The politicians have come to this conclusion without any evidence or research to substantiate their claim.  Shouldn't we be concerned with how many rounds it takes to stop an attacker?  And why?

First we should address some common fallacies about bullet stopping power.  The only gunshot wound that can reliably cause immediate incapacitation is a hit to the brain or upper spinal cord.  Even after being shot through the heart, a suspect still has enough oxygen in his blood to shoot back for 15 seconds.  Additionally, bullets do not have the energy to knock down humans.  If that were the case, then the energy traveling in the opposite direction (the recoil) would knock down the shooter as well.  An FBI report on handgun wounds provides an interesting example:

The FBI report mentions a number of reasons why suspects are able to take multiple bullet hits and fight on.  Some examples include adrenalin, extreme anger, painkillers, and stimulants (cocaine, crack, meth, etc.).  All of these examples can keep a suspect from feeling pain or even realizing he's been shot.  The following is a real-life example of the realities of a gunfight:

In 1986, in Miami, FBI agents were involved in a shootout.  Despite being shot six times, Suspect Michael Platt was still able to gun down two FBI agents and injure three others.  Platt was hit by four more gunshots, but he continued to be a threat by pointing a gun at responding officers.  It wasn't until bullet number twelve struck Platt in the chest that he was incapacitated.  Similar examples of suspects being shot five to six times without being incapacitated occurred in Philadelphia and Georgia.  In a self-defense situation, you may have to inflict half a dozen or more gunshot wounds on your attacker in order to neutralize the threat.  That's assuming that you are able to land half-a-dozen hits on your target.

Most states already allow citizens to own high-capacity magazines.  Economist John Lott found in an eighteen-year period that only 23 handgun murders in the U.S. were committed by citizens who had a permit to carry a concealed firearm (conceal carry permit holders).  That's a little over one per year.  He also found that in one month from December 14, 2008 to January 11, 2009, ten conceal carry permit holders stopped violent crimes.  Gary Kleck's survey (which encompasses all defensive gun uses -- not just those with conceal carry permits) produced a national estimate close to 400,000 lives saved by defensive gun use per year.  Kleck notes:

As a point of comparison, the largest number of deaths involving guns, including homicides, suicides, and accidental deaths in any one year in U.S. history was 38,323 in 1991.

Not only are there benefits to the community in lives saved, but Kleck's survey showed that women accounted for 46% of all defensive gun uses.  High-capacity magazines are a benefit to women because they help equalize self-defense situations for women.  Females already face physical limitations against male attackers.  Limiting their magazine capacity only helps the criminal.

We've seen that it's not uncommon for suspects to still be a threat after being shot half a dozen times.  Factor in that trained police officers operating under the stress of gunfire are landing roughly only one in ten shots.  Statistically, low-light shootings at night or indoors with poor lighting bring down the hit percentages.  Compound that with the possibility of multiple attackers and any reasonable person would conclude that limiting a civilian to ten rounds is not nearly enough for self-protection.  The NYPD, LAPD, and the LASD don't limit their officers to ten-round magazines.  They all issue 15-round magazines, except for the LASD, which now issues 17-round magazines.

If a law-abiding citizen, who's cleared a background check and received firearms training, can be trusted with one bullet, why can't he or she be trusted with a hundred bullets?  Is the first bullet any less deadly then the 99th?