The political world changed its orbit Wednesday as Rand Paul seized the spotlight in his March 6 filibuster. Rand Paul -- not this author's favorite before -- is probably now the 2016 front-runner for president. But the difference results from fundamental changes in substance.

How can one day be that big of a deal? Because Rand Paul demonstrated a reproducible, winning formula. It was as if Ronald Reagan were granted just one day to come back to Earth to remind the Party of Lincoln of "how it's done." Rand demonstrated a repeatable formula that all Republicans can copy. It is the template that is significant. 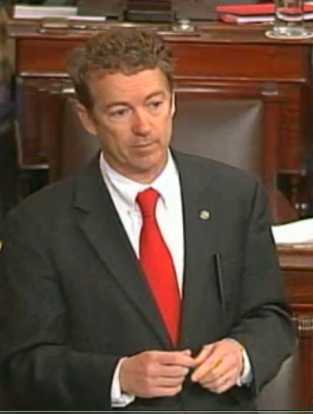 But was March 6 "Republicans' Last Stand" or "Rand's First Stand?" What is most optimistic as the basis for this analysis is that Republican senators started showing up. The Senate floor was more crowded at 10:00 and 11:00 PM than it was at 6:00 PM. They felt it. They saw it. They "got" it. (Excepting one superannuated senator from Arizona.) It clicked. In other words, Republicans might possibly do more of same. If Rand disappears back into the woodwork, then March 6 will have meant nothing.

Freshman Texas U.S. Senator Ted Cruz "got it." Cruz was all over it. Cruz gave voice to the moment best of all. Cruz threatened to go way over the top, reading from the movie "Patton"  and Henry the Fifth's St. Crispin's Day speech on the eve of the Battle of Agincourt. Yet somehow, flirting with serious rhetorical dangers, Cruz captured the moment just right. Like a roller coaster, you gripped the car fearing Cruz was going to fly off into mid-air, yet to our great surprise Cruz hit his mark. He grasped the significance, to put it mildly. Cruz praised the raw bravery of "We few, we happy few, we band of brothers" rather than those who die a thousand deaths in the thicket of their own worried thoughts.

• Rand Paul shoved Obama's agenda off the public stage. Just getting the political world talking about Republicans' message instead of Obama's means Republicans are winning and Obama is losing.

• Rand picked his issue very carefully. He chose the hill he wanted his opponent to die on. Rand showed what happens when you wisely pick the right issue to defeat your opponent with.

• Yet Rand's issue seamlessly fit within his larger philosophy. He didn't just take a cheap shot. Rand chose an example that proves his larger point. As a caller to the Chris Plante show on Washington's WMAL said, "the biggest minority in America is the individual." Rand's filibuster fit within Rand's overall defense of individual liberty. The specific point created an effective argument supporting his larger theme.

• Rand advanced his strategic goal. The entire filibuster episode portrayed a radically different image of Barack Obama. Even among low information voters, Obama's public image just took a serious hit. Instead of being the cool guy who loves you, Obama is now the tyrant who reserves the right to kill you any time he feels like it. On an emotional level, Rand Paul undid in one day years of spin about Obama.

• Rand had a sense of the role of theatrical drama. Conservatives are rightly wary of selling an invalid argument. But even to promote the truth, one must understand that humans are emotional beings. Communicating a message in a crowded, busy world requires a feel for the dramatic.

• So Rand did this in a way difficult for the news media to ignore. In politics, if a tree falls in the forest and the news media doesn't report it, it never happened.

• Rand then hammered the issue perfectly. Who can defend U.S. Government drones assassinating American citizens inside America if they are not engaged in any violence? The issue is a blinding searchlight leaving the critters nowhere to hide. You can't say it doesn't matter. And there's no defense.

• Rand focused like a laser beam, anticipating the misrepresentation and caricatures he knew would be attempted. He repeatedly emphasized, probably a dozen times an hour, how modest his request was. He understood how his actions would be lied about, and cut the scoundrels off at the pass. He repeated what he wasn't demanding, what he wasn't arguing. He emphasized how he had voted for Obama's other nominees.

• Rand wasn't careless. His argument withstood scrutiny. And it got scrutiny. Yet he had a solid argument. Democrat Senator Dick Durbin asked about killing Osama Bin Laden. But Seal Team 6 was trying to arrest Bin Laden. It was Bin Laden's violence in resisting arrest that got him killed. Rand repeatedly emphasized that inside the USA the government should arrest people and question them, not assassinate them.

• Rand was nimble. He admitted that he hadn't planned the filibuster. But when the Obama Administration repeatedly confirmed that they believe the president has the authority to murder U.S. citizens inside the USA when they are not actively attacking anyone, Rand saw an opening and pounced. But he had the wisdom to know if it was a good opportunity or not.

Yet the GOP will be lost if it does not learn the lesson and follow Rand Paul's brilliant "teachable moment" example. Winston Churchill quipped: "Man will occasionally stumble over the truth, but most of the time he will pick himself up and continue on." We will see how thick-headed Republicans are if they miss the point.

On the same day that Rand Paul showed us how it's done, Republicans in the U.S. House impersonated overboiled cauliflower and caved in to Obama's massive overspending. The U.S. House skipped the chance to slow out-of-control spending. The Republican House passed a Continuing Resolution at the same $3.6 trillion level -- $700 billion per year higher than Federal spending in 2008. Republicans could have passed a Continuing Resolution at a lower level, especially while objecting that the U.S. Senate has not passed any budget.

This author has often criticized Ron Paul on some issues. When Papa Paul is right, he's right, when he's not, he's not. So Senator Rand Paul really had to earn my favorable opinion. But on March 6 he surely did. Count one very impressed convert here.