Warning: mysqli_free_result() expects parameter 1 to be mysqli_result, bool given in /var/www/html/americanthinker/admin/common/functions/func.general.php on line 126
 Michael Bloomberg and Mayors Against Illegal Guns Caught Lying to the Public - American Thinker
|

Colonel Paul Linebarger's Psychological Warfare (1954, page 1) says of propaganda: "Yet success, though incalculable, can be overwhelming; and failure, though undetectable, can be mortal."  Unfortunate examples of overwhelming success include the following:

Linebarger's own success during the Korean War, however, saved countless lives on both sides.  He showed Chinese soldiers, to whom "surrender" was shameful, that they could "cease resistance" by shouting the words for "humanity" and "duty," zi-ren-dao, to Americans, who then accepted their "surrender."  (Dao, or Tao, is the Asian word for duty, or the Right Way.)  Honest propaganda also saves lives when it discourages people from driving drunk, or texting while driving.  We must, therefore, confine our communications to honest propaganda while we expose the enemy's dishonest propaganda as widely as possible.

"Psychological crime," the term used by Henry Ford, does not refer to an actual criminal offense (although eleven of Mayors Against Illegal Guns (MAIG)'s members are under indictment for or have been convicted of such), but rather the abuse of another person's trust with dishonest propaganda.  Ford himself, despite his awareness of the problem, became a psychological crime victim and unwitting accomplice himself when he accepted as authentic a copy of the Protocols of the Elders of Zion from a Tsarist propagandist named Boris Brasol.  This hard lesson, along with those from the three wars described above, should reinforce to every citizen the danger of dishonest and manipulative propaganda.

One cannot be fined or jailed for a "psychological crime," but the public relations counterpart of the death penalty is available for the cause that one represents.  Linebarger introduced the Propaganda Man, or the hypothetical audience whom we wish to persuade to our point of view.  We are his friend, and he is ours -- but only until he catches us lying to him.  Then it would have been better to have never tried to persuade him at all, for few enemies are more implacable than a friend whose trust we have betrayed.  Ford elaborated as follows:

What kills propaganda is the obvious purpose behind it. One little admixture of self-interest and your effort is wasted. You cannot preach patriotism to men for the purpose of getting them to stand still while you rob them -- and get away with that kind of preaching for very long.

Suppose, for example, that Germany had proven in 1915 that the Lusitania had carried ammunition, which made the ship a legitimate military target despite the presence of civilians.  This would have proven to William Allen Rogers's Propaganda Man, the American citizen to whom he directed countless images of drowned American children, that the United Kingdom had knowingly, willfully, and recklessly endangered the ship's American passengers.  American outrage over Germany's unrestricted submarine warfare could have easily turned squarely against the Triple Entente, and perhaps even in favor of the Central Powers.

This is exactly the kind of outrage we now have the opportunity to direct against Mayor Bloomberg and MAIG, because the organization has just been caught red-handed in a flat-out lie.  The instant MAIG's Propaganda Man realizes that MAIG is lying to him, he will become a firm advocate of the Second Amendment, and an implacable enemy of MAIG and everything it represents.

Joseph Goebbels said that "[i]f you tell a lie big enough and keep repeating it, people will eventually come to believe it."  The Bloomberg-funded ads from Mayors Against Illegal Guns follow Goebbels's advice perfectly.  Here, for example, is a MAIG video of artists repeating "Newtown," "How many more?" "Enough," and "As an American" repeatedly.  This exemplifies the following advice from Mein Kampf: "But the most brilliant propagandist technique will yield no success unless one fundamental principle is borne in mind constantly and with unflagging attention. It must confine itself to a few points and repeat them over and over."

Goebbels also warned, however, that the Big Lie could be maintained only for a certain amount of time unless the government used its authority to stifle dissent.  This is the United States and not a totalitarian regime, so this is simply not going to happen.  We will now expose MAIG's recent ad, in whose circulation Mayor Bloomberg's money had an apparent role, as a lie that is aggravated by the associated description:

Mayors Against Illegal Guns released this ad featuring a gun owner who understands that support for background checks goes hand in hand with support for the Second Amendment and defending their families.

The man in the video is almost certainly not a gun owner, and nobody ever taught him to hunt.  He is probably an actor who was paid to portray a gun owner -- and a stereotypical one, complete with pickup truck and Southern drawl -- so Mayors Against Illegal Guns could claim that even the NRA's constituency supports universal background checks.  Why do we think MAIG is lying?  Its own video provides the evidence, which is the worst imaginable propaganda blunder.

The original reference appears, however, to be wrong about the man's finger being inside the trigger guard.  It is difficult to tell, given the lighting in the video itself, so I took a screenshot and then increased the intensity in Corel PhotoPaint.  His bent finger suggests that it might be inside the trigger guard, but it is actually behind it. 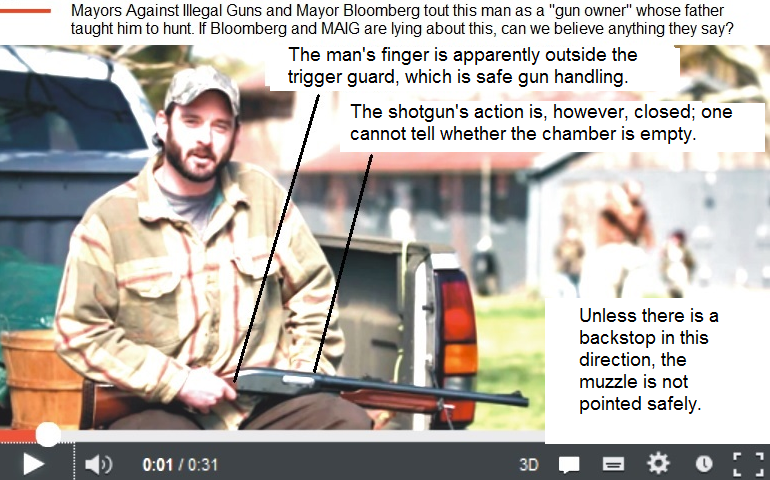 Two violations of basic firearm safety rules suggest, nonetheless, that this man is not familiar with firearms.  Hollywood actors handle guns this way, and even worse, all the time, but real gun owners do not.  We can, therefore, believe with ample cause that Michael Bloomberg and Mayors Against Illegal Guns employed a shill to pretend to be "one of us," when he is nothing of the sort. This, in turn, makes Mr. Bloomberg and MAIG liars.

Colonel Linebarger warned that bundles of leaflets that fail to disperse make little impression on the Propaganda Man, unless one lands on his head -- in which case, it is unlikely to be the impression we want to make.  This scandal can turn the enemy's $12-million ethical lapse into a far more costly public relations catastrophe, but only if it circulates widely via the internet and other media.  The instant the Propaganda Man wakes up to the fact that Michael Bloomberg and Mayors Against Illegal Guns have abused his trust, it will be all over for the latter's credibility and cause.