Looking Beyond the Budget Duel

For the past two years, usgovernmentspending.com has featured the budget resolutions authored by the Chairman of the House Budget Committee, Rep. Paul Ryan (R-WI), so U.S. citizens and others could compare the GOP vision of the future with the president's vision.

Unfortunately, all during this period the Senate Budget Committee, despite earnest efforts, failed to produce a budget resolution as required by law. But now, under the able leadership of Sen. Patty Murray (D-WA), the Senate committee has produced a budget for FY14 and beyond and usgovernmentspending.com is now able to present both the Ryan budget and the Murray budget for comparison at usgovernmentspending.com.

Unfortunately, the president has not yet submitted a budget to Congress as required by law, so we cannot compare the efforts of the two solons with the budgeting effort of the Office of Management and Budget. But the OMB budget is expected to be published on April 8, 2013.

Meanwhile, we have the two budgets from Congress. Although the two proposals are not exactly comparable, we have tried to juggle the numbers to make the categories nearly comparable.

If you look at the two budgets there is one big difference between them: Medicaid. Under the Murray budget Medicaid spending expands sharply. Under the Ryan budget, it doesn't. That's because Ryan zeroes out ObamaCare. The big little secret in ObamaCare, remember, is a huge expansion of Medicaid. 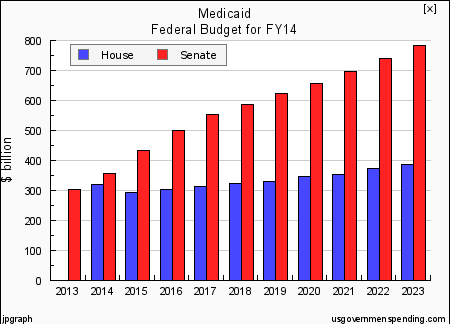 Here's a chart of overall spending. It shows the difference in budgeted Total Outlays between Ryan and Murray. 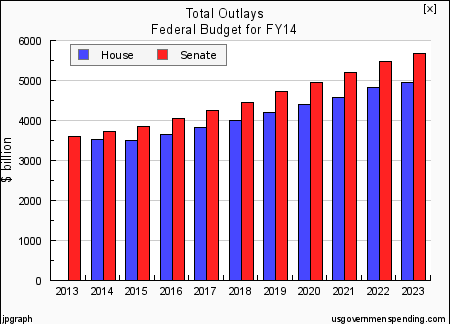 Of course, neither budget is the real Rx for the economy. Reihan Salam points this out. The Ryan plan waits to cut Medicare till 55-year-olds are ready to retire, and doesn't touch Social Security: older Americans tend to vote Republican. The Murray budget doesn't cut anything because Democratic voters are low-income adults, union members and health-care workers, students and educators, and tax-the-rich professionals. They look at increased government spending on people like them and like what they see.

But the bigger issue is the problem raised by John C. Goodman at the National Center for Policy Analysis. The official federal budget outlook is meaningless because the Obama administration doesn't want to admit how much ObamaCare is going to cost.

Unwilling to raise the taxes needed to pay for this entitlement, the administration decided to fund almost half the cost by robbing Medicare. The figure is $716 billion over the next decade, but that's just the beginning. Under the Affordable Care Act, Medicare is set to grow only a tiny bit faster than the growth of national income -- forever!

In other words, the Obama administration forecasts that "Spending on the elderly and the disabled will be growing at one rate while the rest of the health care system will be growing at twice that rate." One way they plan to do this is by cutting Medicare provider fees below the rate for Medicaid. Grannie's doctor will get less money that a welfare mother's doctor, and many doctors already refuse to see Medicaid patients because the reimbursement rate is so low.

But that's not all. Shafting grannie won't save enough money to pay for the extra Medicaid. So the administration is going to limit the rate of increase in the ObamaCare subsidy for private health insurance. Probably, therefore, according to Goodman, "The new law will force all of us to purchase insurance whose cost is likely to grow at twice the rate of growth of our incomes."

You can see what is coming, as all these budgets and phoney-baloney health-care assumptions work themselves out. It will be the most almighty train wreck you ever saw.

You can't help asking what President Obama and his team thought they were doing selling ObamaCare with their ridiculous assumptions. The answer is, no doubt, partly that they believed their cant about "bending the cost curve," and partly that the ten-year cost had to come in below $1 trillion.

How will it all play out? I suspect it will start with a wipeout in the 2014 midterms, despite all the brave talk about taking back the House.

And then? Then we will see the blame game get started. Generally, in all the best societies, the king takes the fall. But in our society, the Republicans are always to blame.

Christopher Chantrill (mailto:mailto:chrischantrill@gmail.com is a frequent contributor to American Thinker. See his usgovernmentspending.com and also usgovernmentdebt.us. At americanmanifesto.org he is blogging and writing An American Manifesto: Life After Liberalism.