Warning: mysqli_free_result() expects parameter 1 to be mysqli_result, bool given in /var/www/html/americanthinker/admin/common/functions/func.general.php on line 126
 A Violent Kind of Silence - American Thinker
|

A Violent Kind of Silence

Remember the feminists of the '60s?  Women's liberation?  Remember the women who made feminism the issue of the day?  They demanded roles in government, careers, independence, and the right of women to control their reproductive lives.  They marched and formed NOW, which describes violence against women as one of their core issues.

The book that started the second wave of feminism was The Feminine Mystique, by Betty Friedan, the doyenne of feminism, who described the bored housewife in the suburbs as the "problem that has no name."

On the other side of the world, we can see many problems for women in Muslim societies.  But contrary to Friedan, these problems "have names": honor-killing, 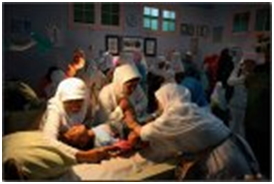 stoning for adultery, rape, child marriage, sex slavery, and female genital mutilation (FGM).  FGC/FGM (pictured at right) refers to all procedures involving partial or total removal of the external female genitalia or other injury to the female genital organs for cultural or other non-medical reasons.  Type 2 is the excision of the clitoris, with partial or total excision of the labia minora. Most girls and women are traumatized from this; many die of infection, and those who survive suffer complications during pregnancy and childbirth.

FGM  is a barbaric practice widespread in many countries, but the vast majority are either Muslim-majority or home to a large number of Muslim immigrants.  Those who claim that it is "cultural" fail to link the approval given to it by Reliance of the Traveler, a manual of Islamic jurisprudence certified as "reliable" by Egypt's Al-Azhar University.

Child marriage is another problem in Muslim countries, following the example of Mohamed himself, who at 53 married Aisha, a six-year-old, and consummated the marriage when she was a child of nine.  Yet Muslims believe that Mohamed provided a "beautiful pattern of conduct."  The number of child brides is on the rise -- the Grand Mufti of Saudi Arabia, Sheikh Abdul Aziz bin Abdullah, recently issued a fatwa authorizing marriage to girls as young as 10 years old, and in 2011, a similar fatwa by Salafi preacher Sheikh Mohamed al-Maghrawi permitted girls as young as nine to marry.  So here you have children subjected to the destruction of their innocence and sold for abuse.  The New York Times reported on this phenomenon in Yemen, where a nine-year-old ran away from her husband and demanded a divorce because of sexual abuse.  And in Britain, authorities are now reporting the forced marriage of girls as young as nine on British soil.  By contrast, Betty Friedan was outraged that young women of 19 and 20 chose to drop out of college to get married.

Rape of women is not uncommon.  The reporter Lara Logan was viciously raped in Egypt during the "Arab Spring."  In fact, sexual harassment and rape have increased dramatically since Morsi's rise to power.  Recently, to quell the opposition, Morsi's Muslim Broherhood paid gangs and thugs to rape protesting women in the streets.  Also, an Egyptian Salafi preacher described the Coptic Christian women who protest at Tahir Square as "crusader prostitutes who go there to be raped on purpose."

This presents a unique problem for women in the Muslim world, since they are often afraid to report sexual assaults for fear of reprisals from their families.  Some women are blamed for the rape, and others who are married end up being divorced if their husbands find out.  For example, in 2009, a Saudi woman who had been gang-raped was sentenced to six months in jail and 200 lashes.  And John Kerry, our new secretary of state, just announced a package of $250 million in American aid to support Egypt's "future as a democracy."

Another issue for women and girls is sex slavery.  It is estimated that 27,000,000 people throughout the world are enslaved in the sex trade today, and 2,000,000 of these are children.  Not all are Muslims -- indeed, the majority probably are not -- but Islam condones sex slavery.  Muhammad captured slaves in battle, had sex with them, and instructed his men to do the same.  The Qur'an contains numerous verses assuring Muslim men that they can keep women as sex slaves.

But these examples are all in the far-off lands of the Arabian Nights, right?  No.  Lars Hedegaard, president of the Danish Free Press Society, who recently ducked a bullet to his head, was initially tried in Denmark because of private remarks he made about sex abuse in Muslim families.  Theo van Gogh was assassinated in Holland for making the film Submission, which highlights the repression of women in some Islamic cultures.  In the U.K. just last month, three Muslims were found guilty of abducting a 13-year-old infidel schoolgirl in London, where she was kept as a sex slave.  In another incident in the U.K., a group of Muslim men sexually exploited and raped six girls between the ages of 11 and 15 from 2004 to 2012.

Closer to home, Muzzammil Hassan, from Buffalo, NY, beheaded his wife in 2009.  This was not simple domestic violence; it was an honor-killing, defined as "a murder carried out as a commission from the extended family, to restore honor after the family has been dishonored.  As a rule, the basic cause is a rumor that any female family member has behaved in an immoral way."

In 2008, there was the tragic killing of Amina and Sarah, 18 and 17, respectively, in Texas by their father because the daughters had adopted "Western ways."  While honor-killings are just a minority of total domestic violence in the United States and Canada, according to a study of 50 instances in North America, Phyllis Chesler concluded that they represent a distinctive phenomenon and can be differentiated from domestic violence.

Some interpret the punishment in Islam for adultery as death by whipping or stoning, while many deny this.  A brief study of the question reveals that it depends on the particular country and its interpretation of sharia law.  Stoning still exists in Iran, Saudi Arabia, Afghanistan, and Pakistan.  This YouTube shows a stoning from 2010.

So here we "have names": honor-killing, rape, stoning, child marriage, sex slavery, and FGM.  Never in the history of the United States have we had such powerful women in office: Hillary Clinton; Nancy Pelosi; Valerie Jarrett, who drags the title of chair of the White House Council on Women and Girls; Susan Rice; Kathleen Sebelius; Human Abedin.  Yet the radical feminists have been strangely silent on the oppression of Muslim women.  Granted, "Global Women's Issues" by the State Department has taken a strong position against female genital mutilation.  But we need more than just words.  Action must be taken.

These practices constitute violence, plain and simple.  They continue to leave scars on women and children -- and now we have documentation of a group in the U.K. that stopped the forced marriage of a two-year-old!  The inherent dignity of women has been a part of the Judeo-Christian culture in the West, and women are treated with honor.  And civilized countries have always given protection to the  innocent.  Is a woman held in sex slavery "controlling her reproductive life"?

Nonie Darwish, who left Islam, in commenting on a movie she saw on marriage, says she was struck at the "holiness of the marriage vows, especially when the husband promised to love, honor, and cherish his one and only wife 'till death do us part[.]' ... [M]y innocent mind was touched ... by the way a Christian woman was honored and elevated by her husband and society[.]"

Think of the young girl in Yemen who ran away from a marriage.  When asked why, she said, "I thought about it...I thought about it."  Anyone who does give it thought realizes that the body and the sexual act have more than just a physical meaning.  Through it we see the face of "another," someone outside pure biology and anatomy.  Something within us, our inner being, recognizes that the body has a deeper existential meaning.

But these practices which have names reflect the stranger's body as a "thing" to be used, to be borrowed like a car.  The radical feminists in their utilitarian pursuits of control over their reproductive lives seem not to have given this much thought.  We're waiting to hear them break their silence.