Warning: mysqli_free_result() expects parameter 1 to be mysqli_result, bool given in /var/www/html/americanthinker/admin/common/functions/func.general.php on line 126
 The Media Threat to Democracy - American Thinker
|

The Media Threat to Democracy

Ann Coulter, in a recent Kudlow Report, enraged the punditry by suggesting that the mainstream media was a threat to democracy.

"I mean, you really wonder if Democrats would win any elections if we had an honest media in this country," Coulter said. "As Pat Caddell says, the media is becoming a threat to democracy."

In the runup to the last presidential election, Pat Caddell, a Democratic pollster and staunch liberal, said,

"I think we're at the most dangerous time in our political history in terms of the balance of power in the role that the media plays in whether or not we maintain a free democracy or not."

Coulter and Caddell, both experienced media professionals, have given voice to what many Americans believe is the principal threat to American democracy: the progressive liberal mainstream media.

I have absolutely no doubt that Barrack Hussein Obama won election and re-election on the strength of mainstream media support for him and his leftist ideology. It certainly wasn't that Obama had distinguished himself in his career. He had accomplished nothing other than getting himself elected to office, and he did that by dazzling the mainstream media. He had few, if any, qualifications for the presidency. And he has yet to satisfactorily prove to many that he is even eligible for the position. How then does someone like Obama get elected and then re-elected after a disastrous first term? 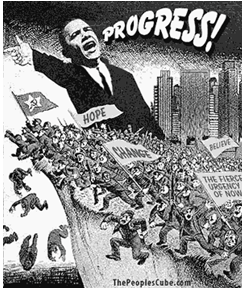 Today, the mainstream media -- ABC, NBC, CBS, MSNBC, CNN, the New York Times, the Chicago Tribune, the Boston Globe, the LA Times, Newsweek, Time, and all the other mainstream media outlets -- are unabashedly liberal. They have also been integrated into the inner workings of the Democratic Party and the United States government. The Obama administration tells the mainstream media what to report and how to report it. We now have a government-controlled press, not a free press.

Early in my career I needed to obtain certification to teach technical information to mostly non-professional people. The certifying organization immersed my class in instruction on how to reach into people's minds and make them learn what you have to teach them. Education is not as easy as it might look to some. There is an art to the craft. We were taught that the most effective medium for learning was via visual process: television or a live presentation are the best media for education.

People emulate what they see on television. Copycat killings are a good example. I believe the television media is responsible for more children being killed in schools than any other single factor. The widespread sexual deviancy in our society is another example of media influence. Once people see what is possible on television they believe it is possible, even acceptable, for them to do. When television began to show males wearing earrings and bandanas on their heads, and females sporting tattoos, we saw an immediate flood across the nation of males wearing earrings and bandannas and females getting inked. Monkey see, monkey do. Look around.

Television tells society what is cool and acceptable. People emulate what they see on TV. They believe what the media pundits tell them. The media has been telling the American people for the past fifty years that liberalism is good and conservatism is bad. Many people now believe this.

The Medium is the Message 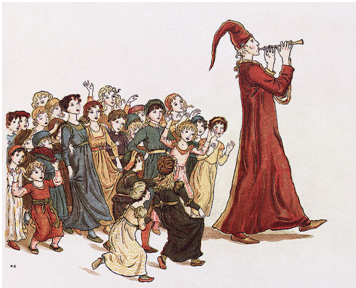 Marshal McLuhan was a communication theorist who made an impact in media theory in the 1960s, a time when the media was beginning to realize its power. He coined the phrases "global village" and "the medium is the message". McLuhan introduced us to the notion that the medium itself was just as important, if not more important, than the transient content it conveyed to us. The phrase, "the medium is the message", was introduced in his 1964 book, Understanding Media: The Extensions of Man. He gives us chilling examples of what the media actually represents to us:

"...the message of a newscast about a heinous crime may be less about the individual news story itself -- the content -- and more about the change in public attitude towards crime that the newscast engenders by the fact that such crimes are in effect being brought into the home to watch over dinner.

The media subjects us to a constant barrage of information and themes. It enters into our living rooms and we watch a continuous parade of scandal, gore and mayhem as we casually eat our dinners. Bloodshed, terrorism and crime become easy as pie.

Think about how the media frames its message and whom they use to present it to us. When you think of Chris Matthews, Andrea Mitchell, Rachel Maddow, Bill Moyers, Ed Shultz, or Piers Morgan, do you think of trustworthy, objective individuals who are earnestly doing their best to bring you information you need to make decisions?

Or do you think of them as progressive propagandists actively working their leftist agenda? Which are they? They are the ones preparing the meal and serving us dinner.

The media personalities are as important to conveying information and impressions to us as is the news content they are delivering. The medium is the message. Their liberal predilections are inserted into every sentence, every phrase, every sound bite and video clip they present to us.

"McLuhan describes the "content" of a medium as a juicy piece of meat carried by the burglar to distract the watchdog of the mind. This means that people tend to focus on the obvious, which is the content, to provide us valuable information, but in the process, we largely miss the structural changes in our affairs that are introduced subtly, or over long periods of time. As society's values, norms and ways of doing things change because of the technology, it is then we realize the social implications of the medium. These range from cultural or religious issues and historical precedents, through interplay with existing conditions, to the secondary or tertiary effects in a cascade of interactions that we are not aware of."

This observation is critical to understanding what the media is doing to us. The mainstream media are changing us gradually. They are corrupting us in a most insidious fashion. While pretending to present to us a factual analysis of world events, they are actually insinuating their progressive values, opinions, judgments and propaganda, with the deliberate objective of controlling our thinking and beliefs. This is done intentionally and without apology.
To the media propagandists, the ends justify the means. We are becoming a nation of immoral, dependent, tattooed media consumers who will follow wherever the media leads us, like the children led by the Pied Piper of Hamlin to their destruction.

We are witnessing a marriage of the progressive media with a progressive government regime, an unholy alliance in terms of the American ideal. The end result is the certain destruction of freedom and liberty in America. History is a good guide in this matter.

Obama meets with Rachael Maddow, Lawrence O'Donnell, Ed Schultz and other "influential progressives" to give them his thoughts on how he wants the news reported to the public. In exchange for access to White House officials, media stars have agreed to the censoring and editing of their stories. Obama and his ilk have criticized Rush Limbaugh and Fox News, implying that they are on dangerous ground when they report stories unfavorable to the regime.

The Democratic Party has infiltrated the mainstream media, sending its best and brightest to work as news reporters and television journalists. George Stephanopoulos was the White House Communications Director and political consultant for impeached President Bill Clinton. He is currently is chief political correspondent for ABC News, hosts the ABC show This Week and is co-anchor of Good Morning America.

Robert Gibbs, former Obama Press Secretary, and David Axelrod, Obama's principal media and campaign advisor, are both going to work for NBC and MSNBC as media "contributors." Gibbs has assured us he won't be "a cheerleader for the president" and Axelrod promises he "will be honest with my opinions." Who can believe anything they say? Obama is famous for his Orwellian doublespeak and misdirection. At no time has the Obama administration been truthful with the American people about its actions and objectives. The fact is that the administration and the media routinely work together to deprive the American people of the truth. This is necessary to the progressive agenda.

At a recent press conference on gun control in Philadelphia, Vice President Joe Biden said, "To be very blunt with you, we're counting on all of you, the legitimate news media to cover these discussions because the truth is that times have changed."

Biden is telling his media -- his progressive Democratic Party media, the legitimate media -- that he is depending on them to facilitate the administration's attack on the Second Amendment. The administration has an ardent following on gun control in the progressive media. They are glad to be the juicy meat used by the burglar to distract the watchdog of the mind. The mainstream media is no longer our watchdog: they belong to the progressive left.

J.T. Hatter is the author of Lost in Zombieland: The Rise of President Zero, a political satire on the Obama administration. J.T. can be reached at mailto:jt@jthatter.com.