In a recent interview, Al Gore lamely defended the sale of his ailing Current TV channel to Al Jazeera because of the network's strong coverage of Climate Change -- something which Al Gore thinks the American media needs to emulate.  Shockingly, Gore extolled Al Jazeera as a respectable independent news agency, even though the network is funded by oil-rich Qatar.  Qatar belongs to the OPEC cartel, which is a conglomeration of giant state-owned oil companies that manipulate oil markets and help fund Middle Eastern terrorism.

One of the reasons why Al Gore was impressed with Al Jazeera's coverage of Climate Change is because Michael Mann, the poster boy for the global warming and/or climate change apocalypse, has been extensively featured by the pan-Arab network.  In 2012, Michael Mann was interviewed three times by Al Jazeera on the network's Inside Story Special Report.  Mann, professor of meteorology and the director of the Earth Systems Science Center at Penn State University, is the leading prophet of climate change Armageddon.  Mann was at the center of the Climategate scandal when thousands of  e-mails from East Anglia's Climate Research Unit (CRU) were released, exposing embarrassing correspondences among scientific colleagues bent on warning the world about the imminent global warming apocalypse.  Thanks to Climategate, Mann is widely known for his "nature trick," which he used to help "hide the decline" by piecemealing together disparate sets of data -- all so that his infamous hockey stick graph could show unprecedented global warming over the past 50 years. 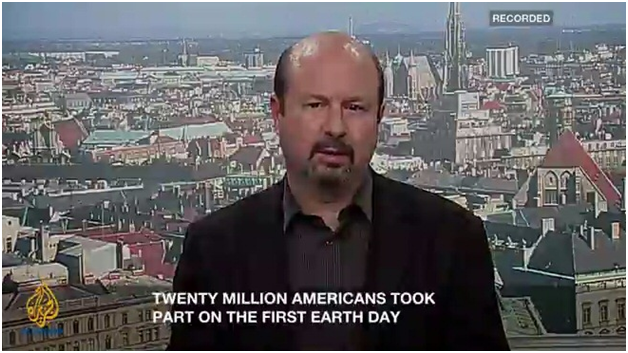 In celebration of Earth Day, Al Jazeera interviewed Michael Mann on April 24.  During the interview, Mann called on Obama to free up his environmental all-star team that the president appointed in order to assert their implementation of climate change policies.  The Obama all-star team Mann celebrated included environmental zealots John Holdren and Lisa Jackson.  Holdren views capitalism as inherently harmful to the environment and has been warning of apocalyptic eco-catastrophes since the 1970s.  Jackson was the head of the EPA during the first four years of Obama's administration.  In 2012, she was embroiled in a serious controversy over medical experiments where human beings were purposely subjected to diesel fumes the EPA already said were lethal.  During the experiments, diesel fumes mixed with air coming from a running truck just outside the building were piped directly into the lungs of volunteer patients who were placed inside a gas chamber.

The last time experiments with exhaust fumes were conducted on humans for "scientific research" was when Nazi euthanasia experts were looking for a more efficient means of liquidating the Jews.  In contrast, of course, environmental zealots are trying to liquidate the modern carbon economy.  However, under the guise of acting on behalf of everyone's health, the EPA has crossed a pathological line into territory where people potentially have been treated like experimental animals under questionable methods that conjure up the horrors of the Holocaust.

Yet Michael Mann and Al Gore, like so many other green prophets of doom, are fond of using the derogatory caricature "denier" to portray climate skeptics as a group of uneducated, backward reactionaries metaphorically akin to Neo-Nazi Holocaust-deniers -- an issue discussed during the Earth Day interview.  However, greens like Mann should perhaps look in the mirror.  The German Green Party chairman, Claudia Roth, recently high-fived Iranian ambassador Ali Reza Sheikh Attar at a security conference in Munich.  According to the Jerusalem Post, Roth visited Iran in 2010 donning a head scarf and met with Iranian leaders who are Holocaust-deniers and supporters of the destruction of Israel.  Even Al Jazeera has been highly instrumental in the promotion of anti-Semitism in the Middle East. 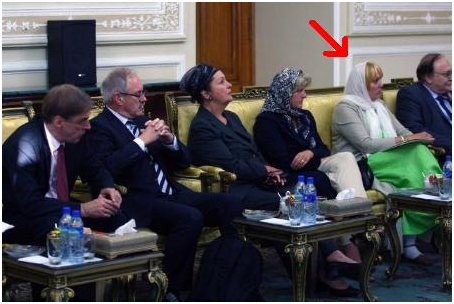 Environmentalists like Mann and Gore are also unaware that one of the latest persons to be charged with Holocaust-denial was Ursula Haverbeck, the wife of Green Nazi Werner Haverbeck.  Werner Haverbeck (1909-1999), former Hitler Youth member and Nazi environmental leader of the Reich's League for Folk National Character and Landscape, was heavily involved in the establishment of the German Green Party during the late 1970s and early '80s, along with Austrian Nazi Guenther Schwab (1904-2006).  In fact, many of the original card-carrying National Socialists in the 1930s and '40s were greens.

Green Nazi Guenther Schwab himself was one of the original popularizers of the global warming apocalypse.  While some scientists dating back to the 1800s had theorized the possibility of minor global warming coming from industrial pollution, in 1958, Schwab converted this scientific theory into an apocalyptic crisis that would eventually flood the lowlands of the earth with the melting of polar ice due to the rise of unprecedented CO2 levels.

Michael Mann believes likewise.  During his interview on Earth Day, Mr. Mann made it clear that unless climate change is taken seriously, rising CO2 levels will destroy the environment and the economies of the world.  Mann prophesied that by the end of the century, the planet will warm up by 8-10 degrees Fahrenheit.

Eager not to let any weather crisis go to waste, Al Jazeera and Mann got together again: with two long interviews after the Colorado wildfires in July, and then more airtime after Hurricane Sandy in late October.  Mann warned Al Jazeera viewers that such disasters are only harbingers of more extreme weather events yet to come thanks to rising CO2 levels.  In fact, according to Mann, the atmosphere has fundamentally changed over the last century, sea levels have risen by a foot, and the last 20 years have been the hottest in 400 years.  As such, the world has only five to ten years to make drastic environmental regulatory changes in order to avoid disaster.  Mann wants to hold the earth's thermostat at 2.5 degrees Centigrade above pre-industrial times.

It is truly astonishing to watch Mr. Mann complain about big-money corporations in America without the slightest concern that he was being interviewed by an Arab network funded by an OPEC nation -- the very ground zero of big oil and its internationalized carbonized weather that has ties to terrorist activities.  Environmentalists like Mann and his extremist colleagues have already cost the U.S. economy dearly over the last two decades because of their green ideology favoring nature over people.  Now the environmentalists have a new rich ally with the addition of an Islamic green agenda.  Even the emir of Qatar, Hamad bin Khalifa Al Thani, who was also instrumental in the founding of Al Jazeera, has entered into the climate change debate, alongside Al Gore and Michael Mann, by taking steps to begin converting his nation into a green mecca.

However, Mann's new Islamic friends are undoubtedly far more interested in using American environmental regulations to weigh down the present U.S. shale gas boom and the great successes of oil fracking that will invariably cut into their bottom lines than they are in the environment.  In fact, Al Jazeera's collaboration with Michael Mann and Al Gore mimics the United Arab Emirates' funding of Matt Damon's anti-fracking movie, Promised Land.  If the gas and oil boom continue, at some point, America may no longer even need Middle Eastern oil.

It should therefore come as no surprise that the sheiks are more than willing to spend $100 million to buy off Al Gore and give Mann interview time to tout his doomsday warnings.  What do the Arabs get for a return on their investment?  Al Gore and Michael Mann work arm-in-arm with Muslims to make sure the United States is never able to become energy-independent even though North America is sitting on oceans of oil.  On the other hand, environmental zealots of the global warming apocalypse have also received new life thanks to oil and blood money coming from the Middle East via Al Gore and the sale of his TV channel to Al Jazeera. 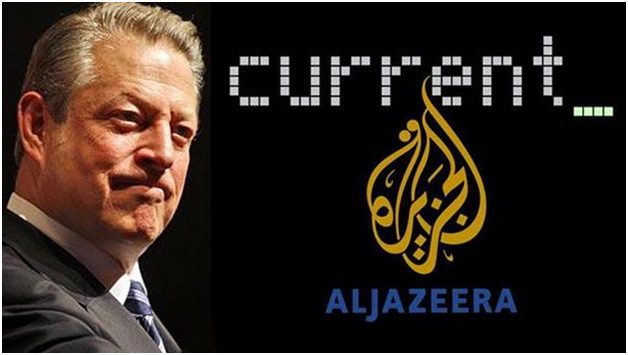 Mark Musser is a contributing writer for the Cornwall Alliance, which is a coalition of clergy, theologians, religious leaders, scientists, academics, and policy experts committed to bringing a balanced biblical view of stewardship to the critical issues of environment and development.  Mark is also the author of Nazi Oaks: The Green Sacrifice of the Judeo-Christian Worldview in the Holocaust, which has been recently expanded, updated, and republished.