Connecticut Congressman Joe Courtney is right to be upset with the Steven Spielberg movie Lincoln's historical inaccuracy. The Democrat from the Constitution State was suspected by some Hollywood conspiracy theorists of having an ulterior motive in trying to set the record straight.

Some went so far as to say that the real reason Congressman Courtney was weighing in at this time was that he wanted to aid his high-profile contributor, Ben Affleck's, Oscar bid for Argo. Affleck had given Courtney help on the hustings when he needed it.  Now, as the Washington saying goes, it was time for Courtney to scratch Ben's back. 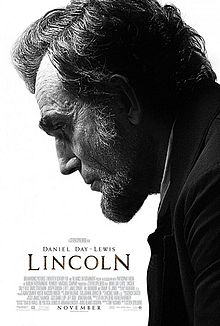 commitment to Civil Rights is impugned. Screenwriter Tony Kushner admits he took - ahem --liberties with the chronicle of liberty. In bringing to the screen one of the most important congressional votes in 224 years, Kushner wanted to heighten the drama of the passage in the House of Representatives of the Thirteenth Amendment. Kushner wanted to show that, like the Battle of Waterloo, the amendment to abolish slavery was "a near run thing."

Not one of Connecticut's four House members voted No in that epochal legislative achievement in January, 1865. We should never permit the desire for a good yarn to tarnish good men and true. Those Connecticut congressmen of 1865 had doubtless read President Lincoln's State of the Union Message of 1862. He spoke to all those holding office and power in those war-torn years.

He did not deliver his State of the Union Address in person, as President Obama recently did. But his words are with us still:

Fellow-citizens, we cannot escape history. We of this Congress and this administration, will be remembered in spite of ourselves. No personal significance, or insignificance, can spare one or another of us. The fiery trial through which we pass, will light us down, in honor or dishonor, to the latest generation.

Congressman Joe Courtney wants to light those Connecticut representatives in honor. He wants their commitment to liberty remembered. We should, too.

That raises another question, however. Joe Courtney is a Democrat. While he rightly praises Connecticut's contribution to the victory of the Union and to the abolition of slavery, he may also be aware that every vote cast against the Thirteenth Amendment was cast by a Democrat. For half a century prior to the Civil War, his party was unfortunately the main defender of the States' Rights Doctrine that kept slavery alive. 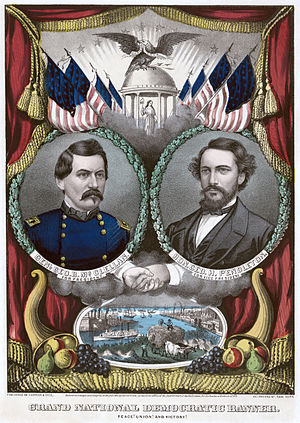 During the Civil War, pro-Union Democrats lent their aid to preserving this last best hope of earth, yes, but most of them stubbornly opposed freeing the slaves. In 1864, President Lincoln ran against a Democratic presidential nominee who was famous for his hostility to the slaves. Gen. George B. McClellan had the "slows" when it came to pursuing and defeating Confederate Gen. Robert E. Lee, but he was quick to advise Lincoln on the slavery question.

The leading Democrat in the country made no secret of his opposition to Lincoln's Emancipation Proclamation. Lincoln took a huge risk in dismissing McClellan from his post as Commanding General of the grandly named Army of the Potomac. There was even loose talk in McClellan's army camp of marching on Washington and overthrowing Lincoln's administration.

To his credit, McClellan was having none of that. Instead, he would seek to replace Lincoln at the ballot. To his even greater credit, President Lincoln quickly dismissed any thought of postponing the 1864 elections. If the rebellion could force such a postponement, he said, then they would already have achieved their goal of showing that a government of the people, by the people, for the people was not possible.

That 1864 campaign was one of the ugliest on record. Democrats campaigned for a negotiated peace that would leave slavery in place. "The Union as it was; the Constitution as it is," they cried. And many of their ward-heelers added this foul sentiment: "...and the n______ where they are." By saying "the Constitution as it was," they meant without a Thirteenth Amendment, without the liberating impetus of an Emancipation Proclamation.

Our purpose here is not to impugn today's Democrats. The modern Democratic Party's commitment to civil rights -- beginning with the 1948 Platform and Harry Truman's upset victory against New York Gov. Thomas Dewey (R) -- is sincere and has been demonstrated again and again. The reason U.S. Senate candidate Hubert Humphrey sweated through the night in that raucous 1948 Democratic National Convention to force his party to stand for human rights was because he knew that Gov. Dewey's record on Civil Rights was a strong one. And so had been the record of every Republican on that issue since Lincoln.

The movie Lincoln got the votes of the Connecticut delegation wrong, true, but it also missed two other important events. It should have shown Lincoln signing the Thirteenth Amendment. Presidents' signatures for constitutional amendments are not required. Lincoln's act of signing this one should put to rest any doubts about his deep personal and public commitment to freedom.

Also, the movie might have shown the great abolitionist editor, Frederick Douglass, patiently waiting his turn to congratulate the re-inaugurated president on March 4, 1865. It was the first time in history a black man was invited to a White House inaugural reception. Someone tried to bar Frederick's entrance. But he found an open window and climbed through it. He had been climbing through open windows all his life.

When Lincoln saw the tall orator standing at the end of the receiving line, he called out:

"Here's my friend, Douglass. Come here." Lincoln pumped Douglass's hand and asked him what he thought of his Second Inaugural Address. "Mr. Lincoln," Douglass said warmly, "it was a sacred effort."

We welcome Democrats admiring Lincoln. We agree with them that his commitment to freedom lights him down in honor to the latest generation. Now, we appeal to them to show the same concern for millions yet unborn that Lincoln showed for millions then in chains.