Warning: mysqli_free_result() expects parameter 1 to be mysqli_result, bool given in /var/www/html/americanthinker/admin/common/functions/func.general.php on line 126
 The Collectivist Mind Game, Part 1: Demonizing the Non-Compliant - American Thinker
|

In the libertarian sci-fi classic, "The Moon Is a Harsh Mistress," Robert A. Heinlein describes a successful revolution of the individualistic, free-market-oriented residents of the Moon against the Earth's tyrannical big government.  The ins and outs of agitating and organizing the masses to fight the oppressive Authority feel just as realistic as the finer points of everyday life in the underground Lunar cities of the future.

The proposed revolutionary scenario could even serve as a workable model for similar real-life endeavors, if only the renowned futurist author hadn't neglected to factor in the immanent function of any oppressive regime: systemic brainwashing of its subjects through the media, education, and entertainment channels.

If the tyrants on Earth were worth their salt, all the freedom-loving colonists would be subjected to an intense, manipulative indoctrination, which would shape their self-image as small and sinful "little guys" vis-à-vis  the powerful, virtuous government that serves the powerless and protects them against all enemies, including themselves.

Thus, the government's propagandistic narrative would establish the illusion of a society divided into three major classes: the ruling government class, endowed with benevolent powers to guide or punish; the majority class of hapless losers, whose survival depended on the government's largesse and protection; and an unquantifiable class of demonized mysterious enemies of the government and, by extension, of the people, who would be the perceived culprits of all failures, hardships, and misery of the little guys' everyday existence.

The majority class would itself be divided into an assortment of narrow-interest groups, held together only by the glue of government's redistributive, pacifying and equalizing powers, as well as by their shared hostility towards the designated "enemies."

The prevailing feelings in such a society would be the collectivist fervor, envy of individual achievers, fear of chaos in the absence of the government's protection, hatred of anti-government elements, and hope for a better future once all the hidden enemies are unveiled and eliminated.

This makes Heinlein's scenario of a free-market revolution highly unlikely.  No self-respecting oppressive regime would start a crackdown on the rebels without priming the population with a mass-media campaign that would show how big government benefits most of the people, and how the resistance is destroying the lives of the common folk.  As a minimum, the government would parade a poor little girl crying on camera because she and her family suffered from the hands of the rebels.  Even those who didn't hate the rebels before would hate them now.

In a society shaped by the government's mind games of manipulative illusions, a dissenter sticks out like a sore thumb.  Once the resistance has been demonized, its members will be quickly identified and denounced by the compliant citizenry, labeled as the enemy, and be dealt with by law enforcement.

In the end, the self-preservation of modern-day totalitarianism is ensured, not so much by the secret police with its army of snitches and brutal enforcers, as by modern technologies of psychological manipulation through the media, education, and entertainment.

Perhaps, Heinlein's tyrannical regime came off so hapless because the author had had no experience of living in a totalitarian statist system.  Writing The Moon in the early 1960s, he likely modeled the actions of the Lunar Authority on the methods used by the U.S. government against the Communists.  And, as we now know, the U.S. government failed that mission, just like the Lunar Authority did in Heinlein's novel.

The FBI mostly relied on surveillance, infiltration, and recruiting of informants.  Occasional amateur propaganda designed to immunize Americans against the seductive statist rhetoric turned out to be a flash in the pan.  It was child's play compared to the vast arsenal deployed by the KGB and its affiliates in Communist countries.

The United States at the time didn't have an all-encompassing, totalitarian propaganda machine like its enemies did.  State-enforced mind control, by definition, is incompatible with the principles of living in a free world.  Statists, on the other hand, have no such limitations; playing mind games for them is a way of life.  This makes it asymmetrical warfare.

Statists, of course, would like to have everything shared -- except their power.  In free democracies they always demand their share of political power -- and always get what they want.  However, once they are in power, they keep it to themselves and demonize the opposition.

The Marxist ideal of Communism is an altruistic collectivist society of the future, in which there will be no need for government, family, or private property.  Freed from capitalist exploitation, people are expected to unleash their full potential and create unprecedented material abundance.  The selfish notion of the pursuit of individual happiness will wither away.  There will be no money, no greed, no deprivation, and, therefore, no crime.

However, since a society can't directly leap from capitalism into communism, Marx reasoned that a dictatorial socialist state would be a necessary transition in order to develop the required material base, help to spread the revolution around the world, and to condition the people's minds by uprooting greed and selfishness (or to eliminate those individuals who can't be conditioned).

Leaving the debunking of utopian follies for another time, let's just say that the totalitarian socialist state is where they always get bogged down.  Despite their ideal of a stateless future, the leftists invariably become ruthless and uncompromising statists.  It no longer matters whether it's a doctrinaire Marxist socialism or "corporate" fascism; if the end result is evil, original intentions don't count.

In Russia, the communists used to demonize their opponents long before the Revolution, which made it easier for them to physically eliminate the opposition later.  As soon as they were in full control of the government, they began to demonize entire segments of the society, subcultures, and classes of people whom they deemed incapable of change.

Observe a visual example of communist demonization: an agitprop poster titled "Enemies of the 5-Year Plan," more broadly interpreted as "enemies of socialism" and, by extension, "enemies of the people." 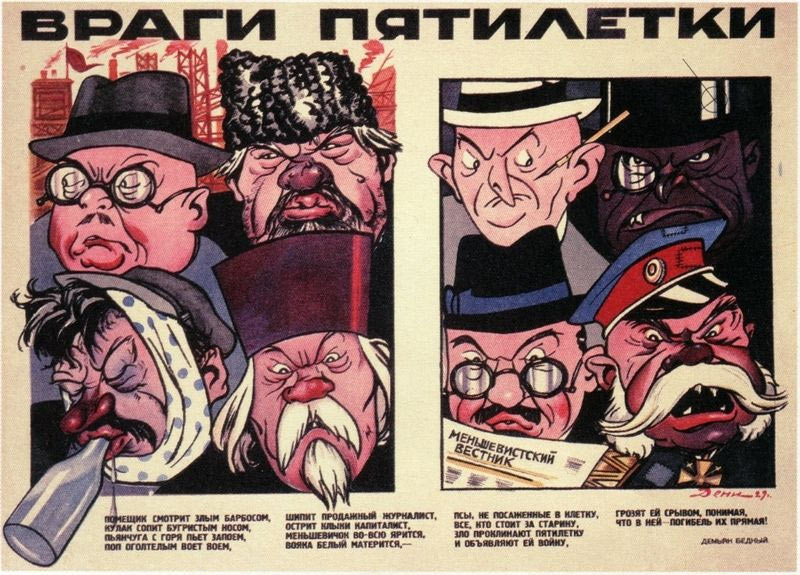 A disparaging verse at the bottom describes who the enemies are:

The wealthy landowner
The kulak (a pejorative term for a wealthy farmer who "exploits" hired labor)
The drunk
The clergy (a Russian Orthodox Priest)
The bourgeois press (a non-compliant, independent journalist)
The capitalist (a banker, industrialist, merchant)
The Menshevik (a political opponent from a different communist faction)
The surviving remnants of the pre-revolutionary law enforcement and the military

The wealthy farmers, being the most numerous group and the most likely to resist the collectivization of agriculture, were subjected to the most vicious dehumanization reminiscent of the anti-Semitic propaganda in Nazi Germany.

Note this Lenin quote on another dehumanizing poster: "The kulaks are the most bestial, brutal and savage exploiters, who in the history of other countries have time and again restored the power of the landlords, tsars, priests and capitalists." (Full quote in Russian)

The demonization of the kulaks laid the groundwork for their subsequent annihilation.  Facing a peasant rebellion, Lenin sent the following telegram to his henchmen: "Hang publicly (in full view of the people) no fewer than one hundred known kulaks, rich men, bloodsuckers.  Make their names public.  Take away all their grain.  Make a list of the next group of hostages.  Do it in such a fashion that for hundreds of miles around the people might see, tremble, realize, and scream: 'they are strangling, and will strangle to death, the bloodsucking kulaks'."

Other non-compliant citizens were dealt with in a similar fashion.  "Statements from the few survivors, published in émigré newspapers the following year, describe Sevastopol, one of the towns that suffered most heavily under the repressions, as 'the city of the hanged.' 'From Nakhimovsky, all one could see was the hanging bodies of officers, soldiers, and civilians arrested in the streets.  The town was dead, and the only people left alive were hiding in lofts or basements.  All the walls, shop fronts, and telegraph poles were covered with posters calling for 'Death to the traitors.' They were hanging people for fun." -- The Black Book of Communism: Crimes, Terror, Repression by Stephane Courtois et al, pg 107

These were not aberrations, but logical consequences of the Marxist theory.  According to Karl Marx, "there is only one way to shorten and ease the convulsions of the old society and the bloody birth pangs of the new -- revolutionary terror."

Oleg Atbashian, a writer and graphic artist from the former USSR, is the author of Shakedown Socialism, of which David Horowitz said, "I hope everyone reads this book."  In 1994 he moved to the U.S. with the hope of living in a country ruled by reason and common sense, appreciative of its freedoms and prosperity.  To his dismay, he discovered a nation deeply infected by the leftist disease of "progressivism" that was arresting true societal progress.  American movies, TV, and news media reminded him of his former occupation as a visual propaganda artist for the Communist Party -- a job he reluctantly held, as he knew that no intelligent person would take such art-by-numbers agitprop seriously.  Oleg is the creator of a satirical website ThePeoplesCube.com, which Rush Limbaugh described on his show as "a Stalinist version of The Onion."  His graphic work frequently appears in the American Thinker.