Warning: mysqli_free_result() expects parameter 1 to be mysqli_result, bool given in /var/www/html/americanthinker/admin/common/functions/func.general.php on line 126
 Pravda, Guns, and America - American Thinker
|

Has Pravda gone anti-Communist, as many of its opinion pieces suggest?

First, let's just say that the hard-copy version is not the same as its digital namesake.  The original newspaper had been started by Lenin in 1912 and shut down by Yeltsin in 1991.  It was later restarted; it changed several owners, including some foreign millionaires, and in 1997  became the official organ of the Communist Party of the Russian Federation.

At some point during these troubled times, the online edition split from the paper version and left to seek its own destiny.  It is now shamelessly whoring for internet traffic around the world, in an effort to maximize advertising revenues.

Even a cursory glance at the English and Russian digital editions (they have different content, tailored to their respective audiences) reveals a radically apolitical tabloid with a wild mix of real news, conspiracy theories, hoaxes, and contradictory opinions, topped with headlines whose main function is to attract search engine traffic.  The other two foreign-language versions -- Portuguese and Italian -- probably follow the same pattern.

To use the Marxist vernacular of the erstwhile Party Organ, its glorious ideological monogamy has all but withered away, to be replaced by the historically inevitable capitalist promiscuity.

While the old Pravda's homogenized, truth-free purism made it  a respectable but neutered organ with the word "truth" in its title, the new "hands-off" approach allows sporadic diamonds of actual truth to shine through the dirt -- a mind-boggling change from what I remember reading on its pages when I still lived in the USSR.

Pravda to Americans: 'Never give up your guns!'

The best example of that change is an opinion piece by Stanislav Mishin, reprinted by Pravda from his blog, in which the author earnestly advises Americans to "Never Give Up Your Guns."

Putting aside vague nods at sinister conspiracies by Wall Street and international bankers -- which, like flies in the ointment, defile this author's writings -- Mishin's article offers a compelling historical lesson.

Below is a compressed, edited, and "de-flied" version of the Pravda article:

This will probably come as a total shock to most of my Western readers, but at one point, Russia was one of the most heavily armed societies on earth.  This was, of course, when we were free under the Tsar.  Weapons -- from swords and spears to pistols, rifles, and shotguns -- were common items.  People carried them concealed or holstered.  Daggers were a prominent part of many traditional attires.

Various armies -- the Poles, Napoleon, or the Germans -- found out that holding Russian lands was much harder than invading them, as every occupier faced a well-armed and aggressive population, hell-bent on driving out the aggressor.

This well-armed population was what allowed the various groups to rise up in 1918 and wage a brutal civil war against the Red Army.  Disorganized politically and militarily, many factions of the White Army were mostly armed peasants, villagers, farmers and merchants, protecting their own property.

When the Reds approached Moscow, the city was a home to over 30,000 active and retired military officers, all with their own issued weapons and ammunition, plus tens of thousands of armed citizens.  The Communists promised to leave them alone if there would be no armed resistance.  The Muscovites believed them and didn't intervene when a few hundred White military cadets and their instructors died defending the city against ten thousand Reds.  Shortly afterwards, the Communists asked everyone to register their weapons.  Those who showed up, where promptly shot.

Once they won the civil war, the Reds disarmed the entire population.  From that point on, mass repression, mass arrests, mass deportations, mass murder, and mass famine were a safe game.  The worst the Communists had to fear was a pitchfork in the guts, a knife in the back, or the occasional hunting rifle.

For those of us fighting for our traditional rights, the US 2nd Amendment is a rare source of light in the ever darkening world.

If politicians really believe that our society is full of incompetent adolescents who can't be trusted with weapons, let them explain why we should trust them or the police, who also come from the same society and grew up in this culture.

While various governments try to limit gun ownership so as to protect the people from lunatics and criminals, what they really protect is their own power.  Everywhere the guns are banned, gun-related crime increases.  If lunatics want to kill, they can use cars (NYC, Chapel Hill NC), swords (Japan), knives (China), or home-made bombs (world over).  They can throw acid (Pakistan, UK), or fire bombs (France).  Often times the only way to stop a raging maniac on a killing spree is a bullet to the head fired by an armed citizen.

Do not fall for their false promises.  Do not extinguish the last remaining light that allows humanity a measure of self-respect.

Father of Soviet Political Poster who worked for the Nazis

Let me illustrate the above with this Soviet propaganda poster, published in 1918 in Moscow, during the described events: "Citizens, hand over your weapons!" 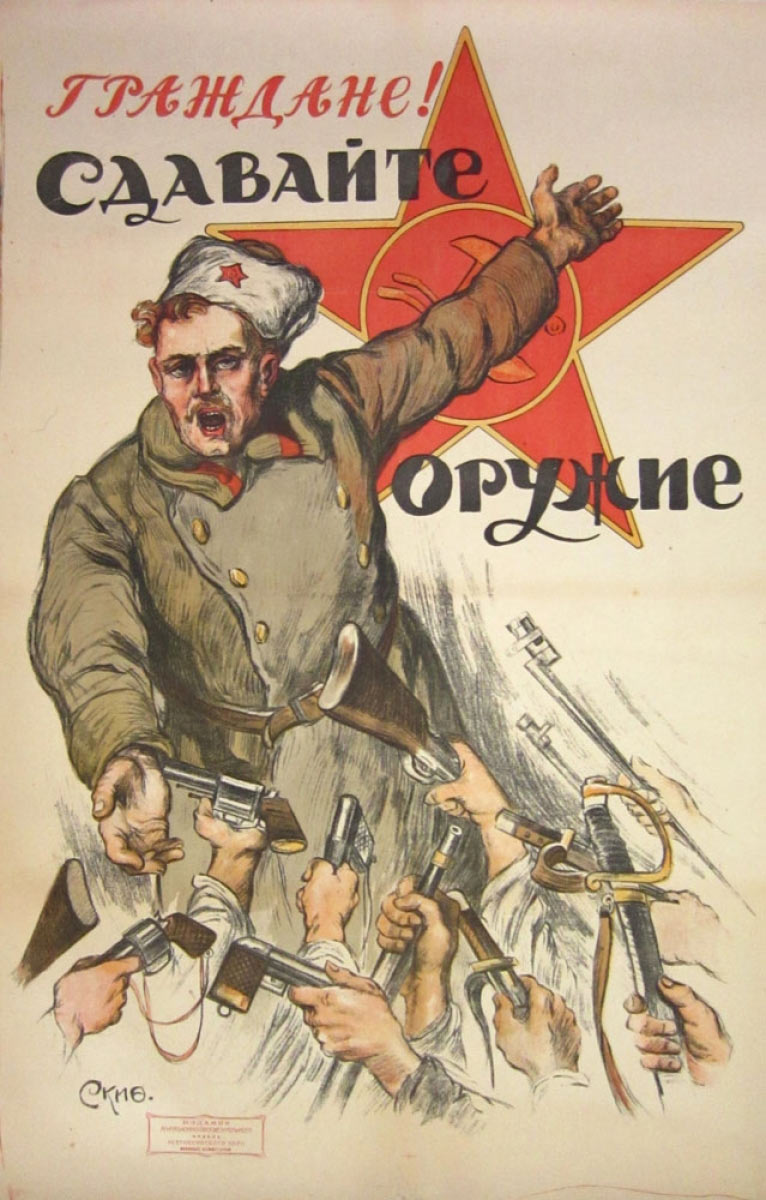 Curiously enough, the artist, Alexander Apsit, who is rightfully considered the father of the Soviet political poster, later escaped the communist system for which he advocated with his prolific propagandistic imagery.  Shortly after the civil war, he settled in his native Latvia, leaving behind  the "workers' paradise" where many of his colleagues were being harassed, jailed, and murdered.

In yet another ironic twist, after Latvia's annexation by the Nazis in 1939, the father of the Soviet political poster moved to Germany and worked for the Nazis until his death in 1943, in the middle of his adopted country's war against the Soviet Union.

This story would be incomplete without a quote from the former Pravda editor and prominent Party theoretician Nikolai Bukharin: "We asked for freedom of the press, thought, and civil liberties in the past because we were in the opposition and needed these liberties to conquer.  Now that we have conquered, there is no longer any need for such civil liberties."  In a strike of poetic justice, in 1937, Bukharin was declared an enemy of the people and, after a show trial, executed on bogus charges.

Back in 1918, in the times of Lenin's Red Terror, head of the Communist International Grigory Zinoviev issued this pronouncement: "To overcome our enemies we must have our own socialist militarism.  We must carry along with us 90 million out of the 100 million of Soviet Russia's population.  As for the rest, we have nothing to say to them.  They must be annihilated."  Quite ironically, Zinoviev himself was later purged and executed in 1936.

Unlike his followers, the father of Communism, Karl Marx, was lucky to die peacefully in his bed -- but not before he wrote: "There is only one way to shorten and ease the convulsions of the old society and the bloody birth pangs of the new -- revolutionary terror."

Perhaps the most ironic historical mind-bender of all is found in the United States, where history was much kinder to communist rebels.  In the 1960s, the leader of the KGB-supported communist terrorist group Weather Underground, Bill Ayers, repeated Zinoviev's idea of annihilating ten percent of the population -- 25 million Americans -- so as to advance the revolution in the United States.

Ayers summed up the ideology of his movement as follows: "Kill all the rich people.   Break up their cars and apartments.   Bring the revolution home, kill your parents."  Unlike his Soviet role models, however, this communist didn't have to leave the country or suffer any discomfort.  Supported by the left-dominated academic establishment, Ayers became a prominent member of and later vice president for curriculum studies at the American Educational Research Association (AERA), exerting great influence over what is taught in America's teacher-training colleges and, through indoctrination of a generation of teachers, its public schools.

According to this must-read article by Daren Jonescu, Ayers simply altered his strategy, replacing annihilation with re-education -- or, rather, pre-education, thus reducing the number of potential targets.  Since then, "the educational establishment has progressed so far that the KGB-supported communist revolutionaries, who received training and funds from Cuba's DGI, have been welcomed, first as honored guests (in lieu of a prison sentence), and finally as leading members of the establishment."

For many years now, the "imperialist" America was being quietly transformed, under our noses, into a socialist country through mind conditioning of at least three complete K-12 generations of public-school students.  USSR is dead; long live the USSA.

And you thought Pravda turning anti-communist was a big deal!

Oleg Atbashian, a writer and graphic artist from the former USSR, is the author of Shakedown Socialism, of which David Horowitz said, "I hope everyone reads this book."  In 1994 he moved to the U.S. with the hope of living in a country ruled by reason and common sense, appreciative of its freedoms and prosperity.  To his dismay, he discovered a nation deeply infected by the leftist disease of "progressivism" that was arresting true societal progress.  American movies, TV, and news media reminded him of his former occupation as a visual propaganda artist for the Communist Party -- a job he reluctantly held, as he knew that no intelligent person would take such art-by-numbers agitprop seriously.  Oleg is the creator of a satirical website ThePeoplesCube.com, which Rush Limbaugh described on his show as "a Stalinist version of The Onion."  His graphic work frequently appears in the American Thinker.
|