Warning: mysqli_free_result() expects parameter 1 to be mysqli_result, bool given in /var/www/html/americanthinker/admin/common/functions/func.general.php on line 126
 Dueling Documentaries: FrackNation gives the counter-argument to the anti-fracking Gasland - American Thinker
|

Dueling Documentaries: FrackNation gives the counter-argument to the anti-fracking Gasland

FrackNation is an independent documentary that recently premiered in New York City's Chelsea Clearview Cinema.  The film will be shown on Mark Cuban's cable station AXS.TV on January 22 at 9 p.m. Eastern.  Since accusations fly freely on both sides of the fracking issue ("the fracking war" might be a more appropriate phrase here), and billions of dollars -- literally -- are being contested around the world, the producers decided the best way to fund the film would be by using the website Kickstarter.com to aggregate small donations -- and also not take any money from energy industry executives.

In less than 30 days, controversial filmmakers Ann McElhinney and Phelim McAleer have raised $150,000 from more than 2,000 backers for their documentary, FrackNation.  Since the launch of the crowdfunding campaign on February 6, the outpouring of support for the film has earned it a top spot on Kickstarter's "most popular" list and helped FrackNation reach its $150,000 fundraising goal in half the estimated time.

Controversial filmmakers, they say?  If a documentary isn't "controversial" -- i.e., does not have a strong point of view -- it is, in fact, boring.  The fact of the matter is that any documentary filmmaker -- of any political persuasion - who challenges conventional thought is going to tick off someone who has a differing viewpoint.

To continue with the controversies, here is my personal full disclosure.  Besides attending the premiere, I am one of the small investors in FrackNation and am listed in the on-screen credits as an "Executive Producer," under the name "Jack E. Kemp," because of my whopping $20 contribution.  That dollar figure is not a typo.  By the way, Carol Collier, the federal EPA's executive director of the Delaware River Basin Commission, has an on-screen credit in the movie Gasland.  She claims that her name was used without her permission -- and, at this point, I'm inclined to believe her. 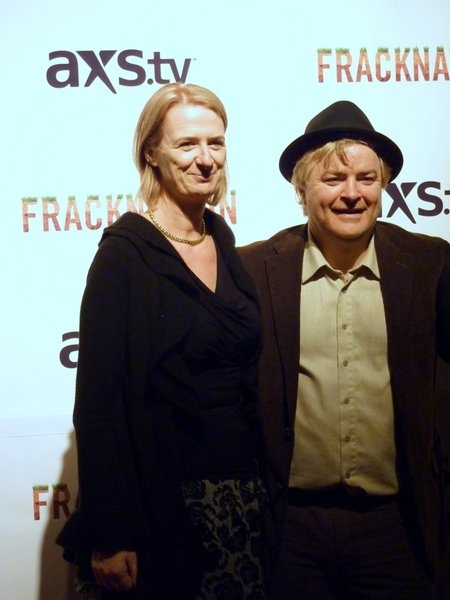 Immediately after the premiere showing, there was a question-and-answer session with producers Phelim McAleer, Ann McElhinney, and Magda Segieda, with Robert Bryce of the Manhattan Institute as moderator.  One person immediately rose to say that the producers had no legal right to show fracking opponent (and Gasland director) Josh Fox and that there would be legal repercussions.  FrackNation producer and narrator Phelim McAleer replied that the law allows for something called Fair Use (of limited segments from a film or article).

Later in the Q&A, a woman sitting directly in front of me said in heartfelt tones that she had gone to small-town northeast Pennsylvania and talked to people who said they were harmed by fracking.  She gave no names and produced no film evidence of anyone even standing near land in the county.

FrackNation itself begins by discussing the role that fracked oil could play in making America energy-independent by 2020.  Robert Bryce of the Manhattan Institute (also the author of Power Hungry: The Myths of Green Energy and the Fuels of the Future) makes an appearance both near the beginning and later in the film to briefly discuss the limits of wind and solar power.  He is shortly followed by the signature scare scene from the Gasland documentary: a sink's water flow -- mixed with natural methane -- lighted on fire.  This very dramatic image led to bans on fracking in Pennsylvania and New York State.  In a region of Susquehanna County, PA, which had 1,200 farms in 1950 and only 70 farms in 2012, this shutdown and loss of fracking subsidies to farmers has led to economic losses that one farmer describes in the film as "three years of pure hell."

Early in the film, Phelim McAleer travels to Chicago to question Gasland director Josh Fox at a public discussion.  Phelim mentions water being able to catch fire in Pennsylvania in 1976, long before fracking came to the state.  Incredibly, Josh Fox himself says there was an instance of water lighting on fire in 1936 (before fracking was invented) in the area.  We now have one of the central differences of thought and opinion between the pro- and anti-fracking people in this film.

Both sides agree that there was methane in the water in Pennsylvania before fracking ever occurred, but Josh Fox wants to leave you with the visual image of a flaming tap.  If you want to think that fracking in the region caused this problem, well, Josh won't contradict you, because that helps his cause.  Then there is the opposing view by Phelim McAleer -- namely, that this event, even if authentic, would have been caused by naturally occurring methane in the area's water -- which goes back at least to the time George Washington himself set fire to a nearby New Jersey river.  This naturally occurring methane hasn't killed off the local farmers or their cows (shown in the film).  The state inspects the water and allows dairy farmers in the area to sell their milk without any fear of health concerns.

Further exposing the anti-fracking crowd's appeal to fear, FrackNation's trailer shows one local opponent of fracking, Mr. Sautner, claiming that his water contains "weapons-grade uranium."  Sautner produces no scientific report to back this claim up, nor does he have a Geiger counter for what I now have to call a theatrical claim.  On camera, he states that the reports of both the state EPA and the federal EPA are false.

Defiantly showing a jar of brown brackish water, this man and his wife later declined to give a fresh-water sample to either Phelim McAleer or anyone else; he states that on some days, the water runs clear out of his tap.  Of course, clear tap water can contain toxins, heavy metals, or small radioactive particles that a scientific lab can quantify -- so what is Sautner afraid of?  Only small children believe that clear water is proof of cleanliness. 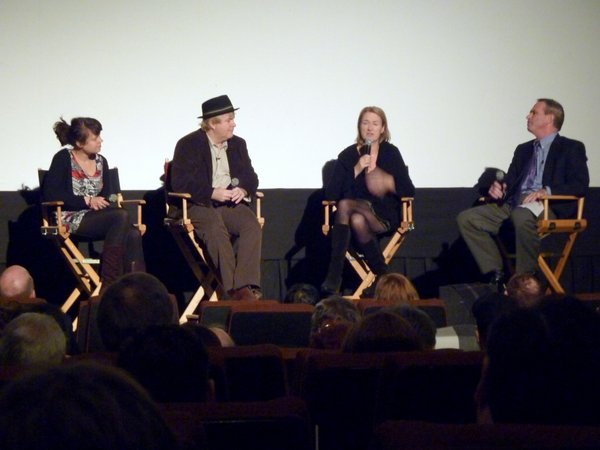 Why didn't Mr. Sautner make a video of some reputable lab scientists collecting his clear-flowing tap water and taking it to a laboratory while accompanied by a local judge or mayor?  Apparently this disgruntled resident doesn't want to take the risk that nothing harmful will be found.  And he knows enough about theater to understand that the appearance of clear tap water in a movie will be proof enough for many a "low information voter" to abandon his side in this cause.  He needs the theatrical argument based solely on surface, cosmetic appearances gotten from holding up a jar of brackish water to persuade his "scientifically trained" supporters such as Matt Damon, Mark Ruffalo, and Yoko Ono, who put up a billboard in the Bronx saying "Governor Cuomo: Imagine there's no fracking."

When Phelim McAleer posted the short confrontation with Josh Fox in Chicago on YouTube and tried to post it on Vimeo, McAleer found that Josh Fox was able to have this visual exchange blocked from both locations on the internet.  They both would later be allowed back on the two video services, but at that time, McAleer's curiosity was piqued, and he decided to make a documentary about the people that Josh Fox said were living in a "wasteland" in Susquehanna County, PA.  (You could say that he got his Irish up.)  In fact, Josh Fox, the self-appointed neighbor and spokesman for the people of Northeast Pennsylvania, doesn't have title to the land he claims a gas company offered him over $100,000 to use for fracking.

McAleer said during the Q&A that the title to the land is in Fox's grandfather's name.  Josh Fox became known "[a]s the Founder and Artistic Director of International WOW Company," where "Fox has established himself as a significant force [in] New York theatre."  Josh Fox is more of a New York environmental activist, and he basically plays a Pennsylvanian at rallies.

Another problem the environmentalists have objected to, and which I believe is mentioned in Gasland, is the Federal 2005 Energy Bill with its so called "Halliburton Loophole."  Public Citizen said this about the bill (and now law):

"Exempts from the Safe Drinking Water Act a coalbed methane drilling technique called "hydraulic fracturing," a potential polluter of underground drinking water. One of the largest companies employing this technique is Halliburton, for which Vice President Richard Cheney acted as chief executive officer in the 1990s.

Notice the term "potential polluter."  It is a weasel word followed by a scare word.  I am potentially the next president and Olympic 100-meter gold medal champ, etc.  FrackNation states that Senator Barack Obama voted for this legislation.

In one section of the FrackNation, Phelim McAleer goes to Poland to show what a country with oil shale not yet developed looks like when the country instead has to import all of its gas from Russia.  The film shows an old female pensioner living on 800 zlotys a month, with a gas bill of 377 zlotys and an electric bill of 266 zlotys.  She is selling off her valuables slowly and painfully to make ends meet.  It is a more extreme version of the Pennsylvania farmers' situation; in the Polish case, endless importation of oil and gas makes for a sentence of poverty.

I'll conclude with Phelim McAleer's filmed meeting with a real scientist who would know how to test for "weapons-grade uranium" or most anything else.  He is Dr. Bruce Ames, "Senior Scientist at Childrens Hospital Oakland Research Institute (CHORI), director of their Nutrition & Metabolism Center, and a Professor Emeritus of Biochemistry and Molecular Biology, University of California, Berkeley."  When asked about all the chemicals used in fracking and the fear they produce in the public, Dr. Ames said that cabbage has chemicals with long names that "sound scary."  The good doctor also stated that coffee has 500 chemicals used in processing whose names are also scary.  The "threat" is distorted by what scientists call High Dosage Artifact (think of something like five lifetimes' worth of an extracted chemical consumed in one day during testing), a logical fallacy that the environmentalists love to use to scare people.

I don't think  Phelim McAleer fooled Dr. Ames into being in his (and his co-producers') pro-fracking film.  And the 84-year-old Dr. Ames has most probably heard every scientific argument, both good and bad, throughout his career.

Recently, the media received copies of secret report that New York State had hid for almost a year that says fracking is safe, if available industrial safeguards to water are used.  A copy of this report has been given to the New York Times, and the paper has published sections of it.  I wonder if Matt Damon, Yoko Ono, and Mark Ruffalo will now say they know that the The New York Times was "duped."