Many Republicans seem ready to agree to Obama's demands for tax increases -- after all, elections have consequences, and he won, right?

Maybe, but before agreeing to anything, the GOP should probably look a little more carefully at just who elected Obama. 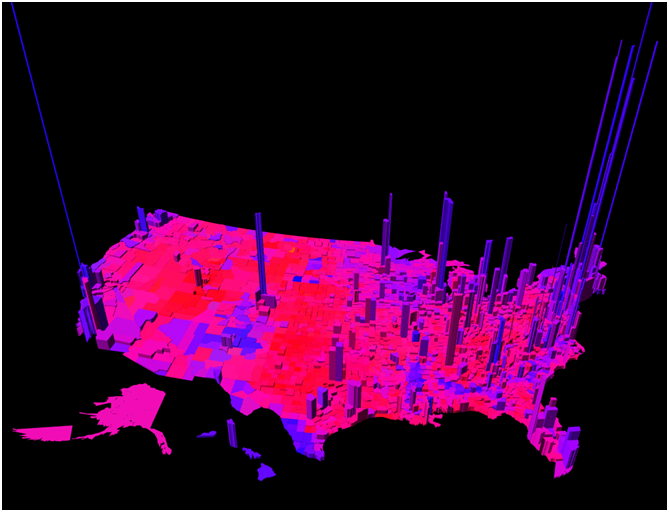 Dr. Robert Vanderbei, a professor of Operations Research at Princeton, developed the visualization shown above by combining Democrat blue with GOP red according to popular vote proportions taken at the county level and printing the result as a 3D map in which apparent vertical height is a stand-in for the number of voters counted.

Across the country, Obama won by large margins in a relatively small number of counties -- and, within those counties, by overwhelming majorities in some, but usually not all, precincts.  More than 40% of Obama's California margin came, for example, from about 90% of the precincts in Los Angeles County alone.

This effect is clearer in states like Ohio, where Obama's 150,891 overall vote margin came mainly from the 256,581-vote surplus he amassed in just 900 Cuyahoga county precincts.  Similarly, he counted 588,781 votes to beat Romney by nearly five to one in Philadelphia County, but he won Pennsylvania by a net of only 309,115 votes.

What's going on is that big numbers from a relative handful of precincts can swing statewide totals to democratic presidential and senatorial candidates despite widespread popular support for GOP policies in congressional and other district races.  Overall, Romney won about two thirds of the county-level contests in the country, but he lost state wide counts to high turnouts and virtual unanimity in precincts where decades of redistricting have combined with the Democrat tendency toward self-ghettoization to create conservative no-go zones.

The highest turnouts occurred in the poorest areas, but poverty is not the unifying characteristic of those counties or precincts voting heavily for Obama -- class is.  Overall, eight out of the top ten richest counties (based on average per capita income) in the country seem to have voted for Obama -- with almost all of the actual votes involved coming from precincts home to mid- to lower-level government workers and service industry personnel catering to the rich.

One way of looking at this is as the fruition of the socialist dream: with Obama's money mostly coming from the very rich and his supposed mandate to raise taxes on the middle and working classes coming mainly from those dependent on government support, what we're seeing is arguably the kind of forced socio-economic leveling Robin Hood's fans have always dreamt of.

Another, perhaps somewhat more obvious way of looking at this is to say the GOP represents the American taxpayer and thus has a very clear mandate not only not to compromise with Obama, but also to fight him every step of the way.

These views are both right and wrong.  They're right in the sense that the GOP has a clear mandate to fight, and right in that Obama's media and academic supporters do generally think they're fighting the good fight to right social ills and bring justice forward -- but wrong about why the GOP should fight, and wrong to write off a lot of the people whose votes the Democrats count as always theirs.

The Democrat divide-and-conquer strategy that seems to have won this election for Obama writes off millions of Americans as hopeless dependents whose lack of education and opportunity not only places them beyond the operation of law and decency, but empowers their betters to decide for them.

Those Somali refugees bussed to polling places in Ohio were there not because they believe in Obama; they were there because Democrat militants brought them to count as voting for Obama.  You beat Romney/Ryan by 1,032 to 12 in a precinct that may have more registered voters than residents not because the people there believe that Romney is the anti-Christ; you get that from social discipline and an end-justifying-the-means attitude among people who know they can always invoke racism to blunt any real attempt at auditing their results.

The American view is the opposite view: that the worst barrio kid -- the macho strutter with prison scars and a long record, no education, few language skills, and no positive role models -- is still human, still subject to the American dream.  He may express it by selling violence or crack cocaine instead of an iPhone app, but if you could magic away the social strictures governing his actions, you'd find that he wants what we all want: family, responsibility, and a white picket fence of his own.

Thus, the GOP's real mandate to fight Obama is based not on the selfishness of money, but rather on the moral obligation to protect millions of other Americans from the consequences of the left-wing idealist's naïveté -- because the socialist's agenda, when implemented, ultimately disenfranchises nearly everyone, producing the enormous social disparities of feudal states like Europe in the time of King George...or like North Korea, Cuba, and Communist China now, in which a few families of the über-rich have life-and-death power over huge subject populations.

The bottom line, then, for those Republicans who think the election result mandates reaching some kind of accommodation with Obama and Reid is that Democrats' winning margin seems to have come from society's extremal winners and losers -- from Warren Buffett and the Obamaphone lady -- not from those still in the fight for human dignity and human rights, not from the middle classes, and not from the working poor.  Basically, the reality of this election is that Romney/Ryan won an overwhelming majority among those who pursue the American dream -- and those people need representation, not compromise.