Warning: mysqli_free_result() expects parameter 1 to be mysqli_result, bool given in /var/www/html/americanthinker/admin/common/functions/func.general.php on line 126
 The Fiscal Cliff Diversion - American Thinker
|

The US economy is already over the fiscal cliff and falling at an increasing rate.  Today's economic questions should be focused on its rate of descent; will the rate increase or can it be arrested before the rocks below are reached.  After the election the economy has continued to implode, yet its downward plunge has been largely ignored by the mainstream media (MSM).  Apparently the MSM's economic orthodoxy is now only centered on fiscal cliff narratives.  The MSM's focus on the cliff gives Obama, their hero, economic cover since the cliff story is the economic story and not the terrible economic results occurring weekly and monthly.

Currently it is difficult to find economic data related to the past two months (or past three years)which is positive; whether it is meaningful growth in employment, an increase in the labor participation rate, a consistent uptick in GDP, a reduction in the workforce dropout rate, a reduction in government spending or a reduction in the deficit et. al.

Many fiscal cliff narratives have incessantly talked about tax increases/decreases, spending, debt, deficits and the intransigence of the President or the Republicans (mainly Republicans) to compromise.  With compromise a deal to move the country forward on important economic issues can be attained.  Certainly future economic performance will be significantly affected by many of the outcomes related to the cliff negotiations.  Yet the narratives seldom mention the Obama administration's past or current record on economic issues...a dismal report card that demonstrates no sustainable success on any level over the past four years.

A sampling of statistical evidence that the Obama economy is already in a free-fall includes: 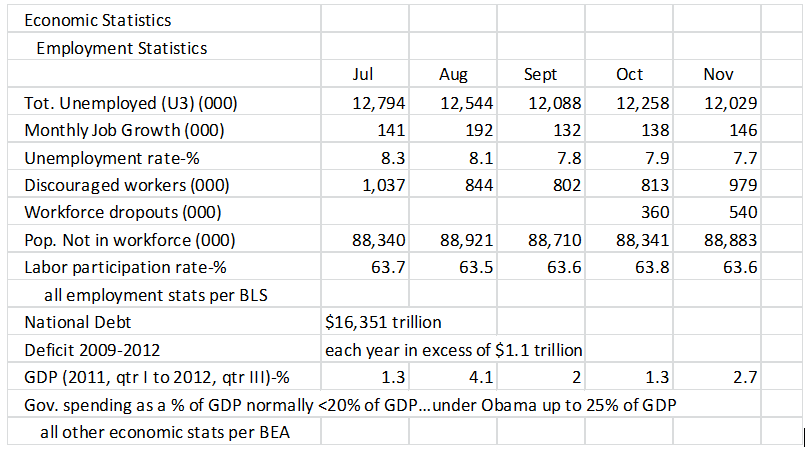 The above statistics when added to the fact that over 23 million Americans are unemployed, underemployed or discouraged, a 14.4% rate; that 47 million Americans are utilizing food stamps; that the number of citizens below the poverty line is increasing at an increasing rate; and that the unemployment rate has declined to 7.7% because the workforce dropout rate has exceeded 900 thousand workers in the last two months can be described as both tragic and scandalous.  This is the kind of information the MSM has largely ignored or chosen to soft pedal after the election.

Further, an explanation of government accounting practices such as baseline verses zero based budgeting has received little attention.  This silence leaves the average American believing that a cut in spending is a real reduction in outlays when it usually means only a decrease in the rate of growth in the spending.  Finally articles detailing the lack of a Federal budget and its consequences over the last four years have also disappeared from media coverage.

Instead the MSM has touted Obama's "fiscal cliff" position centered on $1.6 trillion in new taxes, $1.2 trillion in new spending, an added stimulus of at least $50 billion, taxing the already overtaxed evil rich, ignoring the realities of crushing debt, and dancing around nearly bankrupt entitlement programs.  In contrast the stingy Republicans want up to $3.0 trillion in guaranteed spending reductions, care taken to not gut the defense of the country, assured deficit and debt reduction, and modifications to entitlement programs to restrain their growth, cost and preserve their future...thereby insuring that the underprivileged are hurt (sarcasm intended).

Yet maybe the most telling informational deficiency is the shortage of reporting on the economic stimulative effects of previous income tax and capital gain tax reductions.  Reductions that then resulted in growing tax revenues and appreciable increases in prosperity for the American people.  In fact MSM stories have tried to debunk the realities of the Coolidge, JFK, Reagan, Clinton and Bush 43 tax reductions that kick started past sagging economies.  The media's reluctance to discuss tax cutting or the subsequent economic surges that followed their execution has largely removed these strategies from public debate.

The strategic use of tax policy to enhance economic activity and revenue growth began during the Coolidge administration.  President Coolidge and his Treasury Secretary, Andrew Mellon, passed three revenue acts, in 1924, 1926 and 1928 designed to spur economic growth and revenues after WWI.  Coolidge's and Mellon's rationales were that changes in marginal income tax rates would cause individuals (and companies) to change their behavior.  Taxpayers, they believed, would reduce taxable income by working less, reduce plans to expand businesses, restructure companies to avoid tax and even transfer some activities to the "underground economy" if taxes were high (and increasing) and exhibit the opposite behavior when taxes were reduced.  Studies of the effects of the three revenue acts demonstrated that revenue, economic activity and the share of taxes paid by the well-to-do soared.

Thirty-five years later President Kennedy presented the notion that marginal tax rate reductions would instigate increased economic activity in his 1963 State of the Union address (the act would be known as the Revenue Act of 1964).  He postulated a 20% across the board decrease in individual rates, modest declines in corporate rates and a minimum standard deduction to help a somewhat lackluster economy.  Kennedy's objectives were to increase consumption, up personal income and increase capital investments.

President Johnson signed the Revenue Act of 1964 into law in February of that year.  The legislation cut the top individual tax rate from 91% to 70%, lowered the corporate rate from 52% to 48%, and created a standard deduction of $300 + $100 exemption. The economic consequence of these actions was a reduction in the unemployment rate from 5.2% in 1964 to 3.8% in 1966, and material increases in both personal income and federal tax revenues in 1964 and 1965.

Thus Reagan introduced a broad-based plan, the Economic Recovery Tax Act of 1981, aimed at concurrently promoting economic growth through tax reductions coupled with expensing property using depreciation, incentives to increase savings and incentives to help small businesses.  The tax changes were phased in over three years.  The economic outcome was a dramatic turnaround over the next three years.  Capital gain tax revenues alone grew from $12.5 billion to $18.0 billion in 1983 and to an astonishing $80.0 billion by 1986.  In sum a moribund economic performance was transformed into one of vibrancy...featuring high growth, low unemployment, and low inflation and growing individual prosperity for a record number of Americans.  Revisionist critics (usually hardcore Keynesian economists) insist that the Reagan recovery's historical record is misleading and point to Reagan's deficit growth as a component of that truth...believing deficit spending created much of Reagan's economic success.

The merit of using marginal tax rates and capital gain tax reductions as an economic analgesic have been tested more recently by both Presidents Clinton and Bush.  Clinton, after the Republican Revolution's election victory, moved towards the political center and supported the Taxpayer Relief Act of 1997.  The act transformed the Clinton economy into a much stronger entity and produced much higher tax revenues by appreciably reducing capital gain taxes and by removing some of the negative effects of his earlier Omnibus Budget Reconciliation Act of 1993.

Finally the much maligned (read evil) Bush tax cuts bear mention.  In 2001 G.W. Bush using the pretested logic and the successful experience of the presidents noted above passed the Economic Growth and Tax Relief Reconciliation Act of 2001.  This legislation's purpose was to mitigate the recession inherited from Clinton and promote economic prosperity not seen since President Reagan.  Just as positive economic signs began to appear the World Trade Center disaster occurred.  Nevertheless once the tax reduction effects took hold over 50 consecutive months of strong economic activity were realized.  That activity abruptly ended due to the mortgage crisis and the following financial collapse.

Given the above realities, a fair hearing on an alternative approach for an economic resurgence using marginal tax rate reductions deserves discussion.  But sadly the MSM will continue to emphasize only statistics that highlight the positives of the torpid Obama economy (as will Obama) and continue to anesthetize the public to the magnitude of this administration's failed economic policies rather than report on or discuss a time tested tax strategy.  The truth is that the economy is already over the fiscal cliff.  Obama's incompetence did the pushing and his fiscal cliff strategy will accelerate the economy to destruction on the fast approaching rocks below.