Briefly, former dentist Dr. King Schultz (Christoph Waltz), recently turned lucrative pre-Civil War bounty hunter, buys the freedom of slave, Django (Jamie Foxx), training him in finding, hunting and killing the wanted villains he has been hired to bring to heel. The intent is to deputize Django, an expert marksman, as his aide de camp bounty hunter. Schultz is instead soon led to the site of Django's enslaved wife (Kerry Washington) who is living under the ruthless domination of Calvin Candie, a high-living Machiavellian plantation owner. 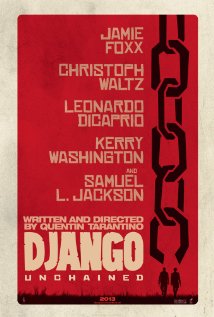 Quentin Tarantino's Django Unchained is a Weinstein avatar. It features the requisite sloppy buckets of scenic splatter, sometimes multiple draughts from the same "fire wall," a dead body that serves as a guardway against a rifle, and 30-06 barrage for the protagonist, Django "Freeman," plus the dispatch of every white person to appear on screen for longer than a cigarette draw, excessive evidences of modern-day sensibility back-retro'ed into 1848 ("two years before the Civil War," we are legended pompously), a tapestry of evil over-depiction of the ills and debaucheries of the slave period. The PC Weinsteins and zealous bloodlusty Tarantino miss not a trick for the audience, amused and titillated by the winsome Christopher Waltz (the very same from the film this most resembles, Inglourious Basterds, for its untruthfulness).

We are, again, under a different director, being toasted over an Oliver Stone goblet of faux history. History as rewritten by nihilist jokers with an agenda. No gang of do-gooders rode in "to kill nazzies," as Brad Pitt drawls in Basterds, just as no Django vision of justice and retribution rode the South astride a palomino, toting a Remington, with a perplexingly adorable German dentist-cum-bounty hunter.) Sensitive viewers are equally revolted by the excesses of polite rich company, represented by the arrogant-effete plantationer Leo DiCaprio and the noblesse not obliged Don Johnson as Big Daddy.

Samuel Jackson, his skin darkened at least three degrees, as a snowy-haired, wizened major domo slave retainer, is outstanding, as is the crusty Bruce Dern, and the kaleidoscopic Christoph Waltz. There is a funny if anachronistic scene where precursors to the KKK ride out to the range in homemade bags with eyeholes that do not fit the 30 men bent on burning out our heroes. Funny. But again, no crowning posse of evil-wishers threw down their wife-crafted hoods because their eye-holes didn't fit and they could see nothing as they galumphed along to rid the South of an uppity black "valet" and his mystifyingly gentlemanly dentist protector, played by the perfect-pitch Waltz.

At 2 hours 45 minutes, it does not bore. Does it entertain? Sure does. But it cannot be said to elevate. The movie is full of colorful language more common to today's ghetto and hip-hop palaces, but never mind. No one spent a long fortnight researching curse words of the mid-19th century. In the face of endless incantations of the sour [Negro] word, the audience endures endless violent lard, along with the half-grunt inarticulateness of Caucasian ranch hands who are barely above the Pleistocene for primitivism.

Django, the freed slave who helps his mentor kill the wanted criminals of the Southern veldt, is quickly svelte and super-civilized -- reading, and speaking, and tipping his felted hat to those that need be appeased before they are shot in a lightning splatter. Did slaves shed their tempi and timorousness in a few days?

No baddie escapes. No goodie gets an untimely end (except one). However cleverly scripted, nodding to our contemporary sensibilities -- an easy grab, no big adherence to the truth of 150 years ago in language and mores -- this is an orgiastic spill of negativity and white self-loathing.

The acting of all concerned is as spectacular as the vision is consistently, reliably gory. Tarantino does not spare the pyrotechnics and the multiple-massacre scene staple. Blacks will feel an atavistic delight at the earned retribution. Whites will feel the guilt and disturbance of we-told-you-so rue. As in the current Lincoln, also untrue in the main, the blacks are all good; the whites, save for Christoph's bounty-hunter/savior, are all bad.

Not a good movie for the start of another fairly difficult presidential tenure.  It's a too-easy grab at convulsive payback. It celebrates the uglier parts of our inner equilibrium. We know we are being manipulated to love that guy, hate this guy, delight in the suffering and well-deserved comeuppance of the hero. We're supposed to cheer for the wrenching murder of ourselves. It's worse than Avatar.

Unlike most screenings, this one ended with dozens of the SRO critic-audience discussing the film outside in knots of 3 and 4 people for close to half an hour afterwards.