Warning: mysqli_free_result() expects parameter 1 to be mysqli_result, bool given in /var/www/html/americanthinker/admin/common/functions/func.general.php on line 126
 Can ObamaCare Be Stopped? - American Thinker
|

Can ObamaCare Be Stopped?

The presidential election of 2012 has guaranteed that ObamaCare will not be repealed anytime soon.  But most Americans still want to see the Affordable Care Act (ACA) overturned or severely curtailed.  What are our options going forward?

Speaker of the House John Boehner recently declared that "ObamaCare is the law of the land."  It remains to be seen whether this is merely recognition of the current political landscape or if he meant that the way to undo the ACA now depends on alternative maneuverings.

Boehner reveals his thinking in this recent piece in Politico:

I've long maintained there are three possible routes to repeal of ObamaCare: the courts, the presidential election, and our constitutional responsibility for oversight," Boehner wrote in a letter to House Republicans earlier this month.  "With two of them having come up short, the third and final of these becomes more important than ever.

Obama won the 2012 election, so there is no President Romney to sign ACA repeal legislation.  The American people have spoken, and this option is off the table, at least until 2017.

The courts have not yet produced any ObamaCare-killing rulings.  John Roberts's stupefying decision to uphold the individual mandate by calling it a tax ensured that ObamaCare would go forward.  Dozens of lawsuits are pending, and once the states and the regulated community understand how overreaching the ACA actually is, a flood of additional lawsuits will follow.

Recently, the Supreme Court vacated an order by the Fourth Circuit Court of Appeals and ordered the court to hear arguments offered by Liberty University on key provisions of the ACA, including the employer mandate (requiring employers with more than 50 full-time employees to provide health insurance or pay a fine) and the contraception mandate (requiring health care benefits to include abortifacients and birth control).  The Obama administration's people did not challenge this ruling, presumably because they anticipate a favorable determination by the liberal Fourth Circuit.  The three-judge panel likely to review the appeal comprises Democratic Party appointees.  If Liberty University loses this case, then it could appeal to the Supreme Court. 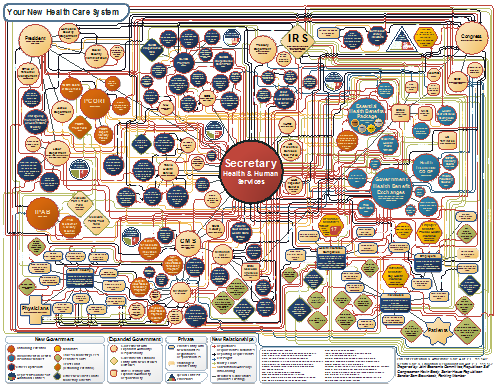 There are dozens of lawsuits opposing the contraception provision, based on freedom of religion principles.  Legal challenges to the health care exchanges, the individual and employer mandates, and technical provisions of ACA are active or under consideration by states, individuals, and companies.

One case challenges whether people can get subsidies for health insurance in states that don't run their own insurance exchanges.  Another puts forth a new legal argument against the constitutionality of the individual and employer mandates.  And the third argues that the law isn't valid because it originated in the Senate, and the Constitution says tax legislation needs to start in the House.

Can litigation stop ObamaCare?  It's possible, but not likely.  Major elements of the ACA, such as the birth control/abortifacient mandate, are likely to be modified or eliminated, and litigation against the insurance exchanges and Medicaid expansion could severely disrupt these schemes.

Congress has the duty to investigate the implementation of the ACA and resolve its problems, which are going to be many.  Congress can tie up the Department of Health and Human Services (HHS) with requests for information, subpoenas, hearings, and investigations.  Some believe that slow-walking the implementation of ObamaCare will allow it to collapse of its own weight -- in other words, its inefficiencies, contradictions, legal challenges, and lack of defined policies, procedures, and implementation strategies.  House Republicans could stymie the law by the oversight process and by restricting funding.  This is where John Boehner could do the most good.  But will he?

The Senate won't take up substantive reform legislation as long as Harry Reid is in charge, so it is up to the House to do what can be done.

Kathleen Sebelius, the HHS administrator, has admitted that there isn't enough money to set up the mandated health care exchanges and has gone back to Congress with a request for another billion dollars to get them rolling.  This money may not be forthcoming.

Some congressmen see a piecemeal approach to reforming the law, like rescinding parts that even Democrats will admit are bad, like the tax on medical devices, the IPAB, and the built-in punitive taxes on supplemental insurance plans.

The central implementing mechanisms for ObamaCare are the American Benefits Health Exchanges, and many states are refusing to set them up.  This means that the federal government will come into the states to set up and run them.

As of December 14, the deadline for making a decision, only 18 states and D.C. are pursuing their own health insurance exchanges.  Seven states are opting for a state/federal hybrid exchange, and 25 states have told the HHS that they will not set up exchanges.

One of the main objections to ObamaCare is that it will disrupt excellent health care coverage that is already enjoyed by the majority of Americans.  Those with good jobs will receive poorer and more expensive health care benefits as a result of the ACA.  Another objection is that ObamaCare exchanges will be very expensive, costing the states hundreds of millions of dollars to set up and many millions annually to operate.  No one knows how much ObamaCare will degrade health care or cost the states, especially after the initial implementing federal dollars dry up.

In a letter to HHS, Wisconsin Gov. Scott Walker said 90% of residents in his state already have insurance coverage without the help of an exchange.  Choosing a state option would subject residents to "a federal mandate lacking long-term guaranteed funding," he wrote.

The states will find more objections to ObamaCare as it is implemented over the next few years.  The pushback might prove sufficient to seriously impede the program. 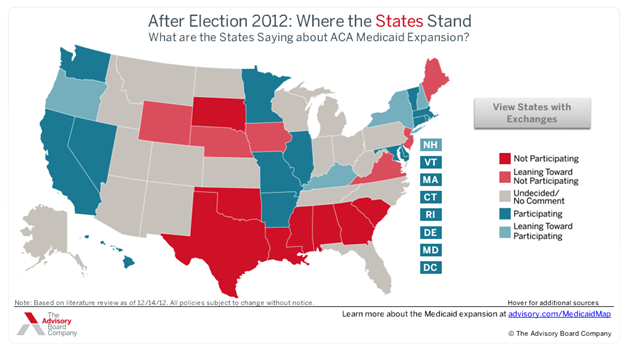 "I look at the states as the next critical battleground," said Robert Doherty, the American College of Physicians' senior vice president for governmental affairs and public policy.  If some states decline to extend Medicaid, the nation will end up with coverage like "Swiss cheese" with holes for "the poorest of the poor," he said.

The outcome of this is likely to be a hodgepodge of benefits across the nation, with poor people and illegal aliens flocking to states offering the best benefits under Medicaid.  Without additional revenues, state budget directors will be unable to find funding to pay for the Medicaid expansion program.  Once the initial federal funding stops, the states will have to pay far more than they are now bargaining for.  This will mean substantial increases in state taxes and fees to pay for the program.  The critical question that governors have to ask is: how are we going to pay for it?

ObamaCare is filled with hidden taxes, fees, and charges.  People usually respond to taxes by avoiding them.  The Obama health care taxes will cause businesses and individuals to seek creative ways to minimize tax exposure, resulting in reduced overall health care coverage.

ObamaCare may turn out to be the worst job-killing legislation ever produced by government.  According to the Wall Street Journal:

"Some low-wage employers are moving toward hiring part-time workers instead of full-time ones to mitigate the health-care overhaul's requirement that large companies provide health insurance for full-time workers or pay a fee.  Several restaurants, hotels and retailers have started or are preparing to limit schedules of hourly workers to below 30 hours a week."

The CBO has estimated that the law will reduce the labor use by about half a percent -- roughly 650,000 jobs.  The National Federation of Independent Businesses found that the individual mandate by itself could cost 1.6 million jobs.

ObamaCare will require new taxes, greater deficit spending, more debt, and more debt service expense.  ObamaCare will cause employers to spend more money to produce their goods and services, and those inflated costs will be passed directly on to all of us.

Obama has told America that the ACA will not provide benefits to illegal aliens.  Who believes this?  Expect a mass immigration of ailing foreigners eager to tap into America's new socialized medical system.  They, along with low-income Americans, will move to states that provide expanded Medicare benefits, and they will have a crushing impact on funds and programs available to indigenous welfare recipients.

As ObamaCare gets implemented, and its onerous provisions are pushed through the economy and our culture, we can expect all kinds of unforeseen and unintended consequences to arise.  Some will be very difficult to remedy or stop.  The effects could be damaging and long-lasting.

The Democratic Party forced ObamaCare on the American people, and we will struggle mightily in the coming years to deal with it.  There will be pain for everyone, except for members of Congress and government employees.  The ACA was passed on the promise that it would reduce health care costs and make health care available to more Americans.  ObamaCare will have the exact opposite effect.

Already, the cost of health care is skyrocketing.  The availability of care will become increasingly limited as the ACA is implemented, especially for our seniors.  Socialized medicine throughout the world has resulted in poorer health care and health care rationing.  Socialized medicine the world over suffers from exploding costs, bureaucratic waste, the inefficiencies of central planning, and poor policy and implementation.  This is the inevitable outcome of ObamaCare.

Can we stop ObamaCare?  Not likely.  Full or partial repeal might be possible in 2017, if we get a Republican president, but repealing a law that is doling out government benefits is extremely difficult.  When the American people rejected Romney and the Republicans, they guaranteed the implementation of ObamaCare.  Elections have consequences, and now we have to live with them.  The IRS will be watching to see that we do.

J.T. Hatter is the author of Lost in Zombieland: The Rise of President Zero, a political satire on the Obama administration. JT can be reached at jt@jthatter.com.