The wind power lobbyists say it creates jobs.  Well I have a better way to make jobs based on the same principles: let's train dogs to walk on treadmills to generate electricity.  Think of all the jobs for dog-trainers, dog food companies, and dog-walkers.  Think of all the jobs at dog retirement homes for dogs too old to work.  Think about all the do-gooders collecting a salary for looking out for the welfare of the dogs.  Think about the attorneys employed in filing class action suits against dog-exploiters.  Think about the jobs in organizations opposing the use of genetically modified dogs.  Dogs on treadmills are much better than windmills for creating jobs.

Okay, windmills are not absolutely useless.  If you have no alternative because you live 20 miles from the nearest power line, then feel free to get a windmill.  Don't forget the banks of storage batteries to keep your TV running when the wind isn't blowing.

Windmills don't work when the wind isn't blowing.  The wind power lobbyists don't emphasize that point.  There are very few places where the wind always blows, and, not surprisingly, hardly anybody lives near those mostly unpleasant places.

Somehow, the environmentalist love of windmills is seemingly without limit.  If you bother an eagle -- even pluck a feather from a dead eagle -- you are looking at hard time in the federal pen.  But if you operate wind turbines that kill eagles on an industrial scale, you don't have to worry.  Eagle-killing windmills are specifically exempted from liability.  Windmills trump our national symbol.  Just don't pick up the eagle feathers under the windmills.

Government programs that subsidize well-connected industries at the expense of everyone else are not new.  The Midwest is filled with ethanol manufacturing plants where a good part of the corn crop is turned into very expensive alcohol that is then burned up in cars, at the expense of those taxpayers who are not corn-farmers or owners of ethanol factories.  Like the wind power program, the ethanol program was originally justified on global warming grounds that later were shown to be phony.

That the original justification for a program turns out to be phony doesn't necessarily matter.  If you have enough citizens sucking at the federal teat, you can keep any program going, no matter how silly and useless.  Our federal government subsidizes rich people growing sugar beets and sugar cane even though sweet corn syrup can be produced at a cheap price that would be even cheaper if we weren't burning up a good portion of the corn crop.  Our federal government even subsidizes environmental groups to sue the federal government -- via the misnamed Equal Access to Justice Act.

Wind power is expensive and disruptive.  The expense is the capital cost of the windmills amortized over the electricity produced during the life of the windmill.  The unpredictable nature of wind disrupts the electrical grid, increasing the need for backup plants that have to be ready at a moment's notice to take over for becalmed windmills.  The more wind power you have, the more expensive and disruptive it becomes.  If you have just a little bit of wind power, the current situation in most places, the backup plants, or spinning reserve, that is normally on the grid can handle the disruption.  If you have a lot of wind power, then you have to build special backup plants -- some of which, at the margin, are almost always idle but still cost a lot of money.  If you have a little bit of wind power, you can exploit the best places that have wind, near power lines and near markets for the electricity.  If you want a lot of wind power, you have to start using locations far from power lines and far from markets, at much greater cost.

In short, wind power is not unlike a poison that makes you mildly ill in small doses but that will put you in the hospital in large doses.

Wind power gets really expensive when you add electricity storage.  Fanatical greens demand 100% green.  That means no backup plants burning fossil fuels.  They want to store the electricity for use when the wind stops blowing.  There is only one method of storing electricity that is affordable and efficient: pumped storage.  Pumped storage requires two reservoirs at different altitudes and a reversible hydroelectric plant.  Water is pumped up to store energy and is run down through the turbines to recover the stored energy.  Less than 20% of the electricity is wasted in the round trip up and down the mountain.  If your wind turbines are in Iowa, where there is a lot of wind but no mountains, you have to run power lines hundreds of miles to a location where you can build pumped storage plants.

The graph below compares the cost of electricity from various sources. 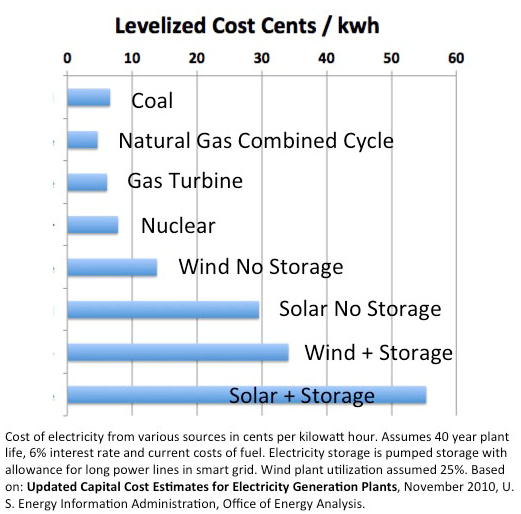 If it weren't for massive government subsidies and mandates, nobody would be building wind farms.  The biggest subsidy in the subsidy tangle is the production tax credit.  The government promises to pay, for the first 10 years of a windmill's life, 2.2 cents per kilowatt-hour, adjusted for inflation, for power generated by wind.  This is scheduled to terminate at the end of 2012, and the wind energy lobby, opposed by under-financed good government types, is lobbying to have it renewed.

Of course, the extremist environmental groups are in bed with the wind industry.  Believers in global warming catastrophe should be aware that there is one really effective and proven way to get rid of CO2 emissions from generating electricity: nuclear power.  The environmental organizations killed nuclear power in the 1970s, though, so it is a bit difficult for them to now rediscover the virtues of nuclear power.  Their alternative is wind power.

So the next time someone mentions sustainable energy or green energy, be nice.  Remember: they are probably just ill-informed due to the barrage of propaganda from special interests and ideological extremists pretending to be stewards of the Earth.

Norman Rogers is a senior policy adviser at the Heartland Institute, a Chicago-based think-tank.  He writes extensively about global warming and green energy.  He maintains a personal website.