Warning: mysqli_free_result() expects parameter 1 to be mysqli_result, bool given in /var/www/html/americanthinker/admin/common/functions/func.general.php on line 126
 What I Saw During Operation Pillar of Defense - American Thinker
|

What I Saw During Operation Pillar of Defense

Four years ago, watching the coverage of Operation Cast Lead from the comfort of my dorm, I was a conflicted college student. As supportive as I was of Israel, I still found it painful any time I heard about civilian casualties in Gaza. What I saw portrayed in the media didn't add up: on the one hand I knew that the IDF was engaged in careful efforts to prevent civilian casualties, despite Hamas's strategy of fighting from amongst its own civilian population. Yet the media made it seem like the IDF was actively targeting civilians.

Back then, I understood Israel's efforts at protecting civilians as a something akin to a talking point -- I had no personal involvement in the conflict. Yet I had no idea how true it is until I myself participated in last week's Operation "Pillar of Defense" as an officer in the IDF.

When I moved to Israel and enlisted, I joined a unit called the Coordinator of Government Activities in the Territories (COGAT), which is devoted to civilian and humanitarian issues.

As an International Liaison Officer in the Gaza office, my job primarily entails coordinating transfers of goods, aid, and delegations into Gaza. I work closely with representatives of the international community, and although our perspectives may differ, we maintain relationships of mutual respect born of a common goal; I am here to help them succeed in their work improving the quality of life in Gaza.

While the day-to-day work is challenging in Gaza, I learned over the past ten days that the true test comes with crisis. At exactly the point where most militaries would use the heat of war to throw out the rulebook, we worked harder than ever to provide assistance wherever and whenever possible. 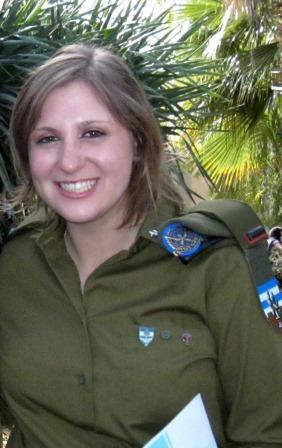 The eight days of Operation "Pillar of Defense" have been some of the hardest I have ever known physically and emotionally. The college student from Arizona would never have thought it possible to work 20 hours a day, fueled only by adrenaline and longing for just an hour of sleep on a shelter floor -- wearing the same filthy uniform because changing, much less showering, wouldn't allow me to get to a shelter in time when the next rocket barrage hit. And no, wearing the green uniform does not mean that you aren't afraid when the sirens sound.

Had you told me four years ago that there were IDF officers who stayed up all night under a hail of rockets, brainstorming ways to import medical supplies and food to the people of Gaza, I am not sure I would have believed you. But I can tell you it is true because I did it every night.

What amazed me the most was the singular sense of purpose that drove everyone from the base commander to the lowest ranking soldier. We were all focused completely on our mission: to help our forces accomplish their goals without causing unnecessary harm to civilian lives or infrastructure.

It is harder to explain the emotional roller-coaster -- how proud and relieved I felt every time a truck I coordinated entered Gaza, and how enraging it was when we had to shut down the crossing into Gaza after Hamas repeatedly targeted it. Or how invigorating it was help evacuate two injured Palestinians from the border area, only to be informed minutes later that a terrorist had detonated a bomb on a bus near my apartment in Tel Aviv.

So after all that I see and do, nothing frustrates me more than the numbers game that is played in the media. The world talks about "disproportionate" numbers of casualties as the measure of what is right and wrong -- as if not enough Israelis were killed by Hamas for the IDF to have the right to protect its own civilians from endless rocket attacks.

In my position, I see the surgical airstrikes, and spend many hours with the UN, ICRC, and NGO officers reviewing maps to help identify, and avoid, striking civilian sites. One of our pilots who saw a rocket aimed at Israel aborted his mission when he saw children nearby -- putting his own civilians at risk to save Gazans. At the end of the day, what these "disproportionate numbers" show is how we in Israel protect our children with elaborate shelters and missile defense systems, whereas the terror groups in Gaza hide behind theirs, using them as human shields in order to win a cynical media war.

What's really behind the headlines and that picture on the front page? Every day, I coordinate goods with a young Gazan woman who works for an international aid organization. Last month we forged a bond when we had to run for cover together when Hamas targeted Kerem Shalom Crossing -- attacking the very aid provided to its own people. During the eight days of Operation "Pillar of Defense", not one passed without a phone call, just to check in. "Are you ok?" I would ask. "I heard they fired at your base. Please stay safe", she would reply. And every night I made her promise to call me if she needed anything. These are the things that the media fails to show the world, just as they underplay how Hamas deliberately endangers civilians on both sides of the border -- by firing indiscriminately at Israel from Gaza neighborhoods.

Maybe stories such as these make for less exciting headlines, but if they received more attention there would perhaps be more moral clarity, and thus more peace in the Middle East.

2nd Lt. Nira Lee is an Arizona native. She moved to Israel in 2010 and has been serving in the IDF for the past two years. She works as a liaison officer to international organizations out of the Gaza Coordination and Liaison Administration