Warning: mysqli_free_result() expects parameter 1 to be mysqli_result, bool given in /var/www/html/americanthinker/admin/common/functions/func.general.php on line 126
 Obama Fiddles while China Gets Jeep - American Thinker
|

Obama Fiddles while China Gets Jeep

In December 2011, a few American-made vehicles were getting over China's high 25% tariff barrier, so the Chinese government raised the barrier.  According to The Guardian, China raised its tariffs on GM cars by as much as 22% and on Chrysler cars by as much as 15%:

General Motors faces the greatest impact, almost 22% extra on some sports utility vehicles (SUVs) and other cars with engine capacities above 2.5 litres. Chrysler faces a 15% penalty, while a 2% levy will be imposed on BMW, whose US plants make many of the cars it exports to China.

Existing taxes and duties already push up the cost of US imports by 25%, and the new levies make it even more expensive for Chinese consumers to buy American.

GM caved in April when it agreed to build several new Cadillac factories in China.  Chrysler caved last week.  On October 22, Bloomberg reported that Fiat, Chrysler's owner, is preparing to build new Jeep factories in China and may eventually import Jeeps from China.  Here is how the Bloomberg article began:

Fiat SpA (F), majority owner of Chrysler Group LLC, plans to return Jeep output to China and may eventually make all of its models in that country, according to the head of both automakers' operations in the region.

Fiat is in "very detailed conversations" with its Chinese partner, Guangzhou Automobile Group Co. (2238), about making Jeeps in the world's largest auto market, said Mike Manley, chief operating officer of Fiat and Chrysler in Asia. Chrysler hasn't built Jeeps there since before Fiat took control in 2009.

China gets not only the jobs that these factories provide, but also the made-in-America technologies developed by Cadillac and Jeep.  In 2009, Bloomberg reported ("GM Set for 'Harder Life' in China as Partner SAIC Adds Models") that GM's required Chinese partner is already using GM's technologies to produce cars for the Chinese market, outside its partnership with GM.

The feckless Obama administration did file an ineffective WTO complaint on July 5.  It requested "consultations" with China regarding the raised tariffs.  After China gets all of the auto factories that it sought with these tariffs, it will probably agree to reduce them back down to its customary 25%, and the Obama administration will claim victory.

Meanwhile, President Obama's merchandise deficit (net exports of goods) with China keeps worsening, as shown in the graph below: 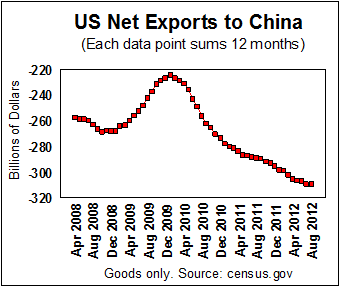 The $309-billion deficit for the twelve months ending in August represents approximately 3 million manufacturing jobs that would have been obtained had the Obama administration insisted, as permitted by WTO rules, that China buy our goods when we buy theirs.  Instead, the Chinese government only lets its people import 29¢ from us for every $1 that we import from them.

[The Chinese are] making some progress; they need to make more. That's why on day one, I will label them a currency manipulator, which allows us to apply tariffs where they're taking jobs. They're stealing our intellectual property, our patents, our designs, our technology, hacking into our computers, counterfeiting our goods.

They have to understand we want to trade with them. We want a world that's stable. We like free enterprise, but you've got to play by the rules.

President Obama has let the Chinese government keep out American goods, forcing American companies to build their factories in China and give away their proprietary technologies to their Chinese competitors in order to access China's growing market.

If elected, President Romney will require much more trade reciprocity.  American companies should be able to build factories in the United States and protect their proprietary technologies without losing access to China's growing market.

The authors maintain a blog at www.idealtaxes.com and co-authored the 2008 book Trading Away Our Future.  Dr. Howard Richman teaches economics online.  Dr. Raymond Richman received his economics doctorate at the U. of Chicago from Milton Friedman.  Dr. Jesse Richman is associate professor of political science at Old Dominion University.