Who would have thought the ubiquitous education superstar Michelle Rhee would be sitting next to Andy Stern on the board of the Broad Foundation?  Yes, that's right.  The Republican governors' siren and CEO of StudentsFirst works alongside the former SEIU leader, who's visited the White House more than anyone else in the past four years and who said "workers of the world, unite" back in 2007.

Stern is the same guy who called the left-leaning former KB Homes executive Eli Broad his "favorite billionaire" in 2005 when the union elites and progressive business owners got together to seriously implement their fundamental transformation of the educational system.  Broad is one of Rhee's major investors and once called her the newest exciting change agent.

But you see, no one (except us) on the conservative side appears to be getting the con game going on 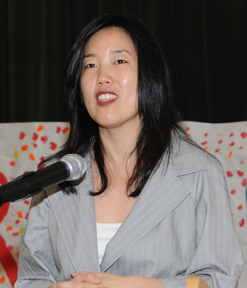 with Rhee and Broad and, of course, the Obama regime. At the 2008 Hofstra University presidential debate, then-Senator Obama gave a shout-out to newly appointed D.C. Chancellor Rhee as a "wonderful new superintendent who's working very hard."  Now, Rhee's name pops up on top of the list for possible replacements if Arne Duncan decides to step down.

Why have so few vetted a woman who has followed Obama's educational game plan to the letter?  Does no one care that her own non-profit The New Teacher Project and Wendy Kopp's Teach for America, where Rhee began her short-lived teaching career as one of Kopp's star recruits, received funding from the far left's anti-American Joyce Foundation, the Soros Open Society Institute [1], and the Chicago Public Education Fund, an offshoot of Obama's and Ayers's Chicago Annenberg Challenge?

Does no one care that Rhee calls herself a "leftie" and "progressive" but is welcomed into conservative arenas?  Does it not matter that she showed up for a one-day panel discussion in Chicago in 2004 sitting next to the president of the Joyce Foundation?  Another radical was also in attendance: John Ayers, the communist with a small c and Bill Ayers's brother.

David Horowitz's Discover the Networks site has all the dope on Joyce.  The non-profit is hell-bent on handing this country over to the left, lock, stock, and barrel (check out their efforts to do away with the Second Amendment).

Does anyone care to find out why Rhee's resume reads like science fiction?  She claims to have upped scores in her three-year teaching stint in Baltimore from 13% to 90% proficiency in reading and math for her second- and third-grade classes.  No records of this exist.  Nada.  It's straight out of the Obama playbook.  She could say she was the first woman on the moon, and Americans, who have long since regarded objective truth, facts, and logic as relative, would believe her.

The education reformer flew into D.C., broom and all, to "sweep" the old teachers and principals out, with absolute authority granted her by Mayor Adrian Fenty.  Craftily, like a double agent, she spoke conservative-ese fluently.  She bamboozled conservatives, who praised her "take no prisoners" reforms.  She took on conservatives' "bootstrap" attitude by decrying those evil soccer trophies sitting unearned in kids' bedrooms.

The right acted just like the zombies on the left; they didn't even think to ask, "Who is this woman, where did she come from, what's her record?"  She sang the anti-union, bad teachers marching song, and conservatives -- even Tea Party-affiliated conservatives, the same ones who were open to vetting the president's radical past -- got behind her.

Her tenure in D.C. was marred by a cheating scandal so bad that parents and administrators demanded an investigation.  Three different authorities (D.C. inspector general, OSSE, and federal DoED) ended up "investigating" the high number of erasures on standardized tests at some schools, but true to progressive form, the Washington Post just ran an article exonerating Rhee of any misdeeds during her time in Washington.

But it was touch and go for a while.  Obama's secretary of education had to get involved, promising that his inspector general would look into the matter.  In a blatant appearance of impropriety, a few months later, Duncan was sharing the same stage with Rhee at a data quality education conference.  They were like two peas in a pod.  Progressives don't worry about pesky little issues like conflicts of interest.  Still, no Republican governors or conservative education reformers questioned her affiliation with a longtime Obama crony.

Rhee's crony from TNTP was her number-two in D.C., Kaya Henderson.  As Rhee's bodyguard, Henderson kept truth-seekers away.  The barely literate Henderson -- e.g., "D.C.'s public schools is [sic] tearing it up" (watch the video) -- now runs the D.C. school system.  How convenient.  She was able to effectively dissolve the investigations into irrelevancy.

Republicans buying into the left's "bipartisanship" snare should do what any self-respecting conservative does when he discovers he made a big mistake: call a press conference and renounce his previous position.

Here's what Anita MonCrief, an ACORN whistleblower and friend of the late Andrew Breitbart, said (see video) about the calls for bipartisanship coming from the left.

They (those with socialist intentions) decided the best way to win was to assimilate into American society...they went into the non-profits, they went into academia and in some cases they even went into the Republican Party so they could claim bipartisanship which is how a lot of these groups get funded when Republicans have power.

In all fairness, the left is strategic and knows how to take advantage of Republicans -- for instance, former Florida governor Jeb Bush.  In March 2011, Obama and Bush appeared on stage together at a Miami high school in a "bipartisan push for education."  But we well know that the call for common ground by progressives always ends with progressive control.

In another example of the left's tricks against the right, communists Bill Ayers and Mike Klonsky (Obama's 2008 campaign "social justice" education blogger -- see article chock-full of info) played devil's advocate to shore up Rhee's credibility as a friend of the right.  Their blogs were filled with anti-Rhee rants.  The Republicans took this at face value, falling into the trap.  They determined that if the communists hate her, she's one of us.  Of course, socialists like education historian Diane Ravitch also trashed Rhee, but whether she and many others are in on the endgame is still unknown.

But Republicans don't seem to care.  Conservative victims of "bipartisanship" like Kyle Olson of the Education Action Group praise Rhee (see the intro to his book [2]) but trash Ayers.  Wait 'til he gets a load of the two together.  It won't be long now that Obama's got a second term.

Rhee now sits alongside Andy Stern on the Broad board.  She's outed herself as a progressive, and her book, entitled Radical, will hit the shelves in February 2013, just in time for the other radical's inauguration.  What a coincidence -- kind of like Bill Ayers living in the same neighborhood as Obama, launching Obama's career, and working with Obama in Chicago...but Ayers is "just a guy in the neighborhood."

It's way too late for conservatives and Republican governors to denounce Rhee.  She's in.  The Obama regime's plan to nationalize curricula, to regulate schools from D.C., and to ramp up Marxist indoctrination in government-run charter schools will materialize before our eyes.