Warning: mysqli_free_result() expects parameter 1 to be mysqli_result, bool given in /var/www/html/americanthinker/admin/common/functions/func.general.php on line 126
 The Swedish Model: Government Austerity - American Thinker
|

Sweden, like Norway, is often held up as a country which is "socialist and successful."  For example, Sweden has high taxes yet also has had healthy economic growth recently.  In this century so far, Sweden's total tax bite amounted to 52% of GDP, while the U.S.'s was 32%.  Yet Sweden's real GDP grew 2.3% per year from 2001 to 2011, and ours grew only 1.6% per year.  Prima facie evidence that high taxes don't kill an economy, right?

In July I deconstructed the Norwegian "Miracle," the other "socialist and successful" country.  It's Sweden's turn now.

Sweden, like Norway, consists of a small, not very diverse, mostly white and Christian people.  Its population is 9.1 million -- a bit less than North Carolina's.  (There are 13 cities in the world with bigger populations.)  Not only are native Swedes white, but so are most of Sweden's immigrants.  The CIA World Factbook lists its immigrants as "Finns, Yugoslavs, Danes, Norwegians, Greeks, Turks."  And 85% of that population is Lutheran; 85% live in cities -- 22% in the Stockholm area itself.

But unlike Norway, which is swimming in oil, Sweden is not richer than the U.S.  On a GDP per capita basis (Purchasing Power Parity), the U.S. is 20% richer than Sweden.  So Sweden has enjoyed somewhat faster growth than the U.S., at least over some cherry-picked periods of time, but it has not caught up to us in over three decades.

In short, government spending in Sweden had the effect that free-market types always predict: slow growth and high debt.  Government spending does not stimulate; it stifles, and it sticks our kids with the bill.

Around 1993, Sweden's government changed its behavior: it started spending less.  By 2011 it was spending "only" 49% of GDP.  While that is still pretty high, that represents a cut of  19% of GDP, or about what the entire federal government of the U.S. spent each year in most of the Clinton and Bush years.

By 1998, Sweden was no longer Europe's biggest spender.  By 2011, it had dropped to 9th place of 34 advanced economies.  Sweden's government is still big, but not near the biggest, and it lost a lot of weight -- the equivalent of shedding the weight of the entire federal government of the U.S.

Here is the Sweden Story in two charts. 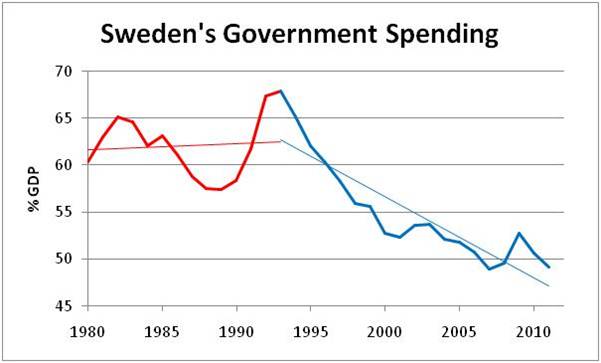 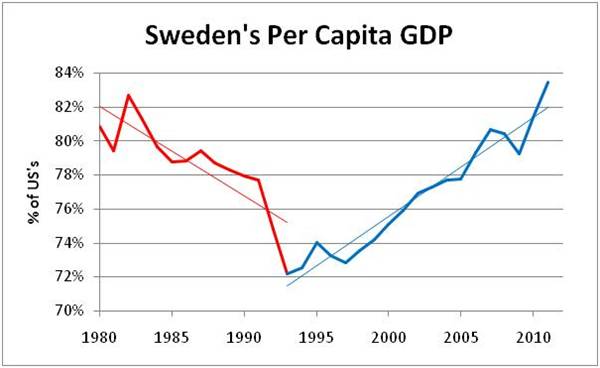 I don't know how it could be any clearer: austerity, properly understood, works.  And Keynesianism is voodoo economics.

I wrote in July that economic growth is highly correlated, negatively, to government spending.  I said that economic growth will grind to a halt once government spends about 70% of GDP.  At what point did Sweden turn itself around?  At 68% of GDP.  And in the five years before that, from 1988 to 1993, Sweden's real growth was absolutely flat -- 0%. Sweden validates my growth model.

Sweden's turnaround has not gone unnoticed.  The Pew-Peterson Commission on Budget Reform cited Sweden as one of the success stories in cutting government debt.

In the 1990s, following a financial crisis and the worst recession in Sweden since the 1930s, Sweden faced a deficit of over 11 percent of GDP in 1993. Soon thereafter, the government enacted a large deficit reduction plan to restore confidence in its currency and enhance its budgetary flexibility. It reduced its subsidies for medical and dental care, indexed certain taxes, and increased contribution rates for the unemployment benefit system. Ultimately, Sweden reduced its debt by establishing a goal to make surpluses equal 2 percent of GDP. By 2004 Sweden was running budget surpluses, and in 2008 the country's debt was 38 percent of GDP.

Look at Pew's summary of what Sweden did and compare it to what the U.S. is doing now.

Sweden "enacted a large deficit reduction plan."  The U.S. has had deficits in excess of a trillion dollars each year that Obama has been president.  President Obama's latest budget plans for a debt that skyrockets to infinity.

Sweden "reduced its subsidies for medical and dental care."  The U.S. passed ObamaCare in 2010, calling for a whole new class of subsidies.

Sweden "indexed certain taxes and increased contribution rates for the unemployment benefit system" (although it reduced the fraction of GDP it took in as revenues -- see below).  Obama makes up tax policy as he goes along, increasing rates on everything from tanning beds to medical devices, and cutting payroll taxes, the very taxes that fund Social Security and Medicare, which actuaries expect to go broke in the next decade or two.

And, of course, Sweden simply cut government spending.  Government spending in the U.S. is at post-war record highs.  The federal government in particular has been spending over 24% of GDP in every year of Obama's presidency, a significant increase over the 16 years that preceded Obama (which averaged 19.7% of GDP).

If we want to imitate Sweden's high revenues, we need to raise taxes most on the non-rich!

The real story of Sweden is that austerity works.  When Sweden's government was the biggest spender, its economy totally stalled: zero growth for five years.  What grew was its debt.  And even with extremely high taxes, it ran huge deficits.

Then it changed its high-spending ways.  It cut spending, drastically, and over an extended period of time -- going on 18 years now.

Keynesians tell us that cutting government spending will slow economic growth.  The exact opposite happened with Sweden.  Once it started cutting spending, its economy started growing: 4% in 1994 and 3.9% in 1995.  In the 18 years since it started cutting, Sweden's economy grew at twice its previous rate, even faster than the U.S.'s.

Sweden cut spending and taxes.  And its tax system is as flat as a tax system can be.

Instead of imitating Sweden's example of austerity, Obama and the Democrats are championing the exact opposite in every measure.  More spending, more taxes, more subsidies, a more progressive tax system, more Krugmanomics.  There's a word for that: delusional.

Randall Hoven can be followed on Twitter or contacted via his web site, randallhoven.com.

Data sources: The source for most comparisons above, including the two charts, was the International Monetary Fund's World Economic Outlook Database (dated April 2012).  The source for population characteristics was the CIA Factbook.  The source for U.S. federal government revenue and spending was the White House's Office of Management and Budget.