Chief Justice John Roberts could begin his next Supreme Court decision regarding ObamaCare with the following statements: "Whoops, ObamaCare is unconstitutional.  As ObamaCare involves taxes, the House -- not the Senate -- was constitutionally responsible for originating ObamaCare."

If Roberts agrees with the Pacific Legal Foundation's (PLF) recent case against ObamaCare, then Roberts, as suggested above, could reverse his decision in June 2012 that most of ObamaCare is constitutional.  On September 11, 2012, PLF sued the U.S. Department of Health and Human Services, alleging that ObamaCare violates the Constitution's Origination Clause, which reads as follows:

All bills for raising revenue shall originate in the House of Representatives; but the Senate may propose or concur with amendments as on other Bills.

PLF argues that ObamaCare's Individual Mandate, which Roberts labeled a tax in his June 2012 decision, significantly raises government revenue.  The Individual Mandate "taxes" individuals $695 and families $2,085 per year for not purchasing health insurance plans.  In Roberts' words, the mandate will produce "at least some revenue for the Government ... about $4 billion per year by 2017."  As PLF notes, ObamaCare involves multiple other taxes "estimated to increase federal revenue by $486 billion by 2019."

The Senate originated ObamaCare by "amending" House Resolution (H.R.) 3590, titled the Service Members Home Ownership Tax Act of 2009.  H.R. 3590 didn't regulate health insurance, and this bill granted tax credits to service members seeking their first homes and increased corporate estimated taxes for certain companies by 0.5%.  It's unclear why the Senate picked H.R. 3590 to "amend" over other possible House bills.  But surely one reason was because H.R. 3590, which would increase corporate estimated taxes, was a House bill for raising revenue.

The Senate's "amendment" on H.R. 3590 was a complete replacement of H.R. 3590's title and text with ObamaCare.  The following picture shows the front pages of the original H.R. 3590 and ObamaCare: 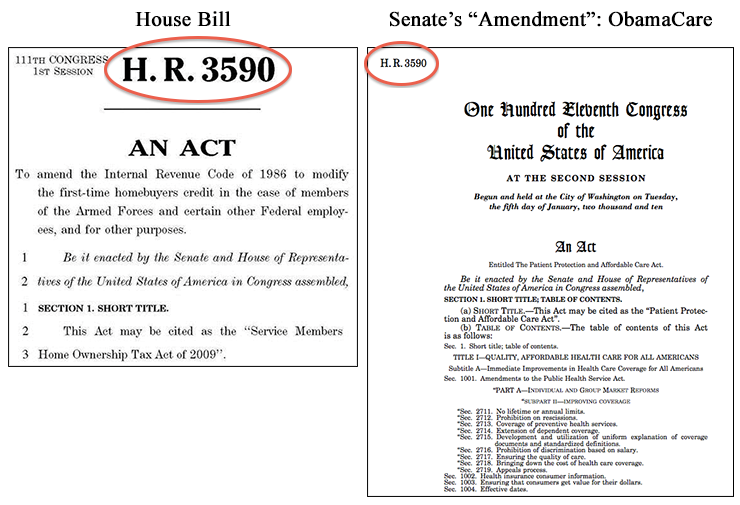 With the Senate's "amendment," a six-page, double-spaced House bill became the 906-page, single-spaced ObamaCare.  Between the House bill and ObamaCare, the only commonality is the label "H.R. 3590," circled in red.

Yale law professor Jack Balkin recently argued that the Supreme Court, under the Origination Clause, has granted the Senate leniency in replacing sections of House bills for raising revenue, even replacements unrelated to House bills' original purposes.  However, as PLF notes, the Supreme Court has never reviewed a Senate amendment that completely replaces the title and text of a House bill for raising revenue.

Legal scholars have argued that PLF's case may depend on the original meaning of the Origination Clause's "amendments" or the clause's grant that "the Senate may propose ... amendments."  For instance, Michael Stern at Point of Order has argued that ObamaCare's constitutionality may hinge on the meaning of "amendment."  Stern notes that Samuel Johnson's A Dictionary of the English Language (1768), the most widely used dictionary at the Constitution's ratification, defines "amendment" as "in law, a correction of an error committed in a process."  Stern suggests that this definition may exclude a Senate "amendment" that completely replaces the title and text of a House bill for raising revenue.

Michael Rappaport, professor of law at the University of San Diego, suggests that the original meaning of the Origination Clause's grant that "the Senate may propose ... amendments" could allow the Senate to completely replace the title and text of a House bill for raising revenue.  However, Rappaport notes that, in this understanding of "the Senate may propose ... amendments," the Senate must, before passing the bill, send the "amended" bill to the House for approval.  In ObamaCare's case, the Senate failed to take this step and simply passed the "amended" bill.

To advance Stern's and Rappaport's arguments against ObamaCare's constitutionality, PLF should consider the original meaning of the Origination Clause's requirement that Senate amendments be "on ... Bills."  The Origination Clause's relevant portion is "the Senate may propose ... amendments as on other Bills" (emphasis added).  In more complete language, this portion appears to read, "the Senate may propose ... amendments on House bills for raising revenue as on other Bills."

Although Stern doesn't mention the following definitions in his argument, Johnson's dictionary (1755) further defines "amendment" as "a change from bad for [sic] the better" and defines "to amend" as "to correct; to change anything that is wrong to something better."  Just considering these vague definitions, it's possible that senators could tout a Senate amendment that completely replaces the title and text of a House bill for raising revenue as constitutional.  For instance, Senate Majority Leader Harry Reid could have alleged that the Service Members Home Ownership Tax Act of 2009 was bad for America, and as an amendment, ObamaCare made H.R. 3590 better.

Regardless, PLF should also note that Johnson's dictionary defines "on," as in Senate amendments "on ... Bills," as "noting addition or accumulation" and "noting dependence or reliance."  "On," in Johnson's words, "is put before the word [that] ... signifies ... that by which anything is supported ... or where anything is fixed."  To clarify Johnson's definitions, consider that Dictionary.com defines "on" as "so as to be attached to or unified with; in connection, association, or cooperation with; as a part or element of."  Considering these definitions of "on," Senate amendments must be an addition to or dependent on a bill, so as to be attached to or a part of a bill.

So what's a bill, anyway?  According to Johnson, a "bill" is "a law presented to the parliament [or congress], not yet made an act," with a "law" being "a rule of action" or "a decree, edict, statute, or custom, publically established as a rule of justice."  As an "amendment," ObamaCare wasn't "on" -- that is, added to, dependent on, or a part of -- any rule of action, decree, edict, statute, or custom.  As discussed earlier, ObamaCare completely replaced the Service Members Home Ownership Tax Act of 2009 except for the label "H.R. 3590."  However, the label "H.R. 3590" isn't a rule of action, decree, edict, statute, or custom.  Thus, ObamaCare isn't a Senate amendment "on a bill" as the Origination Clause requires.  ObamaCare is only an amendment "on a bill label," so in this original understanding of the Origination Clause's "on ... Bills," ObamaCare is unconstitutional.

Discussing whether the Founders meant Senate amendments to be modifications to and never entire replacements of House bills for raising revenue, Rappaport asked, "[With a Senate amendment,] how much of the original bill must be retained? Would a single small provision be adequate? If not, how much?"  This article suggests a Senate amendment can't just leave a bill label such as "H.R. 3590."  A Senate amendment must leave at least one House rule of action, decree, edict, statute, or custom.  The Service Members Home Ownership Tax Act of 2009, the original H.R. 3590, had among others the following decrees relative to service members and corporate estimated taxes:

If the Senate had retained one of these decrees with its corresponding provisions when the Senate inserted ObamaCare into H.R. 3590, then, according to the Origination Clause, this article suggests that ObamaCare may have been constitutional.

Of course, legal scholars should seek more evidence from the Founding era, such as Founders' writings about bill amendments, to verify this article's vision of the original meaning of the Origination Clause's "on ... Bills."  If this article is correct, then PLF should tell Roberts and the other justices that ObamaCare's Individual Mandate may be a tax, but ObamaCare ain't no amendment "on a bill."  With this statement to the justices, PLF's main argument that the Senate shouldn't have originated ObamaCare will ring true.