Warning: mysqli_free_result() expects parameter 1 to be mysqli_result, bool given in /var/www/html/americanthinker/admin/common/functions/func.general.php on line 126
 Obama's Freudian Slip - He Wants to Export Jobs - American Thinker
|

President Obama told a September 26 rally at Kent State University in Ohio, "I want to see us export more jobs."  Then he caught himself and continued, "Export more products -- excuse me. I was channeling my opponent for a second."  According to Freud, such slips of the tongue reveal true intentions that a person may be trying to hide, sometimes even from himself.  Does Obama actually want to export American jobs?

Obama was misrepresenting Romney's position.  If Romney is elected, he intends to address China's trade cheating.  Philip Ruckers in the Washington Post, October 13, 2011 quotes Gov. Romney as saying, "If you cheat, there's a huge advantage. Fortunately in most of our lives, we find a way to stop the cheaters. . . we haven't done that with regards to trade. China, in particular, has realized the extraordinary advantage to cheating."

In fact, impartial observers are concluding that Romney, not Obama, will bring back exported American jobs.  On September 17, U. of Maryland economist Peter Morici, director of the Office of Economics at the U.S. International Trade Commission during the early years of the Clinton Administration ("Romney is right -- US Must Get Tough With China"), dismissed Obama's latest WTO complaint (against China's subsidies to auto parts exporters), concluding:

Campaigning in 2008, Barack Obama promised to deal with Chinese currency manipulation and protectionism, but he has failed beyond token complaints to the WTO.

It will be impossible for the United States to create the 14 million jobs needed to bring unemployment down to pre-recession levels without taking on China.

For that Americans need another president-one with the courage to stand up to China.

Obama has already exported about 415,000 jobs to China 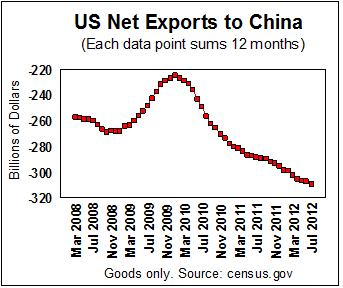 Over this period, Obama has imposed a few anti-dumping tariffs and has filed a few WTO complaints against China, but none of his actions has had any noticeable effect upon the trade balance, which, as shown in the graph above, has been worsening for 23 straight months.  For almost two years, month after month, U.S. net goods exports to China have declined as compared to the same month one year earlier.  Given this consistent trend line, if Obama is re-elected, the bleeding of jobs to China will likely continue.

Normally, when a country's economy is growing fast (China has been growing at about a 10% clip compared to a U.S. growth of about 2%), its demand for imports grows faster than its trading partners' demand for its exports.  But the Chinese government keeps out American exports through high tariffs, non-tariff barriers, and subsidies.

China is able to do this under World Trade Organization rules because, when China joined the World Trade Organization, it was given the status of an emerging nation, which allows it to keep tariffs in place, to apply tariffs to strategic sectors (in China's case, vehicles), and to impose tariffs to protect "infant industries."  (Almost every industry in China is considered an infant industry.)  WTO complaints and anti-dumping tariffs won't solve the problem.  The only way to successfully combat China's trade cheating is to invoke the WTO rule which lets trade-deficit countries take action to insist upon balanced trade.

Obama's past history on trade implies that the loss of  582,000 manufacturing jobs, about 415,000 of them exported to China, is a valid indicator of his future actions and intentions.

When President Obama campaigned for the presidency in 2008, he promised to take on China's currency manipulations.  Here is an exchange from the final presidential debate with McCain:

OBAMA: [W]e should enforce rules against China manipulating its currency to make our exports more expensive and their exports to us cheaper.... We've got to have a president who is going to be advocating on behalf of American businesses and American workers and I make no apology for that.

MCCAIN: ... Now, on the subject of free trade agreements. I am a free trader. And I need -- we need to have education and training programs for displaced workers that work, going to our community colleges.

Obama was promising to take on China's currency manipulations if elected president.  McCain was promising to re-educate unemployed manufacturing workers at community colleges for nonexistent jobs.  No wonder Obama won.

But, once elected, Obama chose Timothy Geithner to be his treasury secretary despite proven incompetency on the latter's part.  For example, in a speech that Geithner gave to the Council on Foreign Relations on January 11, 2007, just before the financial sector meltdown, he claimed that "improvements to risk management and to capital cushions are likely to have made the financial system more stable and more resilient."  Then, in September 2008, he was part of the team at the New York Fed which precipitated the meltdown by closing Lehman Brothers without providing guarantees to its creditors.

About the only thing recommending Geithner for treasury secretary was the fact that he knows Chinese, having studied in China.  As he made clear in his January 2007 speech, his position on trade policy was one that he shared with his mentor, Lawrence Summers.  He believed that our main challenge was convincing the American people of the benefits of globalization despite losses of manufacturing unemployment.

If Obama had intended to keep his promise to act against Chinese currency manipulations, he wouldn't have appointed Geithner to be his treasury secretary.

During the 2008 campaign, President Obama also highlighted his opposition to "outsourcing."  Such an emphasis is economic nonsense.  Imports from abroad hurt our economy only when trade is imbalanced.  When trade is balanced, jobs lost to outsourcing are replaced by more efficient jobs in exporting sectors.  Each country produces what it can produce most efficiently, and everyone is better off.  It is only when net exports are negative that jobs lost to imports are not replaced by more productive jobs-producing exports.

In order to highlight this issue during the 2008 presidential campaign, Obama promised that he would end an alleged tax break given to outsourcers. Specifically, he said:

[I]f you're a business that wants to outsource jobs, you shouldn't get a tax deduction for doing it.

This was never a serious proposal.  Obama probably knew that you can't force corporations to pay American income tax on profits produced abroad.  If you try, international corporations can avoid their American tax liability on foreign profits simply by moving their corporate headquarters abroad.  If Obama's proposal were enacted, it would cause corporate headquarters to leave the United States.

On September 28, 2010, Obama's anti-outsourcing bill was brought up in the Democrat-controlled U.S. Senate and killed by a unanimous vote of Senate Republicans joined by the responsible members of the Democratic caucus: Senators Joe Lieberman, Max Baucus, Jon Tester, Ben Nelson, and Mark Warner.  This has not stopped Obama from recycling this talking point for the 2012 campaign.

Obama has given the top economic adviser position in the White House to members of the Clinton administration who had arranged to get China into the WTO without requiring that it open its markets to American products.  His first National Economic Council director, Lawrence Summers, did not prove to be competent.  He had two choices for engineering a recovery (balance trade or deficit spending), and he chose the wrong one.

If Summers had required balanced trade, then, according to our statistical analysis, Obama would have reduced the U.S. unemployment rate by about 2 percentage points without adding to our national debt.  The current unemployment rate would be 6%, not 8%.  Obama could have invoked the special WTO rule for trade-deficit countries which lets them impose trade-balancing tariffs, as President Nixon did on August 15, 1971, when he imposed a 10% across-the-board tariff that balanced U.S. trade by 1973.

One such trade-balancing tariff regime, the scaled tariff, would have opened foreign markets to American products.  The rate of the scaled tariff is variable in order to take in half of our current trade deficit with each trading partner.  Trade-surplus countries like China would be encouraged to take down their barriers to our products, or they would lose market share in our markets.

But Summers instead tried to revive the economy through an $800-billion recovery plan using money to be borrowed from abroad, so Obama dispatched Secretary of State Hillary Clinton to China -- not to insist on trade balance, but to beg the Chinese government for loans.  The Taipei Times reported on February 23, 2009: "In Beijing, [Clinton] called on Chinese authorities to continue buying U.S. Treasuries, saying it would help jump-start the U.S. economy and stimulate imports of Chinese goods."  Instead of seeking to balance trade, Clinton asked the Chinese to exacerbate the imbalance!

In the second quarter of 2010, Summers' recovery summer failed to materialize due to falling net exports.  Summers had simultaneously engineered an increase in consumption (C), business fixed investment (I), and government purchases (G), based upon the following economic equation:

Unfortunately, Summers ignored net exports, and there went his "recovery summer"!  For example, during the second quarter of 2010, C+I+G increased at a recovery-inducing 4.0% rate, but falling net exports reduced GDP growth to an anemic 2.3% rate, as shown in the graph below: 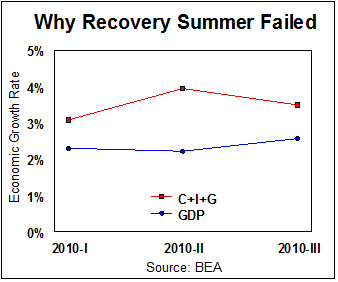 When running for office, Democrats pretend that they will do something about America's trade deficits.  But once elected, they do little or nothing.  Michael Lind put it cleverly in an article he wrote ("The Cost of Free Trade") for The American Prospect, a liberal magazine:

[T]rade divides the Democrats more than any other issue. The division is peculiar: It splits Democratic presidents into two people, the candidate and the elected official.

It's not only Democratic presidents who are duplicitous.  From 2008 through 2012, the Democrats in the House and Senate almost all voted in favor of ending China's currency manipulations without actually passing anything.  In 2010, the House passed a weak anti-currency-manipulation bill, but the Democrat leadership in the Senate tabled it.  In 2012, the Senate passed another weak anti-currency-manipulation bill, knowing that the Republican leadership in the House would table it.

Why?  According to Richard Dreyfus, writing in The Nation ("China in the Driver's Seat"), there are deep divisions within the progressive community.  On the one side, manufacturing workers' unions want to see tough action against China's trade manipulations, but on the other side, many progressives are thrilled with China's rise at our expense.

For example, frequent White House and China visitor and former SEIU president Andy Stern favors a conciliatory policy toward China because for him, Karl Marx's "workers of the world unite" is more than just a slogan.  Dreyfus also cites progressives who are pleased that China's Communist government has been able to pull so many poor people out of poverty.  He cites one progressive who accuses those who want to deal with China's unbalanced trade policy as being "yellow peril" racists.

When President Obama campaigned in 2008, he promised to deal with China's trade manipulations.  But once he was elected, he exported U.S. manufacturing jobs to China.  Now, four years later, it is campaign season, and Obama is again claiming to be the champion of the U.S. manufacturing worker.  But at some level, whether consciously or unconsciously, he knows that he has been exporting jobs and will continue to do so.  His Freudian slip gives him away.