Warning: mysqli_free_result() expects parameter 1 to be mysqli_result, bool given in /var/www/html/americanthinker/admin/common/functions/func.general.php on line 126
 Lies We Can Believe In - American Thinker
|

Lies We Can Believe In

Americans are facing the most important decision in our nation's history: do we want to continue along the path of socialism and ruin, or return to the vision of our founding fathers?  Whom do we trust to lead us, Barack Obama or Mitt Romney?

Both candidates promise us what they think we want to hear.  In many cases they are promising the same thing: economic security, new jobs, abundant energy, and personal freedoms.  But the two candidates define these things in very different ways.

I don't know how anyone can still be undecided three weeks before the presidential election.  The stark contrasts between candidates should make things easy for even the most wobble-headed.  And yet it is the undecided voter who will determine America's fate.  How will the undecideds make up their minds?  Will they vote their wallets?  How can they know which candidate will rob them and which will reward them?  It may come down to people probing their gut instinct to decide which candidate is telling them the truth. 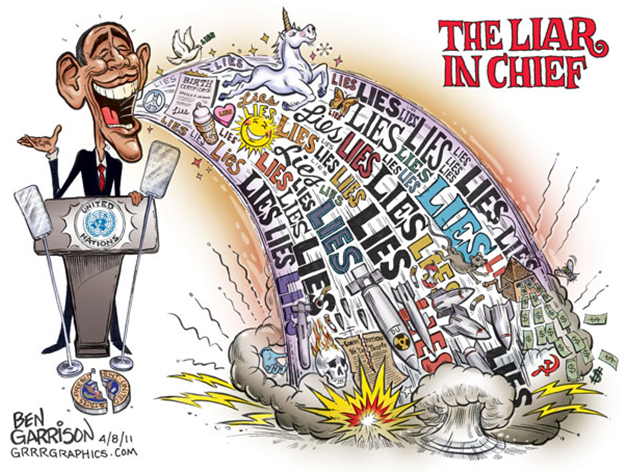 Truth as a Hate Crime

Is Romney a liar?  No.  I'd say so if he was.  Romney has a long track record that shows he is a truthful man.  He is a flip-flopper, and you have to worry about someone's principles when he flips and flops around like a slippery fish on the political dock.  But if you look into his reasons for changing positions, they are generally good ones.  Or at least they're understandable.  A governor in a secular society will have to compromise his personal principles from time to time, and only a fool will not change his position if new information sheds a different light on things.  People who know Governor Romney describe him as a truthful man.

This is not the case with Obama.  Obama is a different kind of person altogether.  He is unique, and not in a good way.  Most Americans understand that when Obama is speaking, he is lying to them to some degree.  A lot of people accept being lied to this way.  Most don't.

Obama spent the last fragments of his credibility long ago.  The problem with Obama is that everything he has told us about himself has turned out to be untrue to some degree.  He had to create a false image in order to sell himself to the American people.  If Obama ran on his actual life story, he couldn't get elected dogcatcher outside Illinois.

Both of the books Obama wrote about himself, Dreams from My Father and The Audacity of Hope, are largely fictional.  Joel Gilbert, in Dreams From My Real Father, makes a credible case that Barack Hussein Obama isn't Obama's real father at all.  No dreams from a Muslim Kenyan communist.  Gilbert believes that the communist writer Frank Marshall Davis is Obama's biological father and was his ideological mentor.  Dreams from an atheist pornographer and anti-American, communist agitator.  Which do you prefer?  If President Obama would open up his birth files, we might be able to get to the bottom of the matter.  He must have good reasons for concealing his true beginnings from us.  About two million bucks' worth of reasons.  What else is he hiding?

Dreams is filled with composite people and falsified scenarios.  He wrote of a white girlfriend in New York who, it was later determined, wasn't a real person.  She was a composite construct from his imagination.  But who really wrote Obama's two autobiographies?  Jack Cashill believes that Obama's first political guru, the infamous Weather Underground bomber and murderer William "Bill" Ayers, wrote Dreams.  In Deconstructing Obama, Cashill investigated the literary style, content, and sentence construction of the two books and concluded that Obama could not have written them.  Somebody else did.  And Cashill believes that, at least in the case of the much more popular Dreams, that somebody is Bill Ayers.

Obama told us he was born in Kenya, and that was a useful story until he decided to run for president.  Then the story changed, and he was born in Hawaii.  Or was he?  There is so much controversy surrounding his birth records that we can't even be sure where he was born.  Why does he have a Social Security number from Connecticut?  Neither he nor his parents ever lived there.  How about his Selective Service records?  His passport records?  These files have been forged or tampered with, or they have mysteriously disappeared.  His passport trail includes an unsolved murder.  Why?  How can we believe anything about his personal history?

Obama through the Looking-Glass

Looking at Obama is like peering into a circus trick mirror.  Depending on which way you look, the image is distorted differently, but it is always distorted to some degree.  Except for the general outline and warped center, you can't tell much about the original object.  The closer you get, the more the illusion stretches and bends into a macabre optical fantasy.  Like trying to sort out anything Barack Obama says.  The more you investigate, the closer you look, the sillier and more convoluted it gets.

Barack Obama has lied to us throughout his presidency.  Obama lied when he told a joint session of Congress in 2009, "I will not sign a plan that adds one dime to our deficits either now or in the future."  Paul Ryan called him out on these lies and told Obama to his face where the double-accounting, factual errors, and misrepresentations were in the proposed legislation.  The look on Obama's face in this exchange is telling.

Obama lied to the American people when he said that under ObamaCare, the cost for health care would not go up, that the middle class would not spend "a single dime" in increased taxes to pay for it, that ObamaCare would actually reduce the federal deficit by the cost savings it would create, that you could keep your current doctor and plan, and that 30 million more people would have health care coverage.  None of this is true.

ObamaCare is riddled with lies and accounting tricks, double-counting Medicare money, and hidden regulations, taxes, and fees.  Obama has been constantly and deliberately lying to us about ObamaCare from the beginning.  Why?  Because that's how important ObamaCare is to his agenda.  ObamaCare has little to do with actual health care.

Barack Obama has been spiking the football ever since SEAL Team Six went behind enemy lines and killed Osama bin Laden.  However, new information indicates that the CIA and military didn't include Obama in the decision loop for the "execute" order because they didn't trust him.  Obama was informed of the strike only after the Special Operations helicopters had passed into Pakistani airspace -- too late for him or Valerie Jarrett to do anything about it.  Where was Obama when he took this call?  On the golf course.  The fact is, Obama's national security advisers didn't trust him and didn't want him in the decision loop.  Obama has been lying to the American people about his role in the killing of Osama bin Laden.  Stolen valor is a particularly odious form of deception.

Obama's political campaign runs on the fuel of deception.  Obama and his supporters have claimed that Romney caused a woman to die from cancer, that he has closed down manufacturing plants and outsourced the jobs to China, and that he has made his money by cheating honest folks out of their jobs.  What a pernicious pack of prevarications.

Democrat Rep. John Lewis claims that if Romney is elected, segregation will return to America.  He doesn't seem to know that it was Democrats who founded the KKK, wrote and enforced Jim Crow laws, and fought in the streets against desegregation.  It was Democrats who wielded the fire hoses and unleashed the German Shepherds on our citizens.  It was Obama's vice president, Joe Biden, who told blacks at a political gathering in Virginia that Republicans were "gon' put y'all back in chains."  This is race-baiting and racial slander at its most despicable.  The racial intimidation against black conservatives is particularly abusive.  Just ask Stacey Dash.

Obama and his followers are promoting the fiction that Obama rescued the economy.  He actually sent it into a tailspin.  San Diego Mayor Julián Castro said, in his keynote address to the 2012 DNC in Charlotte:

Four years ago, America stood on the brink of a depression. Despite incredible odds and united Republican opposition, our president took action. And now we've seen 4.5 million new jobs.

What a howler! Castro neglected to tell people that during this time, five million jobs were lost, and 23 million Americans remained out of work.  The best thing we can do to grow jobs is kick Obama out of office.  It doesn't matter who replaces him.  Things will get better with him gone.

Obama was certain that his "war on women" meme would drive female voters his way.  However, women are far less "fact-challenged" than the Democrats believe.  Besides, Paul Ryan is still hawt.  These two realities bode well for Romney/Ryan.  But Obama needs this crucial demographic, so look for a flurry of untruths about Republicans banning abortion, repealing ObamaCare benefits, taking food stamps out of the mouths of their babies, and throwing them all into the streets to die.

The "war on the middle class" rhubarb also fizzled.  Nobody believed it.  At least not yet.  It is a preposterous notion and an idiotic lie.  But Obama put lipstick on that pig and swung it hard in the last debate.  He'll deploy it like a nuke in the next one.  You betcha.

Obama, Axelrod, Plouffe, Jarrett, and the mainstream media are getting desperate.  Nothing they have slung is sticking to Romney.  They don't have a bimbo they can erupt like they did against Herman Cain.  Romney and Ryan are squeaky-clean and none of the dirty linen the Dems dug up against Cain or Gingrich even exists.  That won't stop them from fabricating some, though.  They would love to attack both men as overly religious and sanctimonious, but they've already alienated God by kicking Him off the party platform and roughing up His churches.  It's dangerous to push your luck this way.  But Obama and his people will.

Obama is running out of time.  He needs an October surprise.  He has to focus his message on undecided voters in swing states.  They're the ones who matter.  Obama has to paint himself as the lesser of two evils and make Romney into an evil, greedy Republican hobgoblin.  Then he has to convince the undecideds that only he can rescue them with his shiny new government programs.  Paid for by China and the unicorns.

The only way Obama can accomplish these objectives is to viciously slander Romney and the Republicans.  This does not mean a change in Obama's methods.  This is what he does.  It's the Chicago Way.  The short time remaining until election day will produce a barrage of horrific lies from the Obama camp.  Romney will try to counter them and make his case for the presidency.

America's fate will be determined by millions of people who cannot make up their minds.

May God help us.

J.T. Hatter is the author of Lost in Zombieland: The Rise of President Zero, a political satire on the Obama administration.  J.T. can be reached at jt@jthatter.com.