Warning: mysqli_free_result() expects parameter 1 to be mysqli_result, bool given in /var/www/html/americanthinker/admin/common/functions/func.general.php on line 126
 I Dream of GINI - American Thinker
|

I Dream of GINI

Imagine you are young and unattached -- unattached from everything: family, friends, country.  A Martian takes you up in his spaceship and offers to set you down in one of two countries where you will have to make your way in life.  All he tells you is that the average income in Country A is $49,000 and that of Country B is $40,900.  You would probably pick A, right?  It's 20% richer.

Now, what if your Martian host offered a bit more information?  He gives you the distribution of incomes in those same two countries. In fact, he shows you this graph. 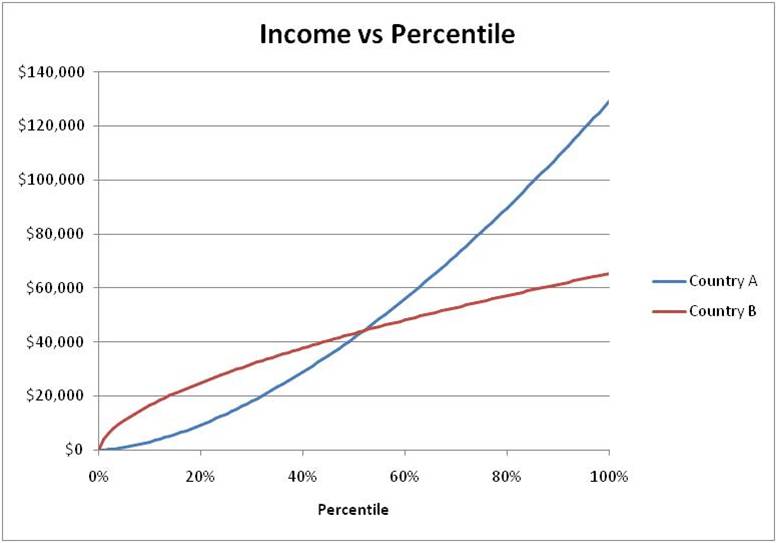 In fact, Country A is the U.S., and Country B is Sweden.  My data source was the CIA's World Factbook, but you have to trust my interpretations of the CIA's data for now.  The key point is the concept, not the exact numbers.  (An explanation is provided at the end of this article.  I admit that this is all a bit speculative.)

I think this explains quite a bit about U.S. elections, don't you?  Conservatives are aghast to think that we might become too much like Europe.  Liberals ask, "What's so wrong with Europe?"

If you are near average, you'd make about $43K in either country.  But what if you think you are above average, or could be, and you are willing to work hard to achieve your potential?  Let's say you could put yourself at the 80th percentile (top quintile) if you went all-out.  In Sweden, that would get you an income of about $57K, but in the U.S., it would get you almost $90K.

Work your butt off in Sweden, and you make about one third more than the Average Sven.  Do the same in the U.S., and make more than double the Average Joe.

Now, Sweden is not all that representative of Europe and should not be compared to a country the size of the U.S.  For one thing, Sweden's population (9 million) is not even 3% that of the U.S.  The U.S. has 10 states with larger populations.  A better comparison with the U.S. (314 million) would be to France (64 million) or to the European Union as a whole (503 million).  Here are those comparisons. 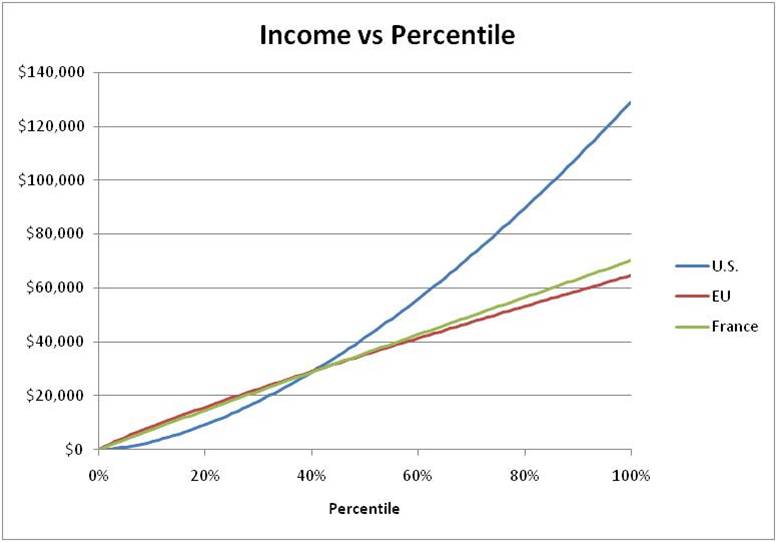 France is fairly representative of the EU as a whole.  The top three quintiles are generally better off in the U.S. than in France or the EU.  All else equal, one would expect the majority of voters in the U.S., about 60% of them, to want to keep U.S. economic policies as opposed to adopting France's or the EU's.

The key concept here is the possible explanation of why a certain segment of the population would be willing to accept a smaller GDP, meaning a less wealthy nation overall, if that wealth were spread more evenly.  We as a country are about 20% to 40% richer than Sweden, France, and the EU.  But about 40% to 50% of us would be better off, as individuals, with the economy of one of those other countries (all else equal).

We are not talking about cutting up a fixed pie differently.  Even knowing the overall pie would shrink, a healthy portion of the population would be better off with more equality.  That portion of the population, by voting to adopt more European policies, would be acting rationally.  Yes, such policies would hurt the overall economy, but the bottom 40%-50% (let's call it 47%) would be better off.

Implicit in such thinking is the assumption that we could be like Europe, income distribution-wise, and nothing else would change.  There is a fly in that ointment, but I'll save that discussion for another day.

And that, boys and girls, is today's lesson in why so many people vote Democrat.  Half of us are below average.  OK, maybe only 47% of us.

Addendum for those who are interested in the "Hoven Index" and are not afraid of math.  All the data used in this article were based on the CIA's World Factbook.  The Factbook provided two numbers that I used for income distribution purposes: (1) GDP per capita (PPP), which I will call "P," and (2) the Gini Index (a measure of statistical dispersion), on a 0-100 scale, which I will call "G."

Here are my handy-dandy formulas for converting those numbers to share of the wealth and to income, for any particular percentile of the population.  (Genuine measurements of these income distribution numbers comparable across countries are hard to come by.)

Share of total income (for bottom x of population) = xa.

(I appeal to real economists to assure themselves that these formulas generate income distributions matching the given Gini Index.  If they don't, feel free to leave a comment or e-mail me to the effect that I'm a dumbo who doesn't know what he's talking about.)

Here is a chart for Share of Income, over all percentiles up to 98.2, comparing actual 2009 IRS data to the Hoven Index based on the CIA World Factbook.  (IRS does not go to 100% by income group due to some incomes being negative.) 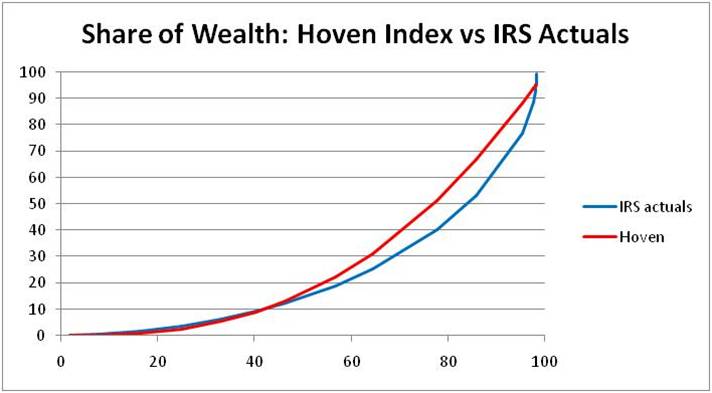 The Hoven Index is not perfect, of course.  Obviously there are people in the U.S. making more than $130,000 per year.  The Hoven Index is no good at the very high end of the income distribution, about the top 10%.  But I think it's pretty good for the vast middle parts of these curves.

This is only a first, rough, approximation.  The CIA does not even tell us if it computes pre-tax or post-tax Gini, or if it includes government transfer income, or if it is consistently defined across countries.  These imperfections of the CIA's Gini Index (or anyone's Gini index) will tend to skew income distributions.  But blame the CIA for that, not me.

I humbly consider the Hoven Index a Fermi Estimate, or an income distribution model for the rest of us.

... the estimation of rough but quantitative answers to unexpected questions about many aspects of the natural world. The method was the common and frequently amusing practice of Enrico Fermi, perhaps the most widely creative physicist of our times. Fermi delighted to think up and at once to discuss and to answer questions which drew upon deep understanding of the world, upon everyday experience, and upon the ability to make rough approximations, inspired guesses, and statistical estimates from very little data.