Warning: mysqli_free_result() expects parameter 1 to be mysqli_result, bool given in /var/www/html/americanthinker/admin/common/functions/func.general.php on line 126
 Explaining the Media Devotion to Obama - American Thinker
|

Explaining the Media Devotion to Obama

Why the media free pass for Obama?  A fraternal kinship may be the reason why the mainstream media has failed to properly vet presidential candidate Barack Obama in 2008 and even now.  Juvenile life experiences cement relationships, especially when self-righteous people are nostalgic about defiantly breaking the law.

My first encounter with the kinship of the unlawful was in my freshman year of college.  It was the fall of 1969.  All the draft-age boys in my college dorm were required to meet one evening in the cafeteria.  We observed a national television broadcast where they pulled ping-pong balls out of a hopper with the different days of the year on each ball.  The balls were selected randomly until all the balls were drawn.  The sequence of the drawing determined your position in the draft lottery based upon your birthday.  If your birthdate was one of the first 180 days drawn, you were designated for military service, and, most likely, you were on your way to Viet Nam.

After the last birthday was read, and birthdays assigned to numbers sequentially as drawn, a somber reality set in that overtook the freshman class.  A full-spectrum emotional mix ranging from crying to sheer jubilation drove a mob mentality that resulted in a freshman class, anything-goes, intoxicant free-for-all.  It was an all-nighter, including bonfires, fast cars, and total carelessness.  By happenstance the dorm drug dealer's room turned out to be directly across the hall from my dorm room.  He always had a number of guests, but on this night, there was no attention to secrecy.  Somehow he was able to continue to operate without notice.

In the following weeks, I began to visit with him the way you do with neighbors.  One day, out of curiosity, I asked him who his best customers were, and without hesitation, he replied, "Journalism students."  I began to pay attention to which students were his frequent customers, and I was able to formulate linkage to his best customers...journalism students.  I also noticed their adoration of the drug dealer -- he was held in high esteem.  I can remember how he would humorously quip about how miserable the flower-power people were when they had an empty bag of weed.  They were all members of the illicit drug use fraternity.

Years later, while perusing the internet, I noticed a story about the aftermath of Operation Pipe Dream.  The story centered upon how motion picture drug culture icon Tommy Chong was expected to receive a jail sentence for selling bongs online.  Over 55 similar businesses were busted in the Pipe Dream sting operation.  I had a bad feeling about the future.  The country was somewhat united because we had drawn together after the September 11th national tragedy.  Almost immediately after the Pipe Dream news story describing Chong's presumed fate, I began to notice a change in tone towards President Bush from the media.

There was the actor Tim Robbins, who spoke of a "Chill Wind," and then there was the television commercial that depicted President Bush as a Nazi.  The vitriol became intense; hate spewed from the drug use fraternity.  Bush had unleashed the anger of disgruntled drug users and drug legalization advocates.  He had imprisoned an icon of the drug use fraternity.  His sting operation enraged the mainstream media.  Anybody but Bush became the mantra.

Operation Pipe Dream was possibly the impetus for the entry of "Daddy Weed Bucks" into the political arena.  The sting operation angered George Soros so much that he vowed that defeating President Bush was "the central focus of my life" and a "matter of life and death."  The drug culture magazine Heads, who coined Soros "Daddy Weed Bucks," had asserted that he knew exactly where to put his money to accomplish his goals.  Indisputably, he kept his vow and put his money to work.

Within months of the sting operation, Dope Lobby members joined the Shadow Party at Soros' 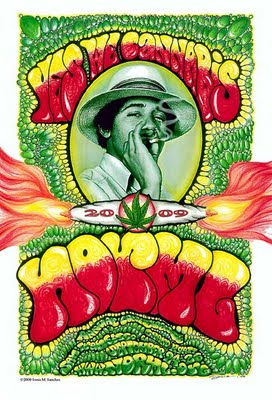 Hampton home.  Plans were put into place which resulted in the formation of the Center for American Progress, Media Matters, and several other organizations focused on removing Bush, spoon-feeding the press, and legalizing illicit drugs.  Disgruntled drug users now had a billionaire advocate who was determined to change America.  A symbiotic relationship between the immoral and the illicit was born.  Soros contributed $5 million to radical leftist MoveOn.org which provided muscle to marshal the venom of the illicit drug culture online.

Despite Soros' best efforts, John Kerry proved to be a weak presidential candidate and lost to George W Bush.  With conviction Soros used the next three years to construct his change America machine and the determination to organize this army of disgruntled drug users.  The only thing left was to find a radical charismatic candidate who could blow smoke...which he did indeed.

At first, like many, I felt that Hillary Clinton would be the Democratic Party candidate of choice.  That was until I discovered that Barack Obama had penned a book and proclaimed with bravado that he was part of the drug culture and an alumnus of the illicit drug use fraternity.  Barack Obama boasted that he was not a lightweight like President Bill Clinton, who claimed that he "never inhaled."  He was a sage -- an accomplished drug user who bragged about consuming cocaine and marijuana.  At once I knew that the drug culture (media included) would worship Barack Obama with the same reverence that they paid Tommy Chong.  That they would elevate Barack Obama to celebrity rock star status.  That they would protect him and bequeath praise upon him, and assuredly, the very thought that an alumni of the drug use fraternity could become President of the United States would certainly send a thrill up a journalist's leg!  Therefore, an investigation of Barack Obama's background would be unnecessary and unwise.

It is truly unfortunate that hardworking, law-abiding people, Democrats included, suffer the consequence of what happens when the unlawful become the leaders and providers of news.  We are all damaged by the lies, cover-ups, and corruption.  We deserve better.