Warning: mysqli_free_result() expects parameter 1 to be mysqli_result, bool given in /var/www/html/americanthinker/admin/common/functions/func.general.php on line 126
 Your Universal Service Fee at Work - American Thinker
|

Your Universal Service Fee at Work

That Universal Service Fee we pay as part of our phone bill each month has helped double the number of "free Obamaphones" in the hands of people in Ohio since last year to more than 1 million.  While the mainstream media has ignored this story, the Ohio press is covering it.  Maybe interest in the You Tube rant of the now infampus Obamaphone Lady, now at 2.2 million views in three days, will help get out the story of how this program skyrocketed in a key swing state.   Then there is the issue of  the dubious ethics of having private businesses both actively promote a government welfare program and name it after an elected figure in their marketing materials

From the Dayton Ohio Daily News.

Growth could cost everyone who owns a phone. The program is funded through the "Universal Service Fund" charge on phone bills - usually a dollar or two per bill - and the amount of the fee is determined by the cost of this and other programs.

A growth of $100 million in this program could result in an increased fee of a few cents on the average bill, according to officials from the agency that administers the program. The total cost of the program nationwide was $1.5 billion in 2011, up from $1.1 billion in 2010.

Growth in the program is fed by the 2008 decision to extend it to prepaid cellphone companies, which get up to $10 every month that someone is subscribed. The number of cellphone companies offering the service in Ohio grew from four in 2011 to nine currently, with seven more awaiting approval from the Public Utilities Commission of Ohio.

The left is freaking out over this.  In addition to maintaining it is racist to show a black person making a fool of herself they are screaming to high heaven that the program began under Ronald Reagan. That is true, but they fail to note that in the 1980s it was proposed as a very limited program to provide land line service to those who could show both financial need and a reason they needed a phone, such as medical conditions that would require them to call emergency services.  As is common, once in place the program expended until by 2008 some 7.1 million were enrolled.  Then in  2008 it was revised to include cell phones and actively marketed by cell phone providers to people on a variety of government assistance program regardless of need. Today 12.5 million free phone accounts exist.

It's the active marketing of this program by cell phone providers that is most problematical.  In The Shady Ethics of 'The Obama Phone' Timothy Dalrymple writes:

Imagine, for instance, that it were the government itself that advertised the phones as Obama phones, starting in 2009.  This would be, at the very least, deeply misleading.  It would be taking credit for a program begun under predecessors.  It would be similar to President Bush in his first term, if he had come to office after Clinton initiated a program that gave free cars to welfare recipients, seeking electoral advantage by advertising them as "Bush cars."

But clearly (?) that's not the case here, right?  A visit to FreeGovernmentCellPhones.net - which calls itself "a small publishing company and the authority on the U.S. government's Lifeline Assistance program as it applies to mobile phones" - decries the "false rumor" of Obama Phones, which it calls an "incorrect term" because the cell phone program began several months before Obama's election.  Case closed.

Or maybe not.  Visit ObamaPhone.net and here's what you see (I suspect they'll make changes soon, if they haven't already, so I took a screenshot): 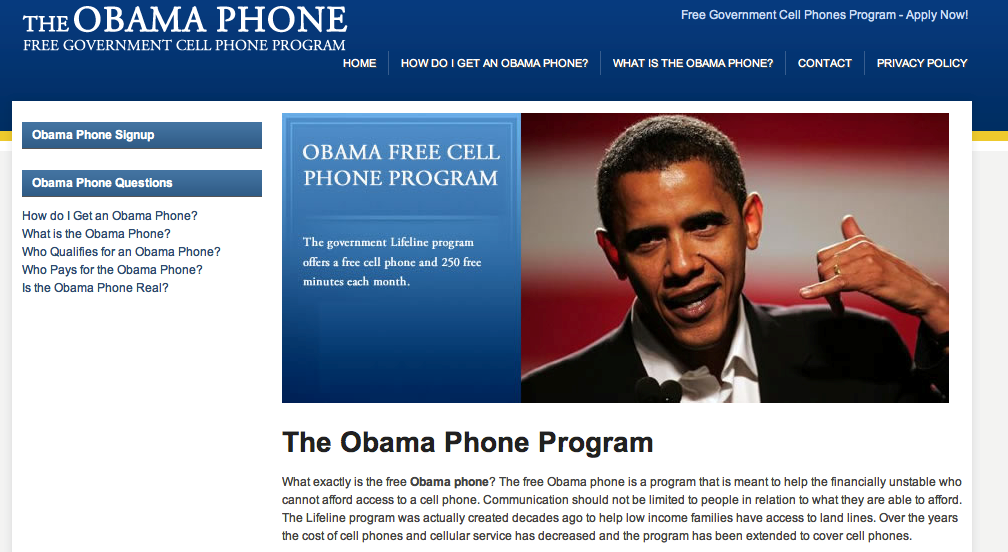 It gets even more interesting.

When you click the link at ObamaPhone.net to apply for a free cell phone, you're redirected to...wait for it...FreeGovernmentCellPhones.net.  That's right.  The same website that decried the "false rumor" and "incorrect term" of The Obama Phone Program has another website, surely desired to attract search engine traffic, that advertises The Obama Phone Program.  Nice.

UPDATE: The website has already been changed!  Visit Obamaphone.net now, and you'll get something like a blog with no pictures of Obama, as though they're in the process of dismantling the site.  But surely there's nothing to see here, folks!  Let's talk about Mitt Romney's tax forms!

That the administration did this isn't surprising, It's long been the Chicago way to put the mayor's name on everything from the Welcome sign at the city limits to the trucks that pick up the garbage.  I think they'd change the name of the airport with each administration if they could.  What is surprising is the complete lack of interest not only in why at least one key state is now awash with taxpayer paid cellphones but who paid for the extensive web marketing of this program.  As Dalrymple notes:

Who funds the companies like FreeGovernmentCellPhones.net and ObamaPhone.net?  Did they begin calling it "the Obama Phone" before or after the rumors of Obama phones began to spread through email?  Do they have a profit-share arrangement with the wireless telecoms that receive money (albeit indirectly) from the government to distribute free cell phones?  Are they paid by the federal government to help spread the word about the free cell phone service program?

Just how extensively has this program been marketed?  Here is how one multimillionaire Democrat Senate from a swing state reports how she became a critic of the program.

Sen. Claire McCaskill, D-Mo., received a mailed solicitation last year informing her she was eligible for a phone, leading her to question the program.

"I am troubled by the expansive potential for the program to be abused," McCaskill wrote the FCC in December.