Warning: mysqli_free_result() expects parameter 1 to be mysqli_result, bool given in /var/www/html/americanthinker/admin/common/functions/func.general.php on line 126
 Will Ordinary Dems Ever Say 'Enough'? - American Thinker
|

Will Ordinary Dems Ever Say 'Enough'?

I have a lot of liberal friends.  I know they disagree with Republican principles and proposals -- profoundly disagree.  That's fine.  They are decent, big-hearted, smart people.  They love our country.  I'm proud to have them as friends.  There are many problems that face our nation that should not be partisan.

So when will they say "Enough" to President Obama?

Will I ever hear them say things like what's below?  For example:

I want honest talk when our embassies are overrun and our ambassador and others murdered -- not nonsense that it had "nothing to do with the United States," 9/11, the killing of bin Laden, the Muslim Brotherhood, and al-Qaeda.  I don't want to hear about how "it is in response not to U.S. policy, not to, obviously, the administration, not to the American people. It is in response to a video -- a film."  Do not tell me that it was a spontaneous riot caused by an obscure YouTube posting from last June.  Please.  We are really not that stupid.

I don't want one more lecture on Islam as a religion of peace and tolerance.  Your job is to protect our country from the jihadis, not interfaith outreach.

Why is our national security being limited to drone strikes?  What about the need for intelligence?  If we still had a functioning intelligence capability, wouldn't we have known about the planning of the attacks in Cairo and Libya?

I want free speech -- it is not okay that a man who posts something obnoxious on YouTube was carted  off by federal agents in the middle of the night. 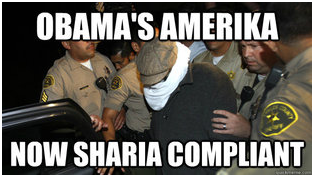 I don't want my president to meet with Letterman and Beyoncé and refuse to meet with Prime Minister Bibi Netanyahu.  It is a dereliction of your responsibilities.  It is unbefitting and disrespectful to the office of president.  Israel is facing the looming threat of a nuclear Holocaust from Iran.  What on Earth are you doing choosing Letterman over your job as president?

I don't want my president to hold a fundraiser in Las Vegas instead of staying in Washington when there are anti-American riots in 21 Muslim countries across the globe.

I don't want my president to tell me that the Muslim Brotherhood are moderates, when their motto is "Jihad is our way.  Dying in the way of Allah is our highest hope."

I don't want my president to not protect our embassies on 9/11.

I don't want a president who fought against sanctions on Iran in Congress, then gutted them with hundreds of exemptions, including oil for China, and claims that that's all he has to do to deal with the threat of a nuclear Iran.

I want a president to attend his national security meetings each day in person so he can ask questions and discuss options, instead of half the time skipping the meeting and reading a brief summary.

Will my Democrat friends ever hold Obama accountable on the economy?  Republicans were revolted by Bush's overspending, and they created the Tea Party to insist on fiscal responsibility.  Where are the rebels in the Democrat party?  Will they ever say any of what follows?

I want a president who works with his own party and submits a budget to Congress, as required by law.

I want the president to take the debt seriously.

I want to hear how you're going to save Medicaid and Social Security from going bankrupt.  People rely on those programs.  We can't afford for them to fail while you are milking them for votes.

Don't lie to me that "taxing the rich" is going to pay for your yearly trillion-dollar overruns.

Stop printing money to finance our crushing debt burden.  You are jacking up oil prices and the price of everything that is transported.  You are killing the middle class every time they fill up their cars or buy groceries.  You have doubled the price of gas.  Enough.  Stop spending money we don't have.

Twenty-three million Americans don't have work.  Fewer people are working now than when you took office.  The recession and banking crisis ended in 2009.  Mr. President, what policies did you put into place to stimulate the private sector, and where are the results?  Any new ideas other than attacking the rich?

My friends are silent, which leaves me with nothing but questions.  Where is their sense of holding Obama responsible -- for anything?  Where is there sense of what is creepy behavior by a president?  Obama has time for The Pimp with a Limp, but not for  national security briefings?  Where is their sense of our constitutional rights and protections?  A citizen is carted off by federal agents for posting something on YouTube, and they are silent?  Why aren't they crying like Clint Eastwood when 23 million fellow Americans are out of work?  How can they want four more years of the same?

This is not what they voted for.  They voted for something much better.  Is there any broken promise, any failure, any lie, any flouting the law, any dereliction of duty, any divisive political tactic that would make them say "Enough"?

The author was a Peace Corps Volunteer who served in Senegal, a clinical social worker and psychotherapist, and a mystery author whose novels highlighted the wildlife and peoples of Kenya.  She currently writes for American Thinker.