Why the Left Hates the Laffer Curve

By Andrew A. Morgan

For those who are familiar with the "Laffer Curve," the name generally brings on an immediate and politically charged opinion related to the inherent implications the curve has historically had on the topic of the government's tax rate policies.  However, the underlying points illustrated by the curve deserve serious and independent consideration.  In fact, to evaluate the Laffer Curve without bias will undoubtedly yield a better understanding of one of the key political issues facing America today.

The name "Laffer Curve" originated in 1974 and was given by a writer for the Wall Street Journal in honor of Arthur Laffer, an economist who later served on President Ronald Reagan's Economic Policy Advisory Board.  It was originally used as part of the argument against the tax increases Gerald Ford was contemplating with an aim to reduce the federal deficit.  But the concept was not at all new.  The nonlinear relationship between tax rates and government revenues depicted in the curve is something that has been discussed and written about for at least several centuries.  In fact, Laffer explains that he himself learned of the concept from reading works by other economists, including Keynes.

Simply stated, the "Laffer Curve" is a theoretical curve showing the relationship between an applied income tax rate and the resulting government revenue.  Generally, the tax revenue is indicated on the vertical "y" axis and the tax rate on the horizontal "x" axis.  The fundamental concepts are as follows:

With this basic outline understood, the critical matters of the slope (or shape) of the curve and the questions of the rate at which it peaks and at which it declines naturally come next.  This is where the disputes come into play. 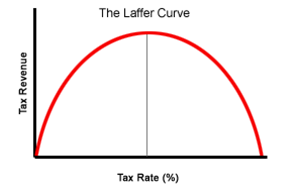 The disagreements are obviously in the details.  Conservatives arguing for reduced or limited tax rates point to the Laffer Curve to support their arguments.  Because of this, liberals have gone to considerable lengths to discredit the concept of the curve.  Many liberal politicians have also sought to discredit the concept because when it comes to determining appropriate tax rates, their ideology elevates the consideration of "economic fairness" above that of an objective cost-benefit analysis.  In their view, the concept of achieving what they see as fairness through progressive or redistributive tax policy trumps the risks to the overall economy indicated by the shape of the curve.  Conversely, many conservative politicians have sought to exploit the curve without much concern for the accuracy involved because when it comes to determining appropriate tax rates, their ideology elevates the principle of limited government above that of a concern for maximizing government revenue.  In their view, maximizing government revenue is not the goal.  So in most cases, those who have made use of the concept of the Laffer Curve have either omitted or distorted the details to suit their own arguments.

If you try to look up the Laffer Curve, you'll see various things.  A quick web search will bring you visuals showing curves of varying slopes, shapes, peak tax rates, etc.  Some economists have concluded that the peak occurs at an effective tax rate as low as 15%, some at 70%.  But these numbers and curves almost never specify a representation of a particular tax or tax bracket.  They are generated primarily by people with a personal political interest in the impression created and without a primary concern for accuracy and validity.

Once the political rhetoric is peeled away, some basic facts remain.  There is a relationship between rates of taxation and government returns.  Earnings and profits which are taken from the people, investors, and the private business sector do represent a reduction in both financial fuel and worker incentive.  These are truths.  The difficulty is in determining which part of the curve you are on at any given time.

The more money taken from a company, the less it has to invest or to pay its employees, and the more likely it becomes that the company will seek to protect its capital from taxation or consider outsourcing costly parts of its operation or relocating part or all of its operations to a country with lower tax rates.  In the case of capital gains, the more profit is taken from an investor who risked his (or her) own capital, the less inclined he will be to risk further capital.  The more money taken from a worker's paycheck, the less money there is for his personal budget and savings.  As the amount of money withheld from the worker's paycheck increases, the benefit this worker gains from his efforts proportionally diminishes -- and with it his incentive to work.  At certain tax rates, these reductions are not effectively problematic.  But for each tax, there is a threshold rate above which these reductions become problematic for both the private economy and for the government's bottom line.

The factors that go into determining where you are on the curve are many.  And this is where politicians and pundits generally rely on the fact that the overwhelming majority of the citizenry do not have the knowledge, understanding, patience, or inclination to dig into the details.  In truth, most of them don't.

The curves for these different taxes and tax rates will begin and end at the same place.  But the area between the slope and point of diminishing return is certainly not the same.  Secondly, the economic climate at any given point in time introduces countless variables such as the general economic growth rate, banking practices, loan interest rates, employment rates, consumer confidence, inflation rates and many others, all of which contribute to the shape of the curve.  The curve is not the same for the same tax at different points in time because economic conditions are constantly shifting.  Thirdly, it is impossible to quantitatively "measure" the relationship with any exactness because of the inherent time lag involved between changes to the tax rate and the resulting impact on government revenue.  Other factors always come into play during this lag period and to some degree contribute to the resulting government revenue.

A fair examination of the current income and corporate and capital gains tax rates require a detailed examination of the current tax rates along with the historical record related to changes in rates and government revenues.  Examining our current data or past data also requires that economic context be considered.  This is where it becomes very complicated.  And because it involves so many interrelated variables, politicians and pundits are always able to find select data to support their argument.

But under all of the political banter, finger-pointing, and hyperbole, the curve does exist.  At any given point in time (including right now), changes to a given tax rate in either direction will produce a result.  Government revenue may increase.  If it happens near the crest of the curve, it may produce little or no change in revenue.  Government revenue may decline.

Assuming that the goal is to achieve maximum government revenue without reaching experiencing significant economic harm caused by excessive taxation, it might seem at first that the ideal scenario would be for tax rates to be at the maximum on the curve.  However, a more careful examination indicates otherwise.  One critical consideration is that the potential for negative consequences to both the private sector and the government's revenue is not equal on each side of the curve.  On the curve's ascent, where tax rates are lower than the point at which revenues peak, the downside risk is for inadequate revenue to the government, which will deprive it of spending money on potentially anything upon which the government spends money.  However, on the curve's descent, where tax rates are higher than the point at which revenues peak, the downside risk is not only for inadequate government revenue, but also for diminished private investment, decreased entrepreneurial and corporate investment, decreased workforce motivation, and increased corporate outsourcing.

Bearing this in mind, common sense would seem to dictate that our goal should always be to have tax rates which keep us on the ascent, or left side of the peak. Once over that crest, the dangers become much more numerous.  Furthermore, because ever-changing exterior economic circumstances cause the curve to change over time and might result in an unchanging ascent-side tax rate becoming a descent-side tax rate, we can conclude that the ideal tax rate is one which generates government revenue relatively high up on the ascent side of the curve, without ever quite reaching the peak where government revenues flatten or begin to diminish.