Warning: mysqli_free_result() expects parameter 1 to be mysqli_result, bool given in /var/www/html/americanthinker/admin/common/functions/func.general.php on line 126
 Why Blame Obama? - American Thinker
|

Let me count the ways.

Before inauguration.  Senator Obama voted for the budgets he would later blame on Bush, and for the TARP bailout.  After just two months of TARP, the Bush administration said it was done -- crisis averted.  In fact, President Bush was done after using about $270 billion of the $350 B that was authorized by Congress.  But as a courtesy to the incoming president, Bush would request the second $350B from Congress if President-Elect Obama asked for it.

President-Elect Obama asked for it, and he got it.  Tim Geithner, who could not do his own taxes and who, as a regulator, did nothing about the Libor scandal, would have all $700B to play with.

We usually call TARP a "bank bailout," but the banks are paying back every cent lent to them.  In fact, the part of TARP that went to banks is expected to return $3B to taxpayers.  And most of that was paid back quickly.  The "cost" of the "bank bailout" was less than zero!

The real bailouts.  When the dust clears, the CBO expects TARP to cost taxpayers $32B.  Who got that money if banks didn't?  General Motors, Chrysler, and "mortgage programs."  But GM and Chrysler went bankrupt anyway.

The U.S. auto industry was not "saved."  Going bankrupt does not have to mean going out of business.  See, for example, Delta Airlines.  It went bankrupt in the usual, lawful way and is operating today.  On the other hand, GM could be heading into bankruptcy again, post-bailout.  Oh, and since the bailout, "GM has increased its manufacturing capacity in China by 55 percent."

The government auto takeovers did not prevent bankruptcies.  What they prevented was the usual rule of bankruptcy law.  Instead of paying back creditors in a predictable and lawful way, the federal government simply robbed bondholders and non-UAW workers and retirees (especially at Delphi) and delivered sweet, sweet payback to the union bosses of the UAW.

The effect goes beyond the direct costs to taxpayers and specific investors and employees.  Who would make investments or long-term decisions with this kind of rule-of-man uncertainty and ascendant cronyism?

The Stimulus.  Obama sold the stimulus this way: it would keep the unemployment rate from going above 8%, the jobs were shovel-ready, and it would cost $787B.

Since the Stimulus was passed three and half years ago, the unemployment rate has not gone below 8%.  President Obama himself said, "Shovel-ready was not as shovel-ready as we expected."  And the Congressional Budget Office "estimates that the legislation will increase budget deficits by about $831 billion over the 2009-2019 period."  The stimulus stimulated nothing but our debt problem.

Spending overall.  Obama requested $350B of TARP before his inauguration.  Within weeks of inauguration, his $831-B "Stimulus" was passed.  And within days of that, he signed a $410-B Omnibus spending bill.

The Omnibus bill and much of the Stimulus and TARP spending occurred in FY 2009, a year that Democrats always try to pin on Bush.  Every dime spent in both FY 2008 and FY 2009 was due to budgets written by a Democrat-led Congress.  And President Obama reigned for the majority of FY 2009.  Democrats own FY 2009.

The result was that federal government spending shot up like a rocket in 2009, to levels unprecedented in peacetime, and stayed there.  In every year of Obama's four years in office, federal spending was above 24% of GDP.  Prior to Obama, it had not reached that level in even one year since World War II.

Compare federal spending in Obama's first four years to the four years that just preceded them: Obama's 24.4% of GDP compared to Bush's 20.1% of GDP.  In today's dollars, that is almost $700B -- every year.

Obama did not let the financial crisis go to waste.  He permanently grew the federal government under the guise of addressing a short-term problem.

Taxing.  Obama gets a bit of a bad rap on taxes.  Outside ObamaCare (discussed below), he hasn't really raised taxes.  OK, he raised the cigarette tax his first month in office.  And he's always wanting to raise taxes on "the rich," but he hasn't pulled that off just yet.  In fact, he's generally cut taxes.  But look at the way he does that.

Remember the big tax fight at the end of 2010, when Republicans simply wanted to keep the Bush tax rates in place?  The Republican plan was scored as adding $544B to the 10-year deficit since those rates were scheduled to increase.  Democrats, being so concerned about deficits suddenly, argued that that was too much.  They wanted to let tax rates increase on higher incomes.

So here's how they all compromised: they kept all those tax rates in place and added yet more tax cuts to make the total bill $858B.  The "compromise" was bigger deficits than either party originally proposed.  Here were the tax cuts and credits added by Democrats.  (By the way, a "credit" is considered a "tax cut" even if you had no taxes to cut and the government sent you a check.)

Let me tell you all the ways that was bad.

(1) These extra cuts and credits increased the deficit -- even more than simply doing what the Republicans had asked for, 60% more.

(2) When the goal should be to simplify the tax code, these made it incredibly more complex.

(3) When the goal should be to reduce the progressivity of the most progressive tax system in the developed world, these made it more progressive.

(4) These cuts and credits were "targeted" rather than broad-based.  Politicians picked who the winners and losers were.

(5) The U.S. tax code became a temporary, two-years-at-a-time, made-up-as-we-go-along system.  No one can make long-term financial decisions (investing, buying a house, hiring) based on the U.S. tax system.

(6) The changes did absolutely nothing to address the fact that the U.S. has the highest corporate tax in the developed world, which incentivizes U.S. businesses to move and hire overseas.

(7) The payroll tax cuts put the already shaky entitlements of Social Security and Medicare in even more precarious positions.

Debt.  All you need to know about the federal debt and Obama's plan to deal with it is contained in this chart from his own FY 2013 budget. 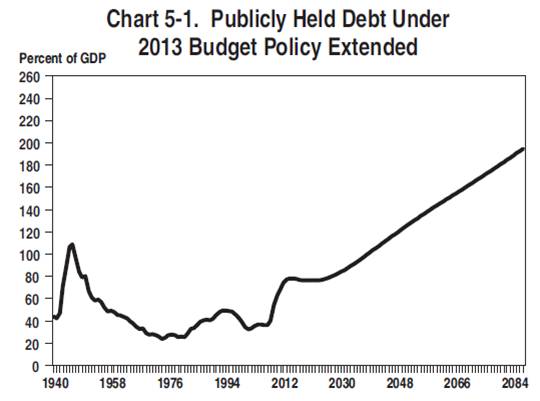 Then Democrats won both the House and Senate.  Democrats wrote the budgets for FY 2008 and '09, and then maintained those gains with continuing resolutions ever since (not real budgets).  From 2007 to 2012, federal debt held by the public more than doubled as a fraction of GDP!  See that sharp rise up in the chart in those years?

Over half a century of reasonably responsible fiscal policy was wiped out in one president's term.

Now look at the chart and see what comes after 2012.  First is a little one-decade flat period manufactured by Timothy Geithner's outlandish assumptions like real GDP growth over 4% from 2014 through 2017.  After Geithner's make-believe 10-year window, we're off to the races.  Our public debt goes through all levels seen by Spain, Greece, etc. and, in fact, off to infinity.  It never even levels off, much less declines.

And this is Obama's plan.  This chart is the best his guys could come up with, even making all the bogus assumptions they could possibly invent.  His "plan" is little more than running up the most expensive restaurant bill in history and then skipping out on the check.

So why does the CBO say that ObamaCare would reduce the deficit and repealing it would increase the deficit?  Because Obamacare also cuts $711B from Medicare and raises yet more taxes by $569B over the ten years of 2013-2022.

In round numbers (because the time periods don't match exactly), ObamaCare really costs about $1.7 trillion, but it also raises taxes by about $1.1 trillion (oops, I guess Obama did raise taxes), and it cuts Medicare over $700 billion.  The CBO says.

Energy and regulation.  You might think the above litany would be enough.  But Obama wasn't finished.

Question for the reader: if you were to pivot and focus on jobs like a laser, would you flood the country with new job-killing regulations as fast as your czars could create them?

I close with a quote.

"If the president loses in 2012, we will lose too, and the country will once again be in the hands of rightwing extremism. There is no option to the left of President Obama." -Sam Webb, chair of the Communist Party USA, addressing the party in 2010.