I detect some confusion in the electorate regarding jobs numbers.  Obama claims he created 4.5 million private-sector jobs.  His critics claim he lost 4 million.  Are we better off than four years ago?  Fact-checkers, shockingly, aren't helping us sort this out very well.  So let me try.

Usually, the numbers you hear are technically correct -- they would pass a raw fact check.  But the numbers are not comparable apples-to-apples and not necessarily meaningful.  It all depends on your starting point and what you are really comparing.

Look at this chart, which is the total number of private sector jobs over the last five years. 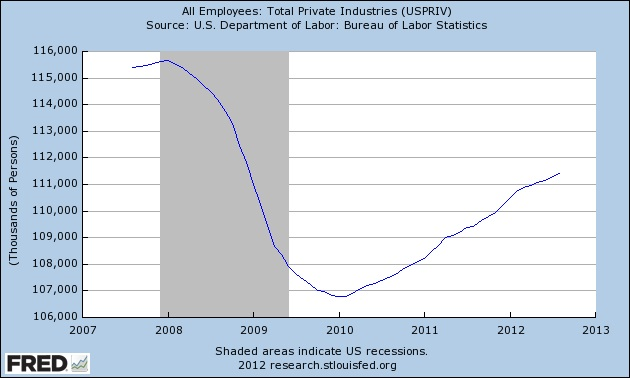 Your choice of starting point obviously makes a big difference, since the economy lost 8.9 million private-sector jobs in two years.  The table below shows the various answers you would get, depending on how you define things.

It shouldn't take a genius to figure out why the White House likes to count (a) private-sector jobs and (b) only since hitting bottom in February 2010 (the "last 30 months," at this point).  That is the largest positive number in the above table.  It's as simple as that.

Obama uses a cute trick: if you start counting from only once things started getting better, then things got better.  And things always got better at some point after every U.S. recession in history.

What is "right"?  That's a very good question.  I always prefer to compare apples to apples.  How does Obama's recovery compare to other recoveries?

Let's give Obama the benefit of the doubt and start counting at the low point in private-sector jobs. After all, that is how he is doing it.  How does his 30-month-post-trough pace compare to other recessions?

In my opinion, the right-most column represents the fairest comparison.  We are using the same measure Obama uses: private-sector job increases over the 30 months from the low point associated with a recession. And since the number of total private jobs varied from 37 to 115 million over those years, a percentage change is a more fair comparison than absolute numbers.

So how does Obama stack up against other recession-recovery presidents? The worst except for Jimmy Carter.  That's because, in Carter's case, a second recession started within that 30-month window.

(In Jimmy's defense, he holds the all-time record for private-sector jobs created within any 30-month window: 8.7 million in his first 30 months in office.  That is even better than Reagan's 8.3 million after his tax cut in 1983.  The best 30-month window under Clinton was 7.3 million.  Obama is bragging about a number that is barely half of Carter's.)

Even in absolute numbers, Obama's 4.6 million is worse than the recoveries under Bush 43, Bush 41, Reagan, Ford, Nixon, and Truman.

There is a reason this is called the worst "recovery" in history.  And, by the way, we haven't recovered yet.

Since World War II, we have averaged a recession about every 6 years (in fact, every 69 months).  If you define "complete recovery" as exceeding the number of private-sector jobs prior to the recession, we have "completely recovered" from all post-war recessions except one -- this one.

In all post-war recessions prior to 1990, private-sector jobs recovered within 27 months or less of the pre-recession peak.  The two Bush recoveries took longer: 36 and 54 months, respectively.  In Obama's case, we are 55 months away from the pre-recession peak in private-sector jobs, and counting.  And we have another 4.2 million jobs to go!  At the current pace, it will take 82 months to "completely recover."

As you can see in the chart below, most recessions form a "V" in terms of private sector jobs. That is, the jobs came back about as quickly as they went away. In 9 of the 10 previous pre-war recessions, private jobs had completely recovered within 14 months of bottoming out. In the 10th recession (Bush 43's recovery), complete recovery was 23 months post-trough. 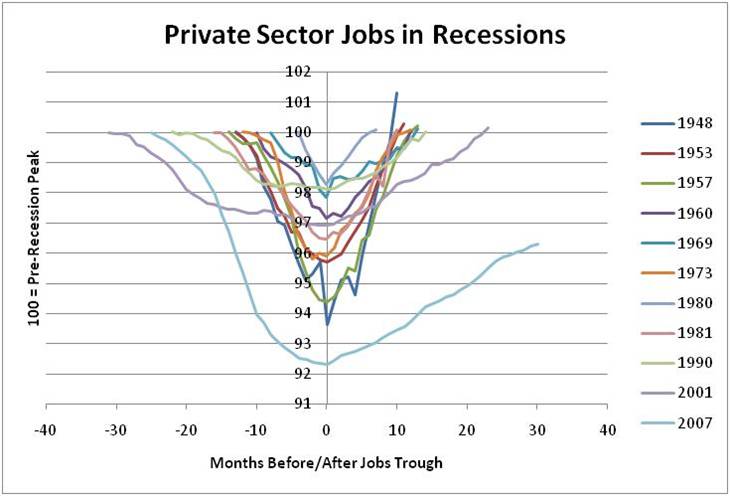 But look at the last recession in this chart, Obama's recovery. It is the only one that is not roughly symmetric. The recovery is much slower than the decline. We're at 30 months post-trough, and nowhere near complete recovery. The pace of this recovery is the slowest of all post-war recessions.

At our current pace, we should be completely recovered by the end of 2014.  If so, that would be the longest time to recover from a recession in our history.  And that's if we're lucky.  The last recession started in December 2007.  If averages hold up, the next one will start in 2013.

It's possible, even likely, that this will be the first time in history that another recession starts before private-sector jobs completely recover from the last.

(Related: "The Truth About the Unemployment Rate in 2 Graphs")