Warning: mysqli_free_result() expects parameter 1 to be mysqli_result, bool given in /var/www/html/americanthinker/admin/common/functions/func.general.php on line 126
 The Dogs of 9/11 - American Thinker
|

As the years pass and memories fade, it becomes easy to relegate 9/11 to the history books.  It's been eleven years since that awful day, when three thousand Americans lost their lives.  American Thinker decided to honor those who have not received much recognition -- the rescue and cadaver dogs, as well as their handlers -- by interviewing a few who worked through the debris at the Pentagon and World Trade Center (WTC).

Nona Kilgore Bauer wrote in her book, Dog Heroes of September 11th: A Tribute to America's Search and Rescue Dogs, "Without their contribution hundreds of victims' families would not have found the peace that comes with the return of a family member or beloved friend."  These animals and people worked tirelessly at first to find survivors, but ultimately, they found just human remains that helped families find closure.

Throughout the book there are excerpts from the handlers that described the atmosphere as smoldering debris with deep odors, smoke, dust, and noise, having to face death all around.  Bauer told American Thinker, "I realized these dogs were not recognized even though they were such an important part of the search and rescue effort.  America needs to know that these were brave, brave people and animals that were truly heroes.  The dogs are not working to be heroes -- just doing the job they were taught to do.  However, the fact is what they found was extremely important, which makes both dogs and handlers heroes to me." 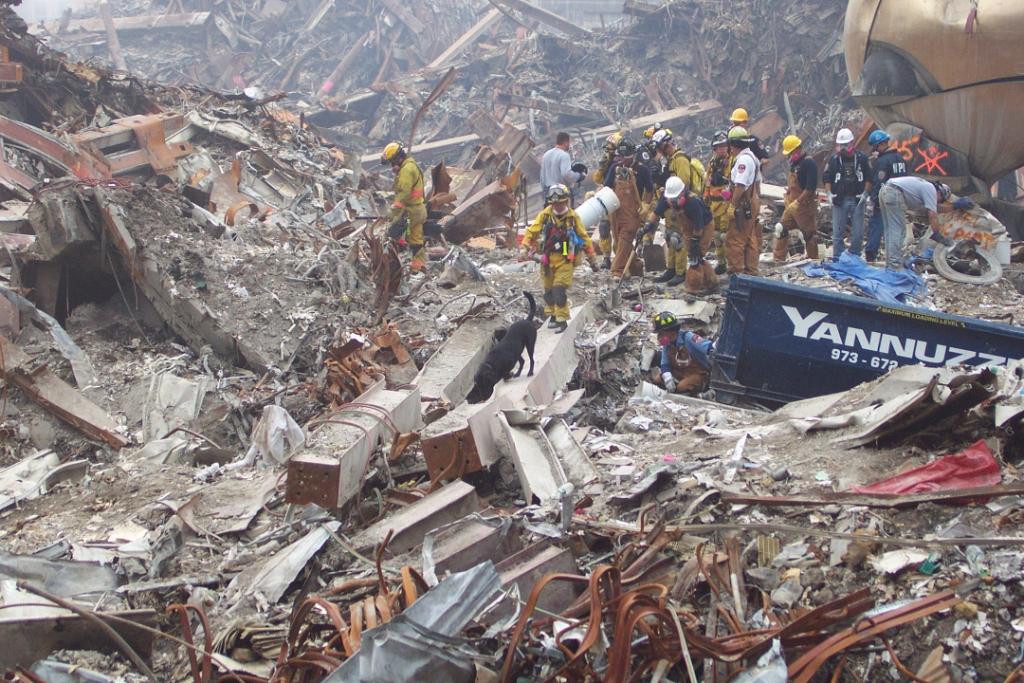 Bauer felt that the Pentagon search was a lot more organized, partly due to all the restrictions.  At the Pentagon, it was quickly determined that cadaver dogs were needed as opposed to the "live-find" dogs used at the WTC.  They also quickly decided to put Officer Jim Lugaila from the D.C. Metropolitan Police Department in charge.  He has been a canine handler since 1988 and prefers German Shepherds because of their versatility, intelligence, stamina, and athleticism.

He described to American Thinker the atmosphere at the Pentagon: "I told the FBI, who was in charge, that they were missing a lot with their hand-sorting since cadaver dogs could find human remains the size of a dime or less for DNA purposes.  I was given the job of canine commander after proving the dogs' worth.  King, my German Shepherd that looked like Rin Tin Tin, came across a piece of metal that looked like a pizza pan folded in half.  King went crazy.  After recovering it and opening it up, a piece of a human brain was found inside.  Unfortunately, non-dog people don't believe in the dog until you prove to them that the dogs can recover more."

What he implemented was teams that mostly worked eight- to ten-hour shifts, twenty minutes on, twenty minutes off.  He wants Americans to understand that the dog handlers were mainly volunteers who would come to help after working a full day.  What was learned from this experience was that animal decontamination is very important.  Lugaila implemented procedures so that after the dogs were done searching, they would be watered down and taken to a park area where the handler and the dog could cool off.  The dogs were washed and visited by a vet tech for a medical exam.

Jim minced no words when he was asked to describe the situation.  "Think of taking a giant blender, filling it with pieces of ceiling, metal, pieces of flesh, pieces of clothing, paper, glass, and putting it on the highest speed possible.  That is what we had to sort through to find something sometimes no bigger than a dime."

Heather Roche heads the Bay Area Recovery Canines (BARC) and was part of the Pentagon search team.  She wants Americans to understand that there is a difference between "live find" dogs and cadaver dogs.  Live find dogs are trained with interactive games such as hide and seek, while cadaver dogs are trained to compare odors.  She noted, "The dogs use their noses, not sight, to achieve their finds and are much more successful than any human could be.  After the dogs make a find, they bark, lie down at the source, and box it it in with their body." 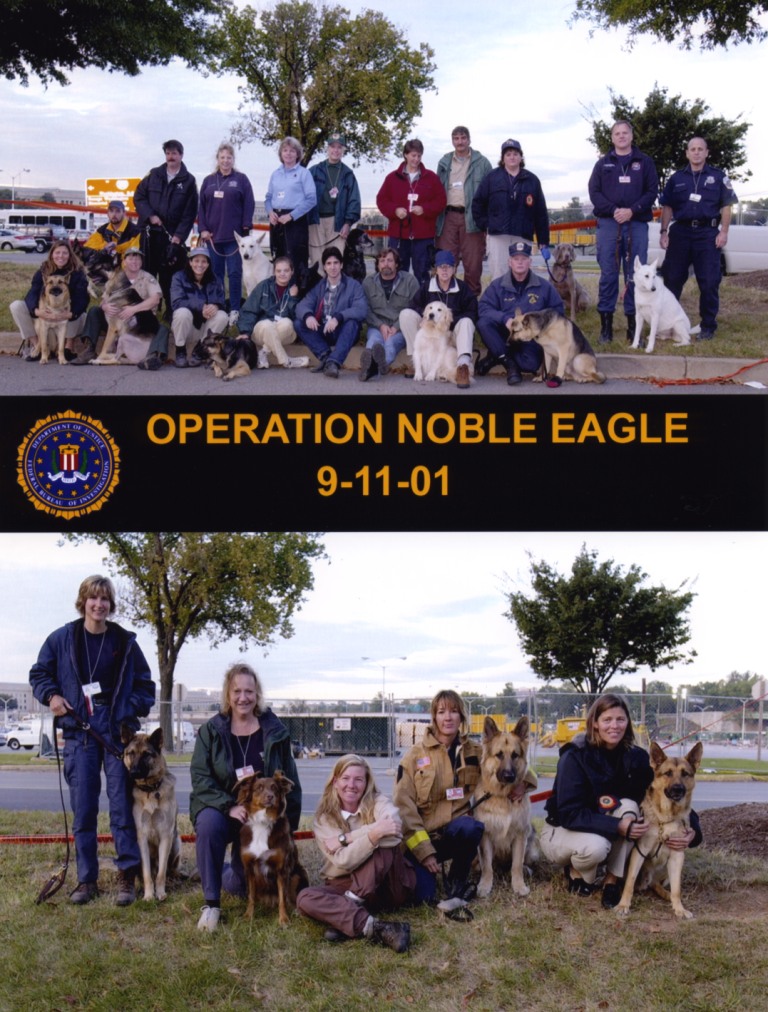 She takes what happened at the Pentagon personally since her dad, the secretary of the Air Force on 9/11, was present.  Although she was one of the lucky ones whose loved one was unhurt, she felt a personal connection because of her dad.  "I found it rewarding when my dog Alley, a Labrador Retriever, found someone because that helped families with closure.  I could not stop the bad things that happened, but at least I can bring closure."

Debra Tosch, currently the executive director of the National Disaster Search Dog Foundation, searched at the WTC with her dog Abby, a Labrador Retriever.  What Debra likes to emphasize is that out of the despair and ruins of 9/11, there were lessons to be learned which would help in future disasters.  Currently her organization is building a national training center in Southern California.  The lessons learned from 9/11 will be incorporated into the training: how deep to bury objects to be found, how to make sure the dogs are able to identify someone underneath the rubble with hundreds of people around, understanding how heat is transferred through burning metal, and identifying the different odors of humans.  "Humans smell differently from how other animals do, and a dead human smells different from how a live one does.  Sex, race, religion does not matter.  Everyone has a similar scent."

Besides finding pieces of bodies, the dogs served another purpose: therapy.  Debra tells the sad story of how hard it was to see the emotions of the firefighters who lost their brothers.  "When someone was found, work would stop, and I watched as the tears rolled down the firefighters' faces.  I remember one firefighter who hugged Abby and buried his face in her neck after just finding out a fellow firefighter was found."

Heather wants Americans to remember that the 9/11 story is not about the dogs, but rather, "[i]t is about the victims of 9/11.  The dogs do a great service, but they are just doing what they are trained to do.  The heroes are those that risk their lives and have lost their lives: the 9/11 victims.  I also think of those who were there at the two main sites where they did run into the flames and chaos to pull out the living and the hurt, as it was all unfolding.  They are the heroes, not my dogs.  I am proud of my dogs, but we aren't heroes."

Jim is proud that the dogs were credited with at least one-third recovery of the human remains.  A 9/11 family interviewed by American Thinker in the past never had their son, U.S. Navy 1st class Ronald Hemenway, identified.  It is believed that he is buried in a casket at Arlington Cemetery with the unidentified remains of four other victims.  Jim told American Thinker, "Dogs can find human remains that have been turned into ash.  However, currently there is no way to get the DNA from ash.  These five people were found but can't be identified because of the major fireball at the Pentagon.  I am sure that was the case in New York as well." 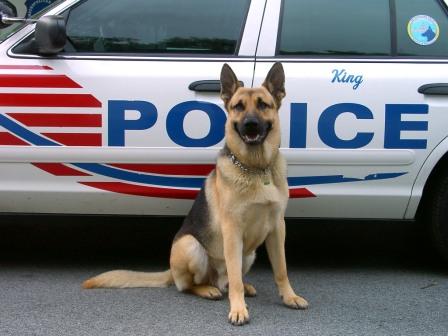 Have the finders' lives changed since experiencing the disaster of September 11th?  Heather lost Alley in 2008 to multiple myeloma, a rare blood disease.  She believes that it was due to Alley being exposed at the Pentagon.  She is currently training a puppy whom she named PENTA, in honor of the 9/11 victims, and whose registered name is Pentagon Remembrance.

Debra says she came away with a different outlook on life.  "After seeing something that overwhelming, piles of debris and the body parts, I decided not to be stressed out over the small things in life like being stuck in a California traffic jam."

Jim was affected like everyone else there -- "not then, while we were working, but later.  I don't like to go to commerative services.  Certain smells will trigger my memory.  I don't watch the anniversary shows.  It was a very emotional experience."

All want Americans never to forget that day.  They want the value of these service dogs to be recognized since the service performed is invaluable -- a large area can be covered in a short amount of time.  In addition, a dog's nose can find a minuscule piece of DNA for identification, which a human can never do.  Nona said it best: "From my perspective, the canine is G-d's greatest gift to mankind.  Although they did what they are trained to do, they are still amazing creatures."