Warning: mysqli_free_result() expects parameter 1 to be mysqli_result, bool given in /var/www/html/americanthinker/admin/common/functions/func.general.php on line 126
 So Obama Inherited a Mess, Did He? From Whom? - American Thinker
|

So Obama Inherited a Mess, Did He? From Whom?

For the past three and a half years, we have had to endure the nonstop whining of Barack Obama and his surrogates telling us over and over that he inherited the financial mess that required him to add trillions of dollars to the national debt, to run trillion-dollar-plus deficits for each year that he's been in office.

Now he is telling us that he needs another four years and trillions more in money borrowed from China to complete the clean-up of the mess he inherited.

Well, for once, he nearly has it right.  He inherited not simply a financial mess, but a historic financial disaster.  Even the most virulent anti-Obama partisans will admit that Barack Obama didn't directly create the 2007-2008 financial meltdown.

But Obama's own claims that it was all the fault of his predecessor, George W. Bush, sounded a little thin the first time he uttered them, while now they appear remarkably transparent.  The source of the financial crisis precedes Bush by a number of years, and like many landslides, it starts with a small pebble being dropped that starts the whole thing.

Looking backward through the historical record might help us decide just who provided Barack Obama with the financial legacy he has to cope with if it wasn't Bush.

In 2007-2008, the major financial institutions of Wall Street found themselves holding hundreds of billions of dollars in so-called derivatives.  And just what are derivatives?  Derivatives are similar to stock, in that they indicate ownership of a share of an underlying asset.  Usually, as we know, those shares represent partial ownership of a corporation.  The corporation is valued based on attendant physical assets such as land, buildings, inventory, and such as well as intangibles such as patents.  Toss in the value of the corporation's receivables (net of liabilities), and bingo! -- you have a value.  At least you have a value for a corporate shell, if not a going concern.  The value of the going concern, or market value, also reflects the value to investors of the skills of management, the financial strength of the corporation, and the profit that the shareholders expect to get as either dividends or capital appreciation if the market value of the shares of stock increase.

In the case of derivatives, the underlying asset is based on a bundle of mortgages that have been accumulated and collateralized as a unit.  Each bundle is assumed to be sound in that there are houses backing up each one as a physical asset, as well as a calculable amount of interest income from each mortgage.  Seems fairly simple, and pretty safe as well.  Not as flashy an investment as putting money into another Microsoft or Apple might be, but viewed as safe.  Stable.  Boring.

OK, maybe it didn't turn out to be so boring after all.

During the period preceding the financial meltdown, the rate of growth in new home sales accelerated sharply.  The following graph from the U.S. Census Bureau (which admittedly tracks only new home sales by month) shows that the rate of price increases was fairly stable from early 1973 through most of 1996 (green trend line).  Yes, prices rose, but at a steady, relatively predictable rate, which appears to be approximately 0.4% per month.

From 1996 through the middle of 2003 (orange trend line), this price appreciation seems to have accelerated to something approaching a rate of price increase of approximately 0.5%.

You might be asking yourself at this point, "0.4% or 0.5%.  What's the big deal?"  Well, that one-tenth-percentage-point increase in the rate of price increase is about a 20% faster rise in prices when you compare it to the prior period, which lasted 23 years.

Finally, in the period from mid-2003 through the first quarter of 2007 (red trend line), the rate of new house pricing grew at an even faster rate of approximately 0.65% per month.  Again, in isolation that doesn't sound like a horrendous number, but if you look at the graph again, it means that the average price of a new home increased nearly $100,000 in only four years.  In the final period before the housing bubble burst, the rate of growth in housing prices grew nearly 55% faster than that 23-year period of stable growth. 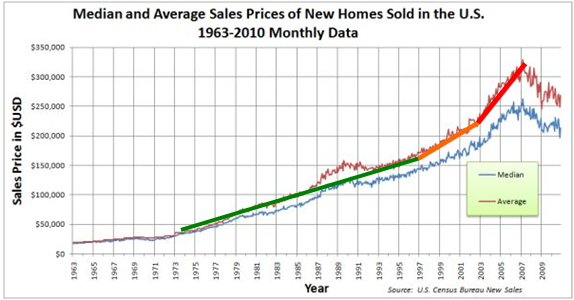 So what happened?  Well, when there is a significant acceleration in the growth of prices, most economists will tell you that there is probably inflation occurring, where too much money is trying to buy too few goods.

That seems like a pretty safe assumption, doesn't it?

But then the next question has to be, "Where did all that extra money come from?"

In 1995, Barack Obama was the lead attorney in an anti-discrimination lawsuit filed against Citibank for alleged "red-lining" practices which the plaintiffs claimed denied equal access to mortgage loans for African-Americans.

Claims of racial discrimination were frequently aimed at banks in the mid-1990s by community activists who, through judicial actions or by producing demonstrations by irate citizens, embarrassed banks into lowering their lending requirements to the point where, in common parlance, banks began issuing "sub-prime" mortgages.  In an effort to both protect the financial integrity of local community banks and provide access to enormous amounts of cash for mortgages, Congress instructed Fannie Mae and Freddie Mac to purchase such mortgages from the original lender, returning the original lender to his original state of liquidity.

Fannie and Freddie then offered institutions such as Lehman Brothers and other major Wall Street firms a chance to "bundle" these mortgages and sell derivative securities, with their value basis predicated on such bundles.

What everyone in this chain of perhaps well-intentioned decisions overlooked was the impact on housing prices when more and more money was made available to enter the market in search of fewer and fewer houses.  Yes, that's right: the housing market began to overheat, and the price of both new and existing homes started to climb.

The sub-prime market allowed people to borrow large sums for their mortgages with little money down, and that is a key factor in what followed.  Borrowers were offered adjustable-rate mortgages (ARM) that charged them far lower interest rates for the first few years of their mortgage, to ease their ability to secure the loan in the first place by lowering their monthly payment to be more in line with their actual income.  Neither lenders nor borrowers seemed particularly concerned about the two words that would help start the avalanche of collapse -- Adjustable Rate.

As the rate on ARMs was pushed upward (in accordance with the mortgage structure agreed to by each borrower), the mortgage payments for many borrowers rose to a level that they could barely support.

Making matters even worse, property taxes for states, counties, municipalities, school districts, and so on were all being adjusted upward to cash in on the (apparently) endless increases in home values that all that cheap mortgage money was causing.  Those taxes were added to the already higher basic mortgage payments, and they made the homeowner stretch his or her paycheck even further to cover all these costs.

But most borrowers felt that since their own homes would increase in value the longer they held onto them, they should keep trying to meet their obligations with a view toward "flipping" the property and making a profit if their ability to make their payments became impossible.

Like most economic bubbles, this belief exacerbated the problem.  Instead of selling out and at least walking away unharmed, buyers kept offering their homes at higher prices, assuming that since all housing prices were rising, their houses must be worth more as well.

Well, in late 2006-early 2007, prices started to tumble.  Homeowners began to find themselves "underwater," owing more on their mortgages than they could generate from the sale of the property at prevailing market prices.  Those who found themselves in this situation faced a binary choice: they could continue to pay the post-adjustment interest rate on their ARM as well as the inflated property taxes that climbed along with rising housing prices or, if they had little or no money invested in their down payment, they could simply walk away and let the bank repossess the property.

Since the foreclosed properties often had market values below the mortgage value, the mortgage itself was not actually "worth" its face value.  Therefore, the worth of all sub-prime mortgages became suspect, and the value of derivatives based on bundles of those mortgages became questionable.  The financial collapse followed.

The president blames the Bush administration and Republicans for this state of affairs.  But as we have seen, George W. Bush surely wasn't president in 1977, when the original CRA was passed.

Bush wasn't president when Obama himself was pushing and suing to get more cash into the hands of marginally qualified purchasers.

Bush wasn't president during the thirty or so years that our public schools failed to educate young people as to the consequences of borrowing more than they could repay.

Bush wasn't president when states, municipalities, and school districts offered unsustainable wages and fringes to public-employee unions, assuming that the increases in real estate taxes would make for an endless stream of revenue.

So whom can Obama blame?  Well, some of the most destructive avalanches have begun with the dropping of a tiny pebble that unsettles the slope of a mountain.  Barack Obama dropped such a pebble in 1995 when he sued Citibank in Chicago.

So, Mr. President, it might be inferred that the mess you inherited, you actually helped cause yourself.

Jim Yardley is a retired financial controller for a variety of manufacturing firms, a Vietnam veteran, and an independent voter.  Jim blogs at http://jimyardley.wordpress.com, or he can be contacted directly at james.v.yardley@gmail.com.