Ellul gained first-hand knowledge of propaganda during World War II when, after being fired from teaching positions in French universities by the Vichy government, he became a leader in the Resistance. His efforts to save Jews earned him the title of Righteous among the Nations from Yad Vashem in 2001.  His book is recognized as a groundbreaking examination of propaganda combining the sociological and psychological disciplines.

"Propaganda is a set of methods employed by an organized group that wants to bring about the active or passive participation in its actions of a mass of individuals, psychologically unified through psychological manipulation and incorporated in an organization." (p. 61, Vintage Books Edition, February 1973)

In describing the role of symbols in propaganda, Ellul defined the slogan as a type of symbol.

"Another particularly evocative symbol is the slogan, which contains the demands, the expectations, the hopes of the mass, and at the same time expresses the established values of a group. Slogans determine with considerable precision each type of group toward which an individual is oriented, whether or not he is a member.

Above all, the slogan assures the continuity of the stereotype, which is fixed as a function of the past. But the individual finds himself constantly faced with new situations that the stereotype alone does not permit him to master; the slogan is the connection used by the propagandist to permit the individual to apply his old stereotypes to a new situation. He brushes up and adjusts the ready-made image; at the same time, he integrates the new situation into a classic context, familiar and unconfusing. That is why the slogan flourishes in times of crisis, war, and revolution. It explains also the attraction the slogan has: thanks to it, the individual is not intellectually lost. He clings to it not only because the slogan is easy to understand and to retain, but also because it permits him to 'find himself in it.' (p. 164 n.)

Forward is collectivist's language -- a summons to the masses to undertake some heroic advancement in support of a shared goal -- or presumably so. A sane person doesn't say "Forward" to just one person; nor does a battlefield commander order a single soldier to "Charge."  Forward is spoken by the one to the many.

Since Forward became the Obama campaign slogan in April, its popularity with socialist regimes has been noted, as well as how it diverts attention away from Obama's failures in office.

But the Obama campaign's use of Forward may have another, more focused, purpose: to attract Ellul's "marginal man".

"The propagandist must know the principal symbols of the culture he wishes to attack and the symbols which express each attitude if he is to be effective...A person is not sufficient unto himself; he belongs to that whole called culture by the Americans. Each person's psychology is shaped by that culture... [The propagandist keeps] in mind that the most important man to be reached is the so-called marginal man: that is, the man who does not believe what the propagandist says, but who is interested because he does not believe the opposition either..." (p. 34 n.)

Two months short of the November election, the marginal voters are what Ellul also called the "Undecided" -- "those people whose opinions are vague, who form the great mass of citizens, and who constitute the most fertile public for the propagandist." (p. 48)

"The Undecided are not the Indifferent - those who say they are apolitical, or without opinion and who constitute no more than 10 percent of the population. The Undecided, far from being outside the group, are participants in the life of the group, but do not know what decision to make on problems that seem urgent to them. They are susceptible to the control of public opinion or attitudes, and the role of propaganda is to bring them under this control, transforming their potential into real effect." (pp. 48-49)

Forward, a word often repeated by speakers at the Democratic National Convention, is the header under which the Obama campaign memes align. The Democrat call is to go Forward, not backward, as we continue to: fight for the reproductive rights of women; struggle for the growth and prosperity of the Middle Class being cheated by the under-taxed Rich; promote fairness in the distribution of America's wealth; grant college loans to poor students; protect Medicare (note there was less mention of ObamaCare) from Republican attacks; stand-up with Main Street against Wall Street -- and so on.

And, because backward is the opposite of Forward, the Obama campaign ridicules the opposition -- yet another Saul Alinsky tactic -- by comparing Romney and the Republican Convention to the culture of the 1950's, going backward in time. Ellul understood why this happens; because a slogan based on out-dated traditions fails to inspire.

"The progress of technology is continuous; propaganda must voice this reality, which is one of man's convictions...No propaganda can succeed if it defends outdated production methods or obsolete social or administrative institutions. Though occasionally advertising may profitably evoke the good old days, political propaganda may not. Rather it must evoke the future, the tomorrow that beckons, precisely because such vision impels the individual to act." (pp. 40-41) 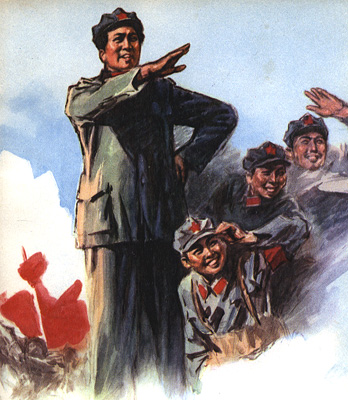 Consequently, we'll continue to hear the exaggerated claims for implied, near-term energy benefits from wind and solar power, as well as hints of innovative technologies on the horizon -- Forward.

The most redundant and destructive propaganda meme now in play in the Obama campaign is class warfare, based on class envy. Romney's money is in the Cayman Islands -- Michelle remembers Obama's car with a hole in the floorboard -- Obama saved the auto industry -- Romney wanted to let the auto industry die -- Obama saved the unions -- Romney wants to off-shore more jobs -- Obama has created millions of jobs -- Romney laid-off workers -- Romney wants to cut educational programs for poor kids -- Obama wants to have a competent teacher in every classroom. With Romney we go backward. With Obama we go Forward.

Propaganda is effective because, as Ellul wrote,

"Each individual harbors a large number of stereotypes and established tendencies; from this arsenal the propagandist must select those easiest to mobilize, those which will give the greatest strength to the action he wants to precipitate." (p.35)

Class warfare is one such "stereotype" and "established tendency." It's been fed and nurtured by progressives in America for a very long time. It has a special pull on those who feel like victims.

Forward.  It's an order, not an appeal. A command, not a call. It has been, throughout history, the language of the dictator.

In the list of presidential campaign slogans in American history, Forward is the shortest and most imperative. Compare it to Grover Cleveland's chant "Blaine, Blaine, James G. Blaine, The Continental Liar from the State of Maine."  And Eisenhower's "I like Ike."

Obama's Forward is not aimed at his true believers who --- with cult-like adoration -- shed tears when he speaks, whatever he says. Nor will it have any play with those who've decided that his election defeat is critical to the future of the nation.

Obama's Forward targets the "marginal man," the "Undecided" voter, offering its collectivist connotations -- because we're all in this together.  So let's all go Forward.

This implied togetherness of Forward stands in sharp contrast to Obama's class warfare meme, in all its various expressions. But lest we assume that the "marginal man" will discern any inconsistencies, Ellul dispelled that notion.

"[T]here is not necessarily any continuity between opinion or fixed patterns and action. There is neither consistency nor logic, and a man can perfectly well hold on to his property, his business, and his factory, and still vote Communist - or he can be enthusiastic about social justice and peace as described by the Communists, and still vote for a conservative party...The skillful propagandist will seek to obtain action without demanding consistency, without fighting prejudices and images, by taking his stance deliberately on inconsistencies." (p. 35)

Consider this inconsistency:  Billionaire Warren Buffett -- whose company owes taxes going back ten years -- is warmly welcomed at the White House as an Obama supporter.  Meanwhile, Obama criticizes the Rich for not paying their "fair share" of taxes, and slams Romney for allegedly having an off-shore bank account.  And what about this one: General Electric's CEO Jeffrey Immelt chairs Obama's Job Council while GE exports thousands of jobs overseas.

There is no demand from any quarter for consistency because, as Ellul wrote, "the skillful propagandist will seek to obtain action without demanding consistency".

So the call of the Obama campaign goes out to his loyal followers and to the undecided alike - Forward. Don't look backward. Don't even look too closely at what's ahead going Forward.

Just march, and feel the emotion of motion moving Forward.

Particularly those of you with no clue as to what direction the nation ought to be moving.