Warning: mysqli_free_result() expects parameter 1 to be mysqli_result, bool given in /var/www/html/americanthinker/admin/common/functions/func.general.php on line 126
 Colorado Democrat Redistricting May Have Left Opening for Republican Underdog - American Thinker
|

Colorado Democrat Redistricting May Have Left Opening for Republican Underdog

Democrats in Colorado celebrated a hard-fought victory in late 2011 when a state judge sided with the re-districting map of the recently won Democratic majority statehouse.  Congressional districts that were safely Republican were less so, and competitive Democratic districts became safer.

When the smoke cleared, one congressional district, Colorado's 2nd, went from being safely Democratic to almost evenly split between Republican and Democratic voters, with a slight edge to Democrats.  Now the incumbent Democrat congressman from the 2nd congressional district, Jared Polis, has a race on his hands with underdog Republican Kevin Lundberg.

And the differences in the positions taken by the two candidates are just as evenly split as the district they hope to represent.  According to his campaign website, Republican Kevin Lundberg calls for cutting federal taxes and fees, limiting the size and scope of government, repealing ObamaCare, enacting tax credits for families who home-school, overhauling the EPA, encouraging domestic energy exploration, and restricting abortion.  In fact, the Kevin Lundberg campaign website lists positions Lundberg has taken not only as a state senator, but also as a local state representative, as far back as 2003.

Incumbent Democrat Congressman Jared Polis has a campaign website that curiously has no campaign issues in it at all besides vague generalities.  "Like many Americans, I am frustrated with the partisanship and posturing of our leaders in Washington D.C.," he says on his website.  Well, sure...perhaps not taking any campaign positions is a good step toward ending the "partisanship and posturing of our leaders in Washington," but shouldn't a candidate for Congress tell the voters the candidate's positions before trying to get re-elected by the voters?  Maybe this is what the Republicans are talking about when they keep referring to an "empty chair" in the debate of ideas.

We do know from the Washington Post that in the last two years, Congressman Polis has voted with the Democratic Party 88% of the time, and for the same timeframe the National Federation of Independent Business has ranked Polis' support for small businesses at 0%.  Polis rarely seems to make any news, except when issues of gay marriage come up.

Jared Polis was one of the only openly gay congressional candidates to have ever been elected to Congress, when in 2008 he was elected to represent the then-safe Democrat 2nd district.  In 2010, Polis  won re-election by a disappointing margin against a poorly funded and unknown Republican challenger.  Now that there are more Republicans in his district, one can almost understand deleting his positions from his campaign website. 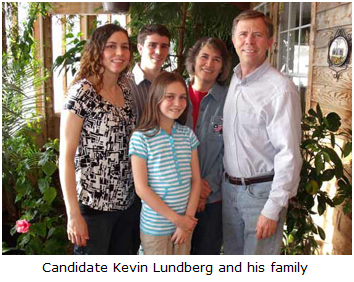 Other positions that Polis has taken in office include rules supporting ObamaCare, limiting "fracking" in oil drilling, favoring of cap and trade, gun control, loosening rules against illegal immigration, legalizing marijuana, and subsidizing "green" energy.  Truly, Polis and his challenger Lundberg are polar opposites on almost every issue.

Lundberg Campaign Manager Debbie Healy told me that after a recent candidate forum she asked a voter in the audience his impression, and the voter told her that "I just cannot believe there are two candidates with views so opposite.  One candidate wants to have government control everything, and the other one wants government to back off and give people their freedom."

To be fair to Polis, before being elected to Congress, he had impressive private-sector experience, making hundreds of millions of dollars in internet start-ups.  A recent Open Secrets article estimated that based on recent financial disclosures, Polis has a net worth of up to $228 million, making him the fourth-richest member of Congress.  Polis has set up an educational foundation that gives grants of computers to schools and has set up two charter schools.

Kevin Lundberg has also had a lot to do with education.  Since the 1980s, Lundberg and his wife Sandy have home-schooled their three kids, and in 1990 Kevin Lundberg founded the Christian Home Educators of Colorado (CHEC), which advises home-schooling parents with teaching curricula and compliance and legal requirements.  Lundberg tempers his enthusiasm for tax credits for home-schoolers with the concern that "this should not become a back-door for government meddling in home-schooling."

As could be expected, Jared Polis has an impressive campaign war chest, much of it self-funded, and as of the latest federal disclosure statements, Polis has a more than 10-to-1 funding advantage over Republican Kevin Lundberg.  Still, Lundberg told me that he has had this much of a financial disadvantage in other elections, and he has won.  "I have been outspent in every election I have ever been in," he said.

A recent internal poll conducted by the Lundberg campaign was encouraging.  The poll conducted in early August showed Lundberg only 8% behind Polis in the district.  The same poll showed that incumbent Polis had a name recognition lead of 80% to 45% over Lundberg.  Lundberg told me that this shows that "getting the names and issues out there is critical in this campaign."

Anyone wanting to contribute to the Kevin Lundberg for Congress campaign may do so here.  The Lundberg website is also a good place to sign up for other

ways to help the campaign, like phone-calling potential voters.  Healy told me that thanks to the numbers and enthusiasm of the local grassroots supporters, including local Tea Partiers, "it's game on."