Warning: mysqli_free_result() expects parameter 1 to be mysqli_result, bool given in /var/www/html/americanthinker/admin/common/functions/func.general.php on line 126
 Winning the AGW Science Debate: Here's How - American Thinker
|

The upcoming election battles may be unique in offering for the first time a debate about global warming.  Neither Bush-Gore nor McCain-Obama chose to discuss the issue -- maybe because they were not really that far apart.  By contrast, Barack Obama has already announced that, if re-elected, he will make climate change an important priority -- while Paul Ryan is an assertive skeptic on AGW (anthropogenic global warming).

The science of climate change is not just of academic interest, but has been leading to policies for large-scale changes in energy use and supply -- with important economic consequences.  The burden of proof for AGW therefore falls on those who call for such policies.  They must demonstrate with reasonable certainty that human activities are causing global warming, that a future warming will produce significant economic and ecological damage, and that it would be more cost-effective to mitigate now rather than to adapt later.  They must also be ready to respond to any critique of the underlying science.

A recent example of irresponsible AGW claims is a just-released statement by the American Meteorological Society -- the same crew that cannot predict the weather three days in advance.  The concluding section begins:

There is unequivocal evidence that Earth's lower atmosphere, ocean, and land surface are warming; sea level is rising; and snow cover, mountain glaciers, and Arctic sea ice are shrinking. The dominant cause of the warming since the 1950s is human activities. This scientific finding is based on a large and persuasive body of research.  The observed warming will be irreversible for many years into the future, and even larger temperature increases will occur as greenhouse gases continue to accumulate in the atmosphere. Avoiding this future warming will require a large and rapid reduction in global greenhouse gas emissions. The ongoing warming will increase risks and stresses to human societies, economies, ecosystems, and wildlife through the 21st century and beyond, making it imperative that society respond to a changing climate.

I would start by asking AGW supporters the following question: "What is your single most important piece of evidence for AGW?"  I have received many answers to this question; most of them can be disposed of in a trivial way.  Some examples are:

But note also that climate seems to follow long-term cycles of about 1,500 years (Singer and Avery, Unstoppable Global Warming: Every 1500 years, 2007).  If the "Bond-cycle" is active now, we may expect further, irregular warming in the present century and beyond -- entirely due to natural causes, likely related to the Sun.

Finally, a common response simply appeals to the report of the U.N.-IPCC (Intergovernmental Panel on Climate Change).  To which one should say: "OK, then let's see if it holds up to scrutiny."  (Note that the "evidence" presented as crucial has been different in every one of the past four IPCC assessment reports.)  The latest IPCC claim for AGW is laid out simply in the Summary for Policymakers on page 10 of the 2007 report: "Most of the observed increase in global average temperatures since the mid 20th century is very likely [i.e., 90-99% sure] due to observed anthropogenic increase of greenhouse gases." 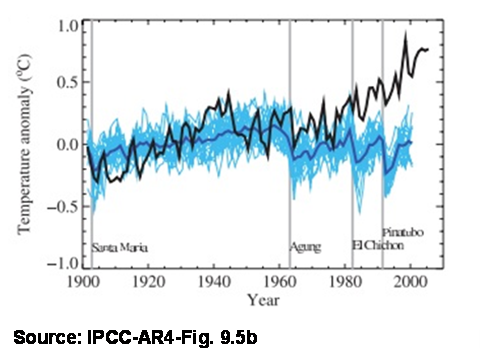 The IPCC, claiming that they completely understand all natural forcings, now asserts that only AGW (i.e., forcing by anthropogenic GH gases) can explain the gap between the reported global average surface temperature (GAST) and models that do not include GH-gas forcing.  (This is an instance of the common logical fallacy of "argument from ignorance."  Even if the warming since 1970 were exceptional, and even if science were unaware of any natural explanation for it, that unawareness would not constitute certain evidence that GH gases are responsible.)

Even if we were to accept the IPCC's assertion for the sake of argument, note that the temperature curve refers to global surface average temperature and that the models are retrofitted to the temperature data by a suitable choice of climate sensitivities and parameters of the models.

Note that the sensitivities and parameters are chosen with great care in order to reach agreement with the reported GAST data; yet the same IPCC report admits to very large uncertainties about most forcings (in fact, 11 out of 16), particularly from aerosols and clouds.  But the greatest uncertainty arises from implicit feedbacks that the models assume will amplify direct warming from GH gases.  In particular, there is uncertainty about the feedback from water vapor and clouds: the IPCC claims a positive feedback -- i.e., an amplification of GH forcing of nearly threefold -- while others adduce evidence for a negative feedback -- i.e., opposing GH warming.  This is a matter that needs to be resolved urgently; and, until it is, the science underlying the "official" IPCC claim cannot seriously be regarded as "settled."

Further, the models are largely unable to represent or capture important natural forcings -- for example, well-documented climate oscillations involving the oceans, such as the North Atlantic Oscillation or Pacific Decadal Oscillation.  Also omitted from the models are the effects of solar-activity changes -- in spite of excellent evidence, supported by a growing body of published results, that solar-caused cosmic-ray variations strongly correlate with terrestrial climate changes.

Turning next to climate observations, there are many questions about the reliability of the reported land-surface temperature data reported by weather stations.  Mid-troposphere temperatures do not agree with surface trends -- a disparity that a National Academy of Sciences climate panel tried unsuccessfully to resolve in 2000.  It seems that mid-troposphere temperature trends derived from radiosondes in weather balloons and from microwave instruments in satellites both show negligible tropical warming in the last decades of the 20th century.  Data are never perfect, and there may be corrections necessary.  However, for the time being, these two independent datasets show remarkable agreement with one another, and remarkable disagreement with what the IPCC models would expect as a result of anthropogenic warming.

Ocean data have been notoriously difficult to reconcile, since they employ so many different types of instrumentation.  These include buckets, buoys, ship-engine cooling-water inlet temperatures, and both infrared and microwave satellite observations.  Unfortunately, there are problems with each of the datasets; their coherence is often different from what one might expect.  One example: inlet temperatures seem to be warmer than bucket and drifter buoys that measure temperatures close to the surface -- just opposite of what would be expected.

Additional ocean datasets do not show the warming observed by land weather stations; for example, night-time marine air temperatures (NMAT) confirm the strong warming up to 1940 and cooling to 1975 but show only a small recovery post-1978, with maximum temperatures in the 1990s no greater than in 1940.  Similarly, data of ocean heat content (OHC) do not show a warming trend from 1978 to 2000 -- although it should be noted that 20th-century OHC data is of poor quality and has been subject to frequent corrections.

Finally, we have non-thermometer proxy data, which mostly show no warming from 1978 to 1997.  Most confirm the 1910-40 warming from weather stations -- but also show no post-1940 warming.  It would be interesting to examine the large dataset assembled by the authors of the "hockeystick" to see what temperatures are observed after 1978; unfortunately, their published curve stops at just that point, and their post-1978 data have not been accessible.

It should be clear by now that the strong AGW claims of the IPCC are based on rather flimsy evidence.  We look forward to the next IPCC report due in 2013-14 to see if additional data and model results show better support for their claim.  I serve as an "expert reviewer" of this report but have not seen any such evidence in the first draft.

In the meantime we can post certain question to the AGW supporters and await their answers:

**Why did climate cool from 1940-1975?  If the cause is assumed to be aerosols, also please explain the separate trends observed in the northern and southern hemispheres and compare with climate models.  This asymmetry has been a puzzle for some time.

**Why is there no pronounced warming trend since 2002?

**And finally, why no warming for night-time marine air temperatures, troposphere, and proxies in the last two decades of the 20th century -- in conflict with reported land-surface temperatures?  Could one admit the possibility that there might be something wrong with the land-surface data used by IPCC as "evidence" for AGW?

For these and many similar reasons, scientific debate about the extent and implications of the anthropogenic contribution to past and future global warming is essential for formulating a rational energy policy as the keystone for economic prosperity.  The upcoming election battles may provide such an opportunity.

S. Fred Singer is professor emeritus at the University of Virginia and director of the Science & Environmental Policy Project.  His specialty is atmospheric and space physics.  An expert in remote sensing and satellites, he served as the founding director of the US Weather Satellite Service and, more recently, as vice chair of the US National Advisory Committee on Oceans & Atmosphere.  He is a senior fellow of the Heartland Institute and the Independent Institute.  He has also held several government positions and served as an energy adviser to Treasury Secretary Wm. Simon.  He co-authored the NY Times bestseller Unstoppable Global Warming: Every 1500 years.  In 2007, he founded and has chaired the NIPCC (Nongovernmental International Panel on Climate Change), which has released several scientific reports (see www.NIPCC.org).  He is the founding chairman of Virginia Scientists & Engineers for Energy & Environment (VA-SEEE).  For recent writings see http://www.americanthinker.com/s_fred_singer/ and also Google Scholar.