Warning: mysqli_free_result() expects parameter 1 to be mysqli_result, bool given in /var/www/html/americanthinker/admin/common/functions/func.general.php on line 126
 The Government Is Bankrupt and Will Destroy the Economy - American Thinker
|

The Government Is Bankrupt and Will Destroy the Economy

Most people don't understand the unsolvable problem the U.S. government has created for itself and its citizens.  Sovereign default is beyond a likelihood; it is inevitable.

When and which (possibly all) obligations are defaulted on will be determined by panicked politicians under duress.  A complete financial and economic collapse appears unavoidable.  I hope that is the worst that will occur.

In our study "Growth in a Time of Debt," we found relatively little association between public liabilities and growth for debt levels of less than 90 percent of GDP. But burdens above 90 percent are associated with 1 percent lower median growth. Our results are based on a data set of public debt covering 44 countries for up to 200 years. The annual data set incorporates more than 3,700 observations spanning a wide range of political and historical circumstances, legal structures and monetary regimes.

Our empirical research on the history of financial crises and the relationship between growth and public liabilities supports the view that current debt trajectories are a risk to long-term growth and stability, with many advanced economies already reaching or exceeding the important marker of 90 percent of GDP.

The U.S. has passed their danger point, and recent U.S. GDP experience conforms to their findings.  The economy is growing at subnormal rates despite unprecedented stimulus efforts.  A recent Rasmussen survey found that only 27% believe that the economy is improving.

Debt problems in the U.S. are worse than stated -- much worse.  Three areas shed light on the problem:

Each is discussed below.

The glide path of expected spending and revenues indicates that the debt problem will get worse.  While forecasting may be a fool's errand, especially when extended ten years out into the future, the CBO estimates (under its alternative budget):

Under that alternative fiscal scenario, far larger deficits and much greater debt would result than are shown in CBO's baseline. Deficits would average 5.4 percent of GDP over the 2013-2022 period, rather than the 1.5 percent reflected in CBO's baseline projections.

The assumptions supporting these numbers are suspect, meaning the estimate could be off either way, and possibly by large amounts.  Assumed interest rates (a very important variable with regard to government expenditures), employment rates, the resolution of the European crisis, existing banking system problems, etc., etc. are difficult to forecast.  So too are political biases and future economic policies which may alter projections, although not the ultimate outcome.

If deficits do average 5.4% of GDP over the ten-year period, the debt-to-GDP ratio will worsen, because GDP growth typically averages much less over a long period.

The Paul Ryan Budget Plan is every bit as subject to assumption risks as the CBO forecast.  It may be more susceptible to political risk, according to David Stockman (obviously not a fan of the plan):

Mr. Ryan's plan is devoid of credible math or hard policy choices. And it couldn't pass even if Republicans were to take the presidency and both houses of Congress. Mr. Romney and Mr. Ryan have no plan to take on Wall Street, the Fed, the military-industrial complex, social insurance or the nation's fiscal calamity and no plan to revive capitalist prosperity - just empty sermons.

The Ryan budget, if achieved, would not stop the rise in government debt, although it would slow the rate of increase.  Under his plan, debt rises by $3 trillion.  That compares favorably with other plans -- e.g., Obama's plan increases debt by almost $7 trillion and the size of government even more, covering some of the higher spending with increased taxes.  The Ryan plan does not end deficits but could result in GDP growing at a faster rate than debt, lowering somewhat the ratio of debt to GDP.

In addition to the debt of $16 trillion, the Treasury has explicitly guaranteed the debts of certain government agencies.  Furthermore, Treasury undoubtedly would underwrite the failure of certain other agencies or private entities, as demonstrated by bank and auto bailouts.  How much this could add to the federal debt over the next several years is moot and a function of what happens to the economy.

The Treasury nationalized Fannie Mae and Freddie Mac, effectively guaranteeing $6 trillion of debt not recognized on government's balance sheet.  A host of other government agencies probably would be backed by Treasury as necessary.  These include the Postal Service, Amtrak, the Federal Deposit Insurance Corporation, the Pension Benefit Guaranty Corporation, and others.  Arguably, every one of these entities is bankrupt and will need assistance before the economic crisis terminates.

The pension problem in this country is enormous.  For example, General Motors and Chrysler are estimated to have a potential $42-billion liability for the PBGC.  At the end of 2009, the exposure of this agency was estimated to be $168 billion.  A recent estimate suggests that private pension plans are underfunded by $435 billion, a number that could worsen dramatically if financial markets do not improve.

Public-sector pensions are estimated to be over a trillion dollars underfunded.  Would the PBGC step in when municipalities routinely begin to file for bankruptcy to rid themselves of these liabilities?

The FDIC has virtually no funds to bail out depositors in the event of bank failures.

The unfunded liabilities of the federal government are enormous, dwarfing everything else.  They arise from promises made to citizens, primarily with respect to Social Security and Medicare.  Government maintains that it has no legal liability to honor these promises and hence does not recognize them as debt.  For seniors or near-to-be seniors counting on what they have paid all these years, that attitude is not comforting.

It is unlikely that these programs will be canceled, although they will eventually be modified.  Even so, there is likelihood that the promises will not be kept.

Estimates of the present value of these obligations range from $50 trillion to over $200 trillion, depending upon the actuarial assumptions made.  Gary North uses Laurence Kotlifkoff's figures and explains the calculation (my italics):

This estimate is 14 times what government reports as debt ($16 trillion).  The number is unfathomable.  To put it into perspective, the entire net worth of the U.S. is estimated to be only $60 trillion, as shown in this chart: 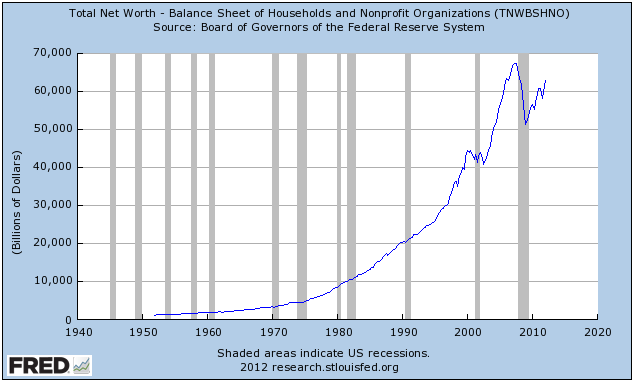 According to Kotlikoff's calculations, the U.S. government has promised its citizens almost four times the entire net worth of the nation.  If the government confiscated everyone's net worth, people would be left penniless, and the government would still be unable to fund these promises.

At the risk of confusing readers, the annual government deficit using Generally Accepted Accounting Principles (GAAP) is $11 trillion per year, not the $1.3 trillion that will be reported.  Kotlikoff's calculations of the unfunded liabilities may be high.  Other estimates are lower, but not enough to alter the conclusion that the U.S. is hopelessly broke.  Gary North comments on lower estimates:

Even if Kotlikoff is wrong by a hundred trillion dollars, it becomes clear that Congress is completely incapable of dealing politically with this problem. It could not possibly raise the funds to balance the budget if the budget really is increasing by, say, $5 trillion per year [GAAP calculation].

The claimed debt of the federal government ($16 trillion) is enough to threaten its viability and that of the U.S. economy.  The current glide path of spending and revenues ensures that debt will increase.  Explicit and implicit Treasury guarantees will require additional debt to bail out failing public and private agencies.  The situation becomes hopeless when the unfunded liabilities are taken into account.

Buckle up for a very scary ride.