American Thinker was the first to report about how Fauquier County, Virginia attempted to fine farmer Martha Boneta for hosting a birthday party for eight 10-year-old girls without a special events permit.  She was also fined for selling her farm produce without a special administrative permit, even though she had a business license that allowed those sales.

As also reported here, Martha the farmer lost her appeal before the county's Board of Zoning Appeals.  What has not been reported is that Fauquier County, without explanation, refused to renew her business license just days before her appeal hearing.  She has been forced to shut down her small farm store where she sells organic vegetables, fiber, and feather products from her farm animals (she has over 160, most of which are rescued), as well as beeswax candles, goats milk soaps, and other products from her farming activities.

Because she could not sell her organic vegetables in this critical part of the harvest season, Martha donated them to a local food bank before they rotted.  Fauquier County zoning administrator and bureaucratic bully Kimberley 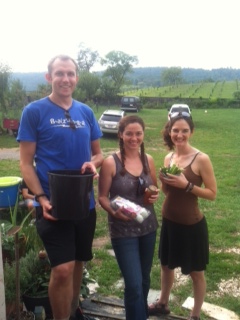 Johnson is probably busy concocting some charge against Martha for giving away her veggies without a permit.  No tomato is beyond the reach of tyrants.

One local newspaper editorial claimed that Martha could have saved herself a lot of trouble and money had she just gotten the $150 administrative permit to sell her farm products.  The message from a few purveyors of free advice is that had Martha just lacked principles and done what her master, an unelected government bureaucrat, had dictated to her, she'd be in a better place.  But beware of free advice from statists.

Martha had a business license to operate a tiny farm store that sits scenically amid her farm animals and organic vegetables.  In 2011, however, Fauquier County added a new requirement for farmers, which it called a "special administrative permit."  The county's board of supervisors touted this new permit as an improvement on and a clarification of what farmers could sell on their private property.  Puh-lease.

One local environmental group with an unusual amount of influence over Fauquier County officials was assuredly behind the 2011 administrative permit.  This group touted the county's recent controversial winery ordinance as a balance of interests.  The ordinance forces wineries to close at 6 p.m., defines and limits "personal private gatherings" allowable at wineries, and is a gross affront to property rights and civil liberties.  The interests being balanced seem to be statism and revenue.

The administrative permit that Martha the farmer rejected in the name of fighting for liberty is highly restrictive of the rights of farmers.  The permit is vague and open to selective enforcement.  For example, it limits farms sales to only agricultural products, at least 50 percent of which must be grown at the farm, and anything not grown at the farm must be labeled as such.

The permit therefore makes it illegal for farmers to sell ice-cold water and other beverages.  Under the permit, farmers may not sell books with pictures of the county, home-spun art, farming artifacts, or even any literature authored by the farmers themselves on farming, animal husbandry, and the like.

Even when conditions demand it, farm stores are limited in supplementing their produce by bringing in vegetables from neighboring farms, making mortgage and property tax payments more difficult than they already are.  And the permit is not clear: is it 50 percent of each type of vegetable, or 50 percent cumulatively of all the vegetables that you sell?  Only zoning czar Kimberley Johnson knows for sure.

The administrative permit also restricts what may take place at corn mazes, pumpkin patches, and other farm events for children.  Fauquier County obviously doesn't want children to get the full farm experience -- oh, but we already knew this, since the county penalized Martha for that birthday party.

Perhaps dumbest on the new list of don'ts is that farmers must keep dust from their driveways.  You read that right:  Fauquier County wants dust-free farms.  The permit provides no guidance about how much dust is illegal.  Farmers typically don't pave their driveways because -- well, because they live on farms.

Kimberley Johnson wrote to one person that farmers should water their driveways.  This means that during hot, dry spells, farmers would need to divert scarce water from crops and livestock, or face fines.

Martha could have opted into the new, more restrictive permit requirement.  She instead opted to use the phrase from Herman Melville's Bartleby, the Scrivener: "I would prefer not to."  In doing so, she has made herself a hero in the fight against government that breaks the law, and the anti-liberty faux environmental groups that use government for their own corrupt agendas.

What has not been reported is that in March, zoning tyrant Johnson sent her assistant Andrew Hushour, without probable cause or a judge-signed warrant, to investigate Martha's farm for a "boarding house" violation.  Martha, you see, had college students staying at her home near the farm.  The students were volunteering during their spring break to learn about organic farming.

Days before the pitchfork protest for Martha, one county official told me that Martha is under a tax audit.  I told this official that whether this is true or not, it would be illegal for anyone to disclose it to him.

Thousands of times per day, government violates the law, bullies its citizens, and compounds its grab of our property rights and individual liberties.  We don't hear about most of these incidents because most people fear government retribution and decide to cave in.

Martha's cause, it seems, will help expose more than just government abuse of zoning laws in Fauquier County.