It is still unclear whether Huma Abedin, Hillary Clinton's closest aide, has been properly vetted or not.  This issue rose to prominence after Michele Bachmann and four other congressional representatives expressed concerns about Huma's family's longstanding connections to the Muslim Brotherhood.

Barack Obama voiced strong support for Huma Abedin during the annual iftar dinner, but Walid Shoebat has asserted that President Obama needs to "refute the facts [that have been presented about Huma Abedin] and provide answers that are void of rhetoric."

According to Cliff Kincaid, all this controversy could be resolved "by demanding access to Abedin's Standard Form 86, which she was supposed to fill out before getting her State Department job."  Did Huma Abedin disclose her family's connections to the Muslim Brotherhood?  How did she fill out the 127-page lengthy questionnaire when she applied for this national security position?

In Section 13A of the Questionnaire for National Security Positions, under "Employment Activities," did Abedin acknowledge that she was an assistant editor of the Journal of Muslim Minority Affairs, an offshoot of the Institute of Muslim Minority Affairs (IMMA), founded by Abdullah Omar Naseef, secretary general of the Muslim World League in Saudi Arabia, "perhaps the most significant Muslim Brotherhood organization in the world"?  The Muslim World League provided funds to Osama bin Laden and "is an observer member of the Organization of Islamic Conferences, an inter-governmental coalition dedicated to 'liberating Jerusalem and Al-Aqsa from Zionist occupation.'"

Did Abedin admit that she was a member of the Muslim Student Association (MSA) (see below)?  The MSA is a front group for the Muslim Brotherhood.  It resulted from Saudi-backed efforts to establish Islamic organizations internationally in the 1960s, for the purpose of spreading its Wahhabist ideology across the globe. 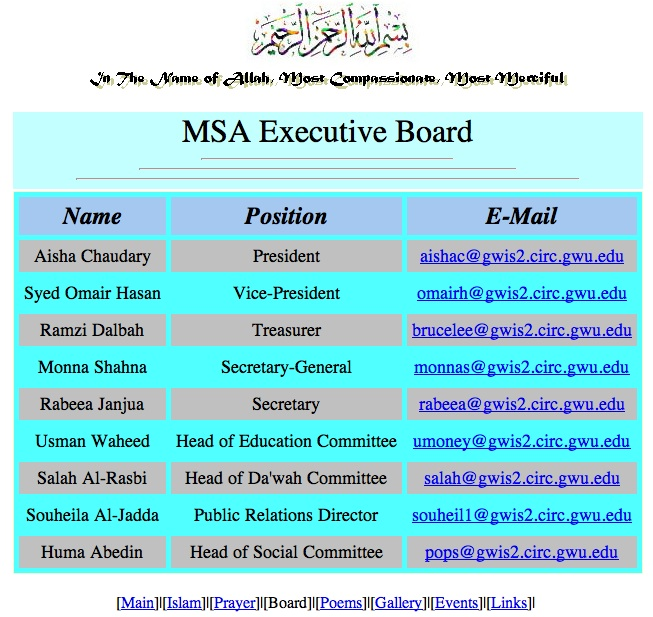 Did Ms. Abedin indicate her role?  Was it merely overlooked by the State Department officials who reviewed the application?  If so, why?

Because of the nature of security, it is understood that questions about relatives will be asked.  In Section 18 of the Questionnaire, the applicant is asked if a "relative [is] affiliated with a foreign government, military, security, defense industry, foreign movement, or intelligence service[.]"  In fact, Huma Abedin's mother, father, sister, and brother are all affiliated with the Muslim Brotherhood, the Muslim Sisterhood, and the Institute of Muslim Minority Affairs (IMMA), as well as with the World Assembly of Muslim Youth (WAMY).  These groups espouse terrorism, anti-American policies, and anti-Semitism.

Question 18.5 asks about the "methods of contact" the applicant has with various relatives that include mother, father, stepmother, stepfather, foster parent, child, stepchild, brother, sister, stepbrother, stepsister, half-brother, half-sister, father-in-law, mother-in-law, and guardian.  Repeatedly, the candidate is asked if "this relative [is] affiliated with a foreign government, military, security, defense industry, foreign movement, or intelligence service[.]"

Continuing, "[h]as any foreign national ... offered you a job, asked you to work as a consultant, or consider employment with them?  Have you had contact with a foreign government, ... its establishment or its representatives?"

Adding to the mounting evidence, Walid Shoebat made public another extraordinary finding entitled "The Abedin 'Affairs' with Al Saud," in which Shoebat claims that "the Abedins' Institute for Muslim Minority Affairs-on whose Board Huma Abedin served for years-and the Wahhabist plans of Saudi Arabia, commissioned by the House of Saud" are inextricably linked "to construct a plan to conquer the world with Islam."

The greatest challenge that faces Muslims in the United States and Canada are the Jews who take advantage of their material ability and their media to distort the image of Islam and Muslims there by spreading their lies and distortions in the minds of the people in these countries.

Juxtaposing the questions for National Security positions against the illuminating information discovered by Shoebat gives even greater impetus to inquire further into Huma Abedin's background.

How does one explain what "ISNA's Mohamed Magid, an entity in the Saudi manifesto, is doing in the White House, sitting across the table from Huma Abedin who was an IMMA assistant editor, another entity created by the House of Saud"?

Section 20C of the Questionnaire is of particular interest.  Regarding foreign travel, "were you contacted by, or in contact with any person known or suspected of being involved or associated with foreign intelligence, terrorist, security, or military organizations?"

The tentacles of the Muslim Brotherhood and its affiliates crisscross one another in a dizzying alphabet-soup array of groups, intent on global jihad, of which the Abedin family has been at the forefront for many years.

Additionally, "[w]hile traveling to, or in this country, were you involved in any counterintelligence or security issues not reported" and/or "were you contacted by, or in contact with anyone attempting to obtain classified information or unclassified, sensitive information?"

According to Walid Shoebat:

The Abedins went back and forth from east to west, even working during 1978 with Maulana Muhammad Yousuf of Jamaat-e-Islami in India. Yusuf came after Abu Al-Ala Maududi, who was key in the Tabligh in the Indian subcontinent's equivalent of the Muslim Brotherhood. It has extensive ties to Wahhabists, including Al-Qaeda and other terrorist groups. They represent an extremist Salafist brand. Then they travel[ed] to Saudi Arabia working with Naseef who spearheaded IMMA and commissioned the Abedins from Saudi Arabia to launch the program in the U.S. and the United Kingdom.

Have you EVER been a member of an organization that advocates or practices commission of acts of force or violence to discourage others from exercising their rights under the U.S. Constitution or any state of the United States with the specific intent to further such action?

Have you EVER knowingly engaged in activities designed to overthrow the U.S. Government by force?

Given the record of the Muslim Brotherhood, one would be hard-pressed not to answer in the affirmative, given the affiliations mentioned earlier in this piece.  The evidence of the connections exists.  Has Ms. Abedin foresworn the basic tenets of these subversive organizations or not?  Why does the Abedin family work "with nefarious characters like Naseef and Qaradawi"?

It appears that the Saudis have created a spider web to ensnare the United States.  In fact, 50 years of transforming the West through mosque-building, educational programs, and organizations like ISNA and MSA has helped "to ensure that Muslims will be an unassimilated group which then can influence the non-Muslim host nations ... to shift the demographic scale due to ... population growth in favor of this Saudi agenda."

Shoebat maintains that he is "unequivocally talking about a grand conspiracy that is no manufactured theory[,]" and he offers proof in his report.  In order to counter his critics, Shoebat researched the IMMA to show "how it connects to the House of Saudi's evil plan."  Thus, "the Abedins' Institute of Muslim Minority Affairs (IMMA) is actually the western branch from which WAMY (World Association of Muslim Youth) was established."

Why can't we get straight answers?  Why is it proscribed to discuss these items?  If there is nothing to hide, it should be simple to allay concerns.  If, however, there are forces in play that harm American security, it is the moral and legal obligation of Congress to continue to investigate.  It is each American's duty to demand the answers.