The brouhaha over pro-Israel ads I placed on buses in San Francisco and counter-jihad ads I put in train stations in towns just north of New York City just keeps getting larger.  Some people just can't stand it when others tell the truth.

On Friday, I received an e-mail from Peter Swiderski, mayor of the village of Hastings-on-Hudson, New York, saying: "I wanted to share with you what our Board of Trustees sent to the entire village tonight."  What the mayor wanted to "share" was a statement about our billboard that states: "19,250 Islamic attacks since 9/11: It's not Islamophobia, it's Islamorealism."

"While the Board respects everyone's right to free speech," they wrote, "we categorically condemn the bigotry and innuendo expressed by this billboard message. To tar a faith and its followers because of the actions of a few is deplorable, hateful and morally repugnant."  But actually, the Board is reading the idea that "all Muslims" support jihad terror attacks into my ad.  That is nowhere in my message.  They are the Islamophobes and racists, not I.

Do these politicians really believe that all Muslims support jihad?  And if they believe it, why surrender so swiftly?

The Board asked residents of Hastings-on-Hudson to write to the New York City Metropolitan Transit Authority (MTA) expressing their "dismay" that our ads were not deemed "hate speech."  The mayor and this Board of spineless wonders maintained their neutrality about the anti-Semitic ads that the MTA previously ran; they were silent about them.  Notice how these clowns at one government entity have "complained" to another about private citizens exercising their constitutional rights.

I in turn wrote to Mayor Swiderski, asking him "why no such mailing went out concerning the vicious anti-Semitic ads. The anti-Israel ads were twice the buy (100 kiosks.)  This speaks to a systemic, institutionalized anti-Semitism prevalent in your administration and among the Board. Care to comment?"

I did not, of course, hear back from Peter Swiderski.

Meanwhile, in an unprecedented move, the city of San Francisco is placing craven ads right next to every one of our pro-Israel ads on San Francisco Muni buses.  Our ads say: "In any war between the civilized man and the savage, support the civilized man. Support Israel. Defeat jihad."  The city's disclaimers say: "Muni condemns statements that describe any group as savages." 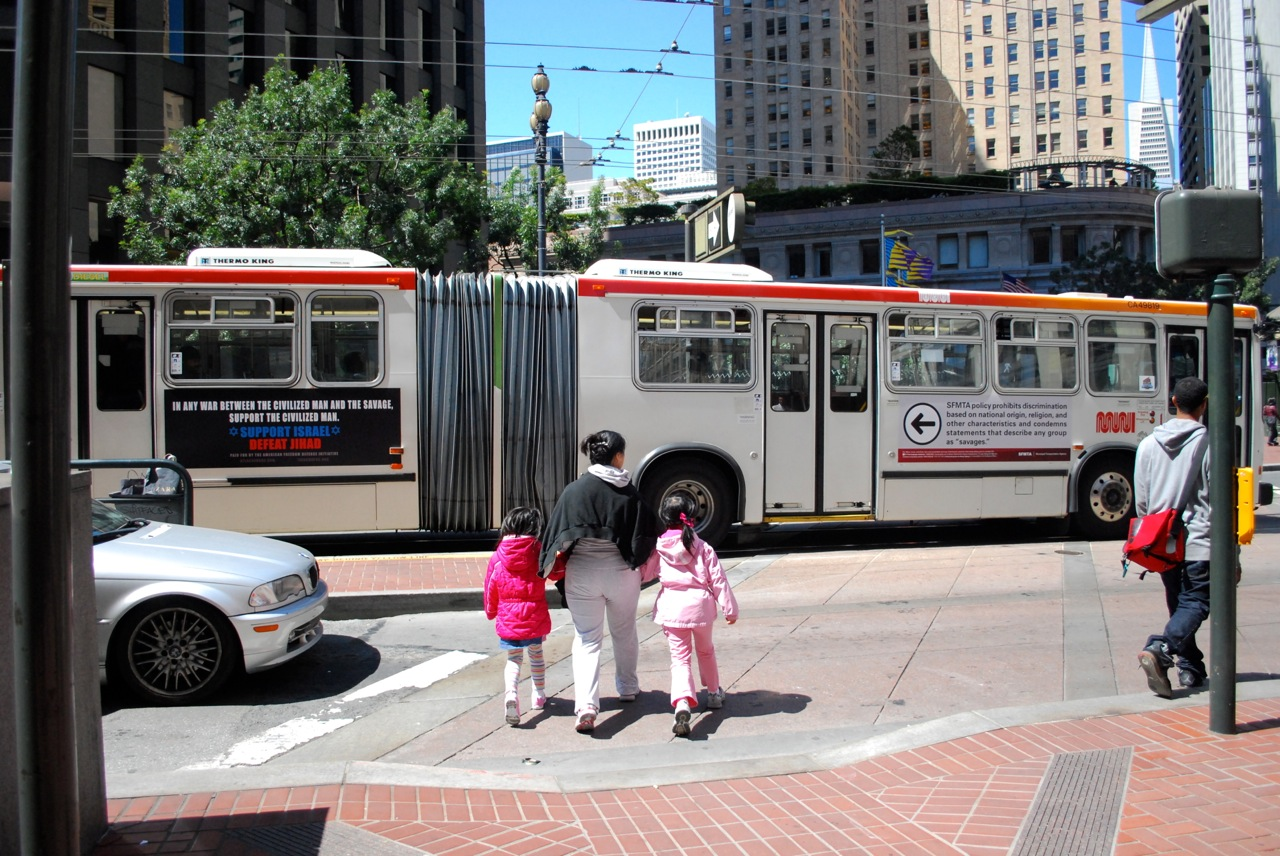 Muni spokesperson Paul Rose said: "Obviously we think the ads in place right now are repulsive and they definitely cross the line."  But, he added, "there's not a lot we can do in light of the First Amendment."

This is unprecedented in the history of outdoor advertising.  This is the manifestation ofsharia in Western society.  Any war on innocent civilians is savage.  They are reading the idea that "all Muslims" or "all Arabs" want to destroy Israel into my ad.  That is nowhere in my message.  Here again, they are the Islamophobes and racists, not I.

Meanwhile, the Hamas-linked Council on American-Islamic Relations (CAIR) is instructing the San Francisco city government to take the money that the city is donating (that is, the money generated from my ad) and use it to study the effects of this "hate speech" on the San Francisco population.

The Muslim Brotherhood groups don't even have to agitate anymore.  They can just sit back and watch these useful idiots and dhimmis do their work for them.

But what galls me are the scores of anti-Israel ads that ran without a disclaimer.  Why didn't they have a problem with the anti-Jewish ads?  San Francisco has run a number of anti-Israel ad campaigns.  Why did they not run this disclaimer next to those ads?  That silence is sanction and tacit approval.  Institutionalized anti-Semitism.  Who cares if Muni approves the message or not?  It is not their job to agree or disagree.

I am going to run new ads in San Francisco.  Those ads will be calling out the institutionalized and systemic anti-Semitism of the government of San Francisco.  They're clearly picking sides.  They should be running disclaimers on every ad, not just mine.

And so I am going to keep fighting for the freedom of speech.  The destroyers must not win this battle.  If they do, it will have repercussions far beyond these two ad campaigns.