But a new force arose in American politics in 2009 and 2010.  Calling themselves the "Tea Party," these people favored balanced budgets and pushed the Republican Party in that direction.  It turns out that the Tea Party adherents had the right idea.  For trade deficit countries like the United States, continued deficits provide little short-term benefit and large long-term risk.

But no party -- not the Democrats, not the Republicans, not even the Tea Party -- has yet figured out how to solve the unemployment problem.  Meanwhile, we just conducted a study of world statistics for all economies of at least $100 billion GDP from 2007 through 2011.  Our main finding is that balancing trade would provide a reduction of two percentage points in the U.S. unemployment rate.

We began our study by focusing on a basic prediction made by John Maynard Keynes which has been ignored by most economists.  In most of his 1936 book, The General Theory of Employment, Interest and Money, Keynes advocated government deficit spending to fight recessions, but in a chapter toward the end he discussed the danger of tolerating mercantilism, the trade strategy designed to produce trade surpluses in its practitioners and trade deficits in its victims.  Keynes wrote:

[A] favorable [trade] balance, provided it is not too large, will prove extremely stimulating; whilst an unfavorable balance may soon produce a state of persistent depression. (p. 338)

Recent examples seem to support this contention.  For example, in the current chart of the Eurozone below, as trade balances go up (the black line), unemployment tends to go down (the red line).  The countries with trade deficits (Greece, Portugal, Spain, Italy, and France) all have higher unemployment rates than the countries with trade surpluses (Austria, Germany, and the Netherlands): 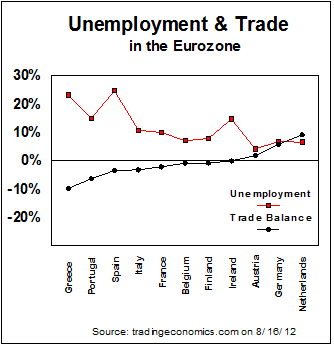 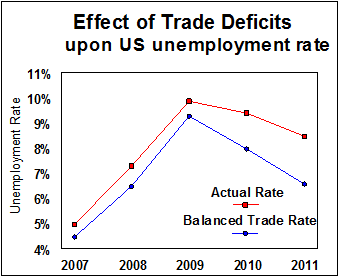 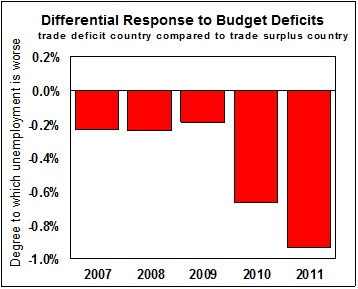 Our results clearly show that deficit spending is much less effective for trade-deficit countries than it is for trade-surplus countries.  If both increase their budget deficits by the same amount, then the unemployment rate of the trade=deficit country goes up, when compared to the unemployment rate of the trade-surplus country.  Without balanced trade, deficit spending is but a small defense against high unemployment.

In order to balance trade, an international political dimension must be addressed.  During World War II, Keynes tried to address it through international institutions.  He was Britain's negotiator at the Bretton Woods conference, which established the International Monetary Fund (IMF).  The last volume of his collected writings (Volume 25) is full of his plans for the fund, which was to enshrine balanced trade as its primary goal.

Under Keynes' proposals, the IMF would have been an "International Clearing Union" which would establish an international settlement currency and keep trade in balance.  Trade-surplus countries would have to take down their barriers to imports, stimulate their economies, and/or make loans to trade-deficit countries.  In contrast, trade-deficit countries would be allowed to use export subsidies, devaluations, import restrictions, and/or tariff barriers. 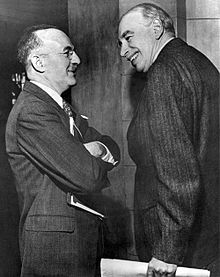 Unfortunately, Keynes was opposed at every turn of the Bretton Woods negotiations by chief U.S. negotiator Harry Dexter White, a Soviet spy in the U.S. Treasury Department.  White may have wished to weaken trade-deficit Britain so as to bring about a U.S.-Soviet partnership after World War II.  His own "International Stabilization Fund" proposal became the basis for the IMF.

Nevertheless, one bit of Keynes' intention was preserved in the IMF's articles of agreement.  Article IV requires that countries "avoid manipulating exchange rates or the international monetary system in order to prevent effective balance of payments adjustment or to gain an unfair competitive advantage over other members."  Unfortunately, the IMF bureaucracy never enforced this prohibition; Keynes' faith in international institutions was misplaced.

The 2008 depression was the direct result of a rise in Asian mercantilism which was and still is permitted by the IMF.  China, especially, has manipulated exchange rates in order to give its producers a competitive advantage in world markets.  The loans that it sent to trade-deficit countries, as a byproduct of its currency manipulations, fed house price bubbles in many of the trade-deficit countries.

By 2008, many consumers in the trade-deficit countries, including those in the United States and Southern Europe, had been indirectly borrowing so much from abroad to buy imports that they were no longer creditworthy.  Their large banks were awash in bad consumer debt.  After their governments bailed out their banks, their governments' credit ratings began to deteriorate.  To this day, large international trade deficits remain, and our analysis shows that they are strongly associated with continued high unemployment rates in the trade deficit countries.

One solution would be for the trade-deficit countries to require balanced trade through our invention, the WTO-legal Scaled Tariff, which could bring trade into balance for countries experiencing chronic trade deficits.

Only trade-deficit countries can be trusted to balance trade.  Doing so lets them reduce unemployment and increase growth rates.  Our statistical analysis suggests that they may have few other ways to do so.  Keynes may have been right when he wrote that persistent trade deficits "produce a state of persistent depression."

The authors maintain a blog at www.idealtaxes.com and co-authored the 2008 book Trading Away Our Future.  Dr. Jesse Richman is associate professor of political science at Old Dominion University.  Dr. Howard Richman teaches economics online.  Dr. Raymond Richman received his economics doctorate at the U. of Chicago from Milton Friedman.