Who's the Real Outsourcer: Romney or Obama?

The Obama campaign has been running a series of campaign ads which call Romney an "outsourcer."  These ads have been helping Obama's poll numbers versus Romney in the Midwest battleground states.

However, according to Glenn Kessler in the Washington Post ("4 Pinocchios for Obama's newest anti-Romney ad"), the most recent ad is "misleading, unfair and untrue."  For example, it claims that Romney routinely outsourced jobs while he was head of Bain capital, but the Obama campaign can cite only a single instance. Kessler writes:

The Obama campaign rests its case on three examples of Bain-controlled companies sending jobs overseas. But only one of the examples - involving Holson Burns Group - took place when Romney was actively managing Bain Capital.

Similarly, the Obama campaign claims that Romney outsourced jobs as governor of Massachusetts.  Again, this generalization is based upon a single instance.  Kessler writes:

The claim that Romney outsourced jobs as governor is equally overblown.

This concerns Romney's veto of a bill that would have prohibited Massachusetts from contracting with companies that outsourced the state's work to other countries. Lawmakers were especially concerned about a $160,000-a-month contract with Citigroup to operate a system of electronic food-stamp cards that included a customer phone service center in India.

On CNN last Sunday, Candy Crowley challenged one of Obama's campaign advisers on the campaign's decision to continue airing these ads, even though fact-checkers have found them false.  You can watch the interview on The Blaze (click here).

So why is the Obama campaign making a mountain out of this molehill?  Perhaps they are doing so in order to hide the real mountain.  President Obama has been outsourcing American jobs on a grand scale.  Take his lack of response to Chinese trade manipulations.

Under Obama's stewardship, Chinese factories sell to America freely with minimal restraint, but should American factories desire to sell their products to China, they face barrier after barrier.  By permitting this unequal trading arrangement, Obama prevents the 1.2 million American manufacturing jobs lost since October 2008 from coming back.

As we related in the May 9 American Thinker (click here), President Obama recently let the Chinese government raise tariffs upon GM's made-in-America large-engine cars from about 25% to about 47%.  As a result, even though GM is mainly owned by the U.S. government and by GM's unions, it agreed to build Cadillac factories in China and to give Cadillac's top-flight technology to its Chinese partner and competitor.  Why?  GM knew that it couldn't continue to sell American-made Cadillacs to the Chinese market.

The Chinese government also extorted electric car technology from GM, including its state-of-the-art battery technology, as a condition for producing and selling electric cars in China.  In effect, Obama is outsourcing technology that he took over from GM's American creditors when he "rescued" GM from bankruptcy.  As a result of his technology giveaways, not only do American workers lose jobs in the present, but they will continue to lose future jobs.

Similarly, by letting China place a 30% tariff on American-made excavators, Obama virtually forced Caterpillar, one of America's most efficient manufacturers, to build new small crawler factories in China and give technology to its Chinese partner in order to access the Chinese market, as we pointed out in the October 4, 2010 American Thinker (click here).

Then there are American meat products.  China lets in American grains, but not American meat.  It uses a variety of subterfuges to keep meat out, even a tariff of about 105.4% on chicken feet, claiming that America is dumping them on the Chinese market at a price lower than the U.S. price, as we pointed out in the Feb. 15, 2010 American Thinker (click here).

And tariffs are only one of the tools China uses to keep out American products.  China is manipulating the dollar-yuan exchange rate so that American products are estimated to be about 25% to 40% more expensive in China than they would otherwise be, and Chinese products are about 25% to 40% less expensive in the United States than they would otherwise be.

And the Chinese government also keeps American products away from its 1.3 billion people through government fiat.  In March 30, 2011 testimony before the U.S.-China Economic and Security Review Commission, Dr. Derek Scissors, a senior fellow at the Heritage Foundation, explained one of its methods:

In most sectors [of China's economy], there is no market of 1.3 billion. Instead, there is what is left after the SOEs [State Owned Enterprises] are handed the bulk. This applies, of course, to American companies looking to serve the Chinese market. It is no surprise that official data indicate the foreign investment share has plummeted in the past few years. The truncated market extends to U.S. exports. The various forms of subsidy provided to SOEs are far bigger barriers to American goods than the yuan's peg to the dollar. Subsidization has been and can be increased to offset currency changes.

The following chart tells the overall trade story through statistics.  Under Obama's stewardship, every month for the last 27 months, U.S. net exports (exports minus imports) in goods to China have fallen steadily due to the Chinese government keeping out made-in-America products.  Month after month, our trade deficit with China worsens, setting a new record: 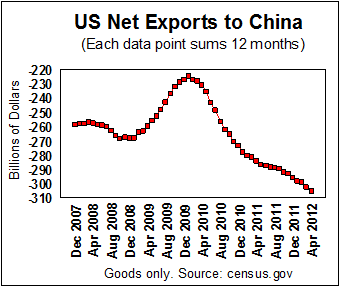 In terms of workers, negative net exports of $300 billion per year represent about 3 million productive American manufacturing jobs lost (assuming $100,000 product per worker).  Those jobs, in effect outsourced to China, could have come back to the United States had Obama required trade reciprocity by invoking the WTO rule for trade deficit countries that Nixon invoked when he imposed a trade-balancing tariff on August 15, 1971.

But instead, President Obama continued Clinton's and Bush's policy of giving away American manufacturing jobs to the trade-manipulating countries. Since January 2010, net exports to China have worsened by about $3 billion per month.  That's 30,000 middle-class manufacturing jobs that Obama has outsourced to China each month.  No wonder U.S. unemployment is still high!

Every once in a while, Obama takes a symbolic action in order to convince manufacturing workers that he is on their side.  For example, just before speaking at an AFL conference, he placed a temporary tariff on Chinese tires.  He also frequently files complaints at the WTO to protest China's more flagrant violations of WTO rules.  But he never takes any meaningful action.

He has always been two-faced on the trade issue.  During the 2008 presidential campaign he promised publicly that he would take on Chinese trade manipulations.  But behind closed doors, speaking to his outsourcing Silicon Valley campaign donors, he claimed that those who opposed Clinton's and Bush's trade policy were racists and xenophobes bitterly clinging to guns and religion.  Specifically:

And it's not surprising then they get bitter, they cling to guns or religion or antipathy toward people who aren't like them or anti-immigrant sentiment or anti-trade sentiment as a way to explain their frustrations.

Even while President Obama criticizes Romney for having outsourced a handful of jobs several decades ago, he continues to outsource 30,000 additional American manufacturing jobs to China each month, month after month.  In contrast, Romney promises to get tough with China starting on day one if he is elected.  It would be refreshing to have a president who talks the talk and walks the walk.  Such a person is long overdue.

The authors maintain a blog at www.idealtaxes.com, and co-authored the 2008 book Trading Away Our Future.  Dr. Raymond Richman is professor emeritus of public and international affairs at the U. of Pittsburgh.  He received his economics doctorate at the U. of Chicago from Milton Friedman.  Dr. Howard Richman teaches economics online.