Warning: mysqli_free_result() expects parameter 1 to be mysqli_result, bool given in /var/www/html/americanthinker/admin/common/functions/func.general.php on line 126
 What David Maraniss Left Out of The Story - American Thinker
|

What David Maraniss Left Out of The Story

In his book, Barack Obama: The Story, David Maraniss is remarkably detailed about things that have nothing to do with The Story (Betty Davis' opinion of a film, how a letter was handled in Kenya, what President Johnson said to Bill Moyers) but is inexplicably incurious about many things that are very important to The Story.

Maraniss, in an interview on the June 18 Today Show, stated that Barack Obama's book, Dreams from My Father, was "literature," adding, "There's a big difference between memoir and biography."  So big a difference that Ben Smith of Buzzfeed counted "38 instances in which the biographer [Maraniss] convincingly disputes significant elements of Obama's own story of his life and his family history."

Yet Maraniss continues to rely on Dreams for much of his narrative.  A case in point is the story of how Obama Sr. (going forward, "Obama") and Ann Dunham met in a Russian class.  Maraniss goes into elaborate detail as to why Obama would take a Russian class while ignoring the very real possibility that the whole story is hogwash.

Maraniss makes note of "Author Sally Jacobs" and "her vibrant study of Obama, The Other Barack."  On page 112 of her book, there is a footnote: "Barack Obama's transcript from the University of Hawaii, Syracuse University, Frank C. Laubach Collection."  These transcripts would show if Obama ever enrolled in a Russian class.  However, the reading room supervisor of the Laubach Collection, Nicole Dittrich, has advised me that "Obama Sr.'s Hawaii transcript is currently missing from our collection."  Maraniss makes no mention of the missing transcripts.  He also makes no mention of Janny Scott's assertion in A Singular Woman that a friend "said he remembered Ann saying she had met Obama in the University Library."  Maraniss does mention Obama's curriculum vitae that showed he spoke "Luo, Swahilli and English," but he explains away the omission of Russian by saying, "He had not followed through in Russian enough to become fluent."

Then there is the issue of whom Ann dated in high school.  Maraniss quotes Ann's high school girlfriend, Susan Botkin Blake: "She dated a couple of guys from off the island.  She looked beyond the white boys with crew cuts who were prevalent in our class."  Maraniss comments, "It is typical that she [Ann] would look outside her set for romance."  An interesting post on the "Classmates" website by Phillip Lipson and responded to by Ann's classmate Joelle Hannum gives credibility to Maraniss' contention.  Lipson was "assisting David Maraniss Washington Post journalist who is writing a book on Barack Obama."  Hannum, in responding to Lipson, wrote, "I can remember the rumors about her and another class-mate who were involved with and married African-American men."  Did Ann date African-American men in high school?  Maraniss shuts the door on that possibility, writing, "Dating someone of an even darker [than Italian] skin was implausible if not unthinkable."  But why? 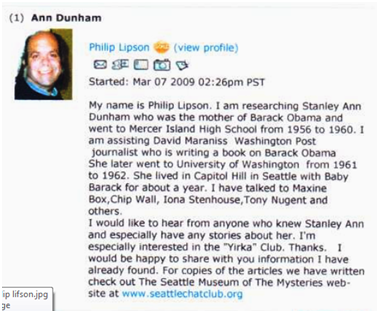 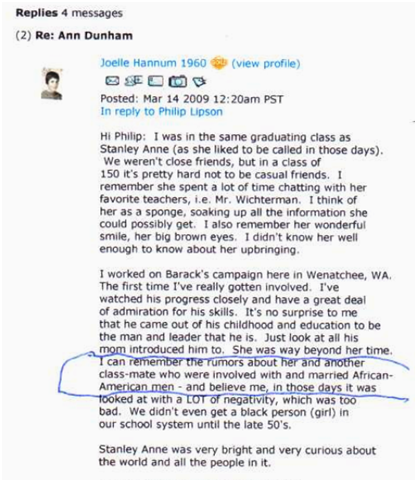 Maraniss, knowingly or not, opens up a mystery heretofore unexamined.  Mentioning the birth notice that appeared in the Star-Bulletin, he states that it identified "Mr. and Mrs. Barack H. Obama" at a home address of "6085 Kalanianaole Highway."  Maraniss adds, "But she and Obama and the infant never lived there."  He goes on to say, "Only a few days after the boy was born, the father had to fill out immigration papers to extend his student visa.  The residence he listed on those papers was 1704 Punahou Street, apartment 15."

Maraniss has this all wrong.  The immigration papers listing the 1704 Punahou Street address were filled out on March 3, 1961, long before a child was born.  The next time Obama listed his address on an immigration document was on August 31, 1961.  The address given was 1482 Alencastre Street.

We don't know when Obama took up residence on Alencastre Street, but we do know from a memo, also written on August 31 by William Wood, that Ann and child were not living with him.  The memo also confirmed Obama's residence on Alencastre.  Maraniss interviewed Robert Ruenitz, an East-West Center student who visited Obama at his Alencastre address.  "I could see no sign of other inhabitants, it was monastic at best," said Ruenitz.  "A study table and a bed and a light."  The mystery, then, is if Ann and child did not live with Obama, and they did not live with her parents, where did they live before moving to Seattle in late August 1961?

Maraniss writes, "Of all the chapters in the lives of these two human beings, the time they were together is historically the most important and personally the most obscure, a brief point of confluence with few witnesses or supporting documents."  During this time, there are no pictures of Obama Sr. and Ann Dunham together.  There is, however, a group picture showing a smiling Stanley Dunham, Ann's father, with his arm around his smiling son-in-law.  An incurious Maraniss never mentions this picture even though he had the means to comprehend its meaning.

Students from the East-West Center, who were friends of Obama, some of whom Maraniss interviewed for his book, appear in the group photo as well, as in pictures from some of their many gatherings.  Since we know that many of these students did not come to the East-West Center until September 1961, the group picture had to have been taken after Ann and child had left Obama for Seattle in late August 1961.

Maraniss gives two explanations for Ann's abrupt departure.  The first: "She was married to a bigamist, and the probability is that around the time of Barry's birth the lie burdened the relationship so much that she had to flee from under its weight."  The second: "There is one other possible provocation, an uglier one: spousal abuse."  Neither explanation fits what we see in the picture -- namely, a smiling Obama with Ann's beaming father.

An inquiring Maraniss could have learned from the East-West students he interviewed what the relationship between Obama and Stan Dunham was like, where the picture was taken, who else was in the picture, who took the picture, and what was the occasion.  Instead, he remains incurious. 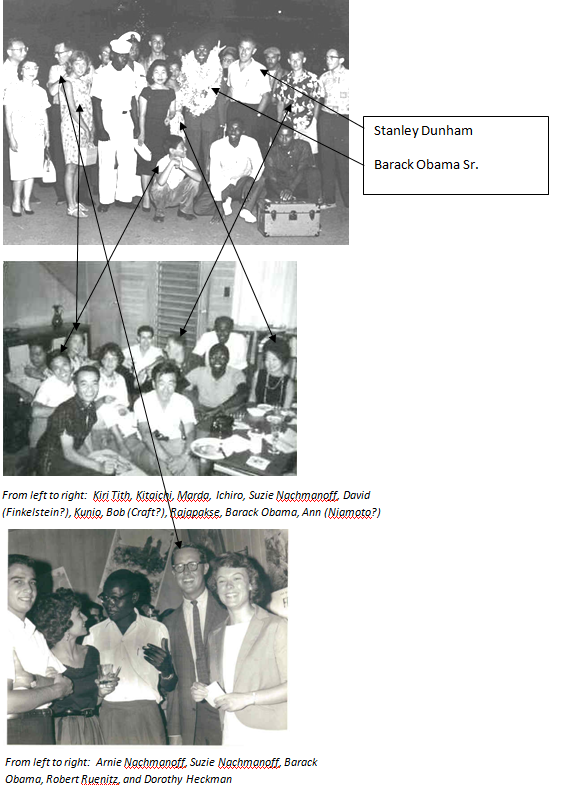 There are other examples of Maraniss' willful lack of curiosity.  For example, he accepts Susan Botkin Blake's dubious contention that Ann sent her letters about meeting and falling in love with Obama without producing the letters themselves.  Just one page later, while talking about how Ann's and Obama's families reacted to their marriage, the ever-careful historian Maraniss wrote, "Either version is plausible, but questionable without evidence of the letters themselves."  Why, then, no curiosity about Susan's supposed letters?

Maraniss goes into great detail explaining the II at the end of the baby's official name, Barack Hussein Obama II.  He notes, "The father must have liked the ring of it," but he fails to mention that in Obama's immigration documents, he misidentifies his presumed child as "Barack Obama 2nd" and gives his address as "c/o Univ of Hawaii."  Obviously a very caring father!

Maraniss twice states that Obama's age was 26 in the early months of 1961.  His birthday was June 18.  This would have made him 27 on August 4, when the baby was born.  Yet the official birth certificate lists Obama's age as 25.  Maraniss gives no explanation for the discrepancy.

Maraniss told David Gregory on the Today Show, "I just wanted to get the story right."  Though he must be credited with correcting 38 "elements of Obama's own story," it appears there is much more that a reporter who did not fear the truth could have fleshed out.