Warning: mysqli_free_result() expects parameter 1 to be mysqli_result, bool given in /var/www/html/americanthinker/admin/common/functions/func.general.php on line 126
 The Norwegian 'Miracle' - American Thinker
|

Liberals love Norway (for example, see this).  First, it is a European country.  Second, it is a liberal country; it gives out the Nobel Peace Prize.  Third, it is considered a welfare state, maybe even a socialist one.  In 2011 its tax revenues were 57% of its GDP, the highest of all advanced economies.

And fourth, and what liberals really love about it, it beats the U.S. in multiple economic categories.  In fact, Norway is one of the richest countries around.  Its GDP per capita was 10% more than the U.S.'s in 2011.  Its net government debt was a negative 168% of GDP.  That is, it is one of the few countries with no net debt at all, but instead a huge surplus.

(By the way, I find the following amusing.  In 2011 Greece's net government debt was equivalent to about $430 billion.  Norway's surplus was about $745B.  If Norway would simply take about half of its surplus and hand it to Greece, Greece would be completely bailed out of debt!  Yet the EU is badgering debt-ridden Germany, whose net debt is 56% of GDP, to do it.  Norway had the good sense to stay out of the EU.)

But getting back to why liberals love Norway, it is because they can use it to bang conservatives over the head.  It is a high-tax state, yet it is richer than us.  And since about 1988, its economy has grown just as fast as the U.S.'s. Yet not only does it have no debt, but it has a surplus.  "All your free-market arguments are belong to us!"

Let me bring that down to earth.  First, Norway's population is about 4.7 million, or about the same South Carolina's, or a bit more than half of New York City's.  That population is at least 98% white, and almost all of that is Norwegian.  It is also about 90% Christian.  About four out of five Norwegians live in cities, with almost one in five living in Oslo itself.

But perhaps the two charts below might give us some insight into Norway's economic success. 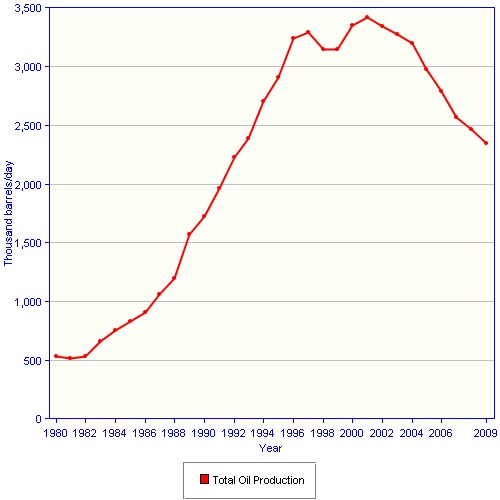 It just so happens that Norway's success over recent decades coincided rather nicely with two explosions: North Sea oil production and oil prices.

Even on an absolute scale, Norway is a huge exporter of oil.  In fact, it is the 5th-biggest oil exporter in the world.  Bigger than Iraq.  Bigger than Kuwait.  And Canada.  And the U.S.  And Venezuela.  It is behind only Saudi Arabia, Russia, Iran, and the UAE.  And remember, its total population is about the same as Saudi Arabia's second-largest city, Jeddah.

And where does good little liberal Norway get that oil?  From drilling in the ocean.  Most of its oil was drilled in the North Sea.  You know, offshore, like the U.S. used to do in the Gulf of Mexico, but won't do on either the Pacific or Atlantic coasts.

I think of Norway as the Bono of countries.  It likes to preach to the rest of us how to be good citizens of the world.  In the meantime, it makes money hand-over-fist by being one of the biggest of the Big Oil gorillas.  It drills for it.  It drills for it in the ocean.  It sells it.  It owns a major oil company.  It increases its carbon footprint while the rest of Europe shrinks its own.

Liberal Norway-lovers don't like to advertise these parts of Norway's policies: slimming down its government, regressive taxes (not even flat), being part of Big Oil.

So the simple-minded story is that Norway is some great socialist state yet its economy is humming along just nicely.  Let me summarize its real keys to prosperity.

And while the U.S. government is "investing" in high-speed rail, solar energy, wind energy, etc., look at this Statoil website to see where Norway put its money.  (Norway owns 67% of Statoil's stock.)

A note on sources: Most of the data above were pulled from one of two sources: the CIA World Factbook or the IMF's April 2012 World Economic Outlook Database.  Feel free to check my numbers.