Warning: mysqli_free_result() expects parameter 1 to be mysqli_result, bool given in /var/www/html/americanthinker/admin/common/functions/func.general.php on line 126
 Is Obama Ripping Off the Mask? - American Thinker
|

Is Obama Ripping Off the Mask?

American candidates for president have a predictable trajectory.  They begin by telling the party troops that they are really coming from the honest-to-gosh right or left, and then they move steadily toward the great fuzzy middle, so that by election time they end up sounding like Tweedle-Dum and Tweedle-Dee.

But Obama has been going off the standard script -- most recently by attacking capitalism in radical terms.  Namely, "If you've got a business -- you didn't build that.  Somebody else made that happen."

Last week, an Obama surrogate was accusing Mitt Romney of being a felon.

This is a new low in presidential hardball politics -- at least since LBJ accused Barry Goldwater of wanting to explode nuclear weapons on little girls picking daisies.

Is any of this (use of tax havens) actually illegal?

It appears not, but it's impossible to know for sure because Romney refuses to release enough information to let people make their own judgments.

... Last time I checked,  ...  there is a presumption of innocence[.] But Obama needs no evidence. He just needs innuendo.

"And when did you stop beating your wife?" to quote the old legal joke.  But this is not a joke.

If Breitbart is right, the Obama campaign is actually raising money in China -- quite possibly from non-U.S. citizens, since its controls are lax.  Not a legal move, even if it's ignored by the Federal Election Commission.

The Obama campaign may be committing felonies while accusing others of being felons.  Hardball politics isn't new, but crazy hardball tends to be self-defeating.  It reflects rage and desperation rather than cold calculations.  Obama now seems to be playing crazy ball.

In 2008, Obama ran as a messianic figure, come to bring peace and love to earth.  But in 2012 he is tearing off the mask bequeathed by Saul Alinsky and his other radical left mentors.

I think there might be two reasons.  First, Obama really is an ideological radical -- there's no honest doubt about it anymore, given his expressed anti-capitalist and anti-constitutionalist views, his solid phalanx of radical associates throughout life, and his repeated assault on everyday Americans.  And while Obama is the most convincing liar since Bill Clinton, he has essentially given up on hiding his radicalism.

That is hugely important. 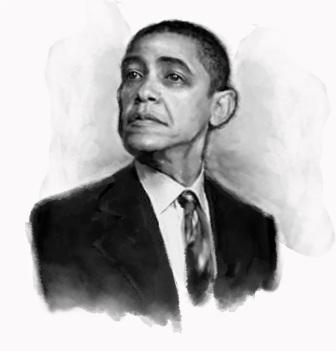 A second reason why Obama seems to be wandering off script is his genuine rage and anger toward those who dissent from his radical orthodoxy.  Early in his administration, Obama gave one of those televised White House seminars on the economy. Congressman Paul Ryan was there, and instead of listening obediently, the way Republicans are supposed to, he presented a clear and articulate argument against federal overspending.  Obama was caught unprepared, and right there on live TV, he suddenly looked enraged.  That used-car salesman smile was gone.  For a moment, we could see the man behind the Carteresque grin.  He didn't look kind and compassionate.

You can bet that Vladimir Putin and Hu Jin Tao played and replayed that clip over and over again to see the real Obama.  All the novice KGB thugs are being trained on this one.

(Look at this photo of Obama's soulmate, Elizabeth Warren, and you can see the identical rage.)

The Daily Kos loves this collectivist Obama stuff.  But the Kosovars are already in his back pocket.  Why is Obama echoing the mad-dog left three and a half months before November?

One reason could be money.  The Great O is far behind his money-raising record from 2007 and 2008.  But in 2008, Obama kept his real feelings for the private delight of behind-the-scene fund-raisers.

Right now Obama's denial of business achievements is on the White House website (above).  Americans who don't hate business (70-80 percent) are not comfortable with those words.  If the people in the Romney campaign are smart, they'll run that one over and over toward November.  Add a few occupistas running wild in business districts around the country, and they will add Obama's smiling endorsement of those idealistic kids, just to hammer the point home.  Obama is his own worst enemy.

In his heart of hearts, President O is always enraged at the American people -- those bitter clingers -- but this time it's personal.  Gone is the smiling messiah, and in his place we see a persecutory personality, a real witch-hunter who may lose the election but won't pass up a chance to scourge this country with the whip of righteousness, to tell us what he really thinks.  Under the smiling mask, Obama is Rev. Jerry Wright.

By Labor Day, when all the football fans and SUV moms take their eyes of the TV, they will see it, too.

If Obama doesn't hammer his rage and anger home to the voters, Romney should do it for him.  This is self-destructive strategy.  You don't end a campaign by ranting at the voters.

Obama is not a conventional politician.  For sure, he loves the trappings, Air Force One, the chance to finally lord it over other people.  But Obama is dyed-in-the-wool ideologue.  In the last four years he's changed everything except his deeply embedded beliefs.  America is still the real enemy.

Obama has become Jimmy Carter, who's gotten more and more stuck in trying to justify his catastrophic policies from 30 years ago.

Jimmy Carter is still trying to be president.  Emotionally, he can't come to terms with his defeat in 1978.  That's why he can't leave the public stage, or stop defending his defeatist policies toward the most hardened enemies of this country.

If Obama is defeated in this election, chances are that he will become another Jimmy Carter -- a "bitter clinger" if ever there was one.

The left has always thought long-term.  Radical leftism is a utopian ideology, not a normal American political party.  The left wants to turn America upside-down -- the original meaning of "revolution," from Copernicus' book on the rotation (revolving) of the earth

So far, America is still rightside-up, but Obama won't stop if he is defeated.  On the contrary.  To keep his stuck beliefs intact, Obama will have to redouble his missionary efforts.

If that happens, Obama the "bitter clinger" will haunt the Democratic Party 'til the end of his days.

Which would be a kind of poetic justice.