How Statists Are Getting Away with It

Conservatives often warn that the sky will fall if the next piece of liberal legislation becomes law.  Liberals retort that conservatives are always warning about an Armageddon that never shows up.

Two general arguments of liberals go something like this.

Actually, they both are right.  Government does smother growth, for example.  But it does so slowly and incrementally, making it difficult for the average person to notice from day to day or year to year.  Armageddon never comes.  We don't go over some "cliff."

Because of this, statists have been able to get away with growing government without alarming the populace.  To the average voter, government grows a bit every year, yet things get a little better every year (on average, over time), so there must not be a conflict.  In fact, many believe that more government caused the improvement.

I can explain all this in fairly precise terms -- an equation, in fact.

"Growth" is the annual percentage growth rate of real GDP, and "Spending" is total government spending as a percent of GDP.

Let me first justify this equation and then explore its ramifications.

One way to justify something is to cite authority.  Two Swedish economists, Andreas Bergh and Magnus Henrekson, looked at several studies of the effect of government size on economic growth.

The literature on the relationship between the size of government and economic growth is full of seemingly contradictory findings.  This conflict is largely explained by variations in definitions and the countries studied.  An alternative approach-of limiting the focus to studies of the relationship in rich countries, measuring government size as total taxes or total expenditure relative to GDP and relying on panel data estimations with variation over time-reveals a more consistent picture.  The most recent studies find a significant negative correlation: An increase in government size by 10 percentage points is associated with a 0.5 to 1 percent lower annual growth rate. [My emphasis.]

The equation I gave above is consistent with this latter number: if government increases by 10% of GDP, then the real growth rate is reduced by one percentage point.

Another way to justify something is with facts.  The graph below plots real GDP growth vs.  government spending (as % of GDP) for all "advanced economies" for all years for which the International Monetary Fund has data. 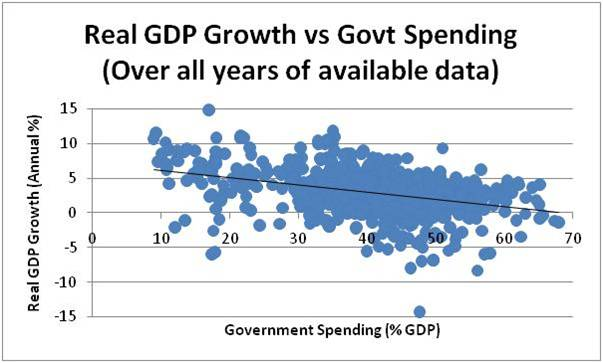 The dark line in this chart is the linear regression line, and it approximately represents the equation I gave above.  (More exactly, it is Growth = 7.165058 - 0.10518 X Spending.)  This negative correlation between government spending and government growth is statistically significant.

We get a chart similar to the one above even if we take averages for each country.  In the chart below, each point is a country, using the average values over the years for which the IMF has data.  Again, the downward slope is statistically significant.  (In this case, the equation is Growth = 6.348661 - 0.08472 X Spending.) 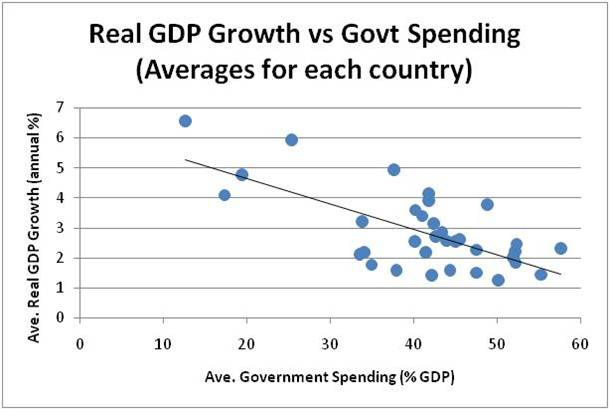 It is true that some countries grow faster than the linear regression line would indicate, and some slower.  But this simple regression analysis says government spending explains almost half of the growth rate.

If you believe my equation, it vindicates conservatives: bigger government stifles growth.  Yet it also vindicates statists: a government would need to spend 70% of GDP to stop growth altogether, and a government that takes half of everything could still grow about 2% per year.  That is not exactly a gang-busting rate, but a lot of countries would be happy with 2% right now.

If we take away the four Asian Tigers of Hong Kong, Korea, Singapore, and Taiwan, the other advanced economies spent between 35% (Switzerland) and 56% (France) of their GDPs in 2011.  Per my equation, the growth rates should be between 1.4% and 3.5% per year.

Why should Average Joe Voter care whether GDP grows 1.4% or 3.5%, especially if he thinks he's getting some good things from government like roads, schools, health care, and more equally spread wealth?  The difference between 1.4% and 3.5% doesn't seem like a big deal.

I would ask Joe Voter to bear with me as we discuss a thing called compound interest.  Let's take two countries, A and B.  A's GDP grows 1.4% per year, and B's grows 3.5% per year.  Let's say both have the same GDP in year zero.

In 20 years, country A would be 32% more wealthy than it started.  Its citizens would have seen progress and wealth growth.  If they had no one to compare themselves to, they might think things were swell.

But statists have a solution to this: try to get all countries to grow at the same rate.  In that way, Average Joe Voter would not notice that he is less wealthy than he could have been.  All he knows is that he is wealthier than he used to be.

Get it?  If statists can get all governments to spend about half their GDPs, then growth would be about 2% per year for everyone.  If countries A and B both started out the same and both followed that formula, both would be 49% wealthier in 20 years and still equal to each other.  They would feel richer (and they would be), yet they would not envy each other's wealth.

But they would not be aware of what could have been.  If they would spend like Hong Kong or Singapore, they would be 165% more wealthy in 20 years, not just 49%.  And that is a big difference, akin to the difference between the Czech Republic and the U.S. today.

This inability of a population to be aware of what could have been helps statists and tyrants stay in business (rather, in government).

I would say that this is exactly what is happening today, whether by design or some kind of spontaneous order.  In 2011, with the four Asian Tigers removed, the 30 governments of the advanced economies spent an average of 46% of GDP.  In a previous article, I calculated that government maximizes revenue at a taxing level of 44% of GDP.

This convergence of Western democracies to a government size near 45% of GDP seems all too perfect.  It is about where government maximizes its true revenue.  It is about where GDP can grow at a tolerable 2.5% annual rate.  And if all countries do it together (à la the European Union), no one will be the wiser about what could have been.

If our statists can be patient and accept incrementalism as a strategy, they can convince enough people enough of the time that conservatives are unnecessarily alarmist, that economic growth is compatible with big government, and that things are actually getting better, probably because of big government.

In the meantime, they'll be taking about half of everything, and you won't know you could have been a lot better off without them.

It's an awesome strategy.  It's about 80 years old now, and working like a charm.

A note on sources.  All the raw data from above were from the IMF's April 2012 World Economic Outlook Database.  The series used were (1) Gross Domestic Product, constant prices, percent change; (2) General government total expenditure, percent of GDP; and (3) Gross domestic product based on purchasing-power-parity (PPP) per capita GDP, Current international dollar.  All regression analyses were done with built-in Excel spreadsheet functions.