The American public may be about to do something it has not done in 88 years: elect a former governor of Massachusetts as president of the United States.  In anticipation of this election, we can only hope that some of Governor  Romney's advisors will introduce him to his predecessor,  Governor Calvin Coolidge.

Coolidge was one of the most popular presidents in U.S. history, but historians have tended to underestimate his importance.  However, with the advent of Reagan and the revival of conservatism, Coolidge's place in history has been re-appraised.  Historian Paul Johnson has called Coolidge "[t]he most internally consistent and single minded of modern American presidents."  Amity Shlaes has written recently that Coolidge believed his first obligation was "to do no harm. His no harm rule came out of strength of character. By holding back, Coolidge believed he sustained stability, so that citizens knew what to expect from their government."  Perhaps one of Coolidge's own supporters best summarized his record: "Coolidge never wasted any time, never wasted any words, and never wasted any public money."

Before meeting his predecessor, Romney might well consider the following Coolidge administration  accomplishments:

There are some very important lessons that Mitt could learn from Silent Cal.  First and foremost, Coolidge was a man of character who embodied the classic New England virtues upon which the Republic was founded: hard work, independent thinking ("common sense" as he called it), lack of pretense, sense of duty, perseverance, scrupulous honesty -- in other words, the bedrock on which Coolidge had been raised in rural Vermont and on which he built his political career.  The 1920s made for a decade of rapid social change, but Coolidge's somewhat old-fashioned virtues resonated with the American public.

How could such a seemingly simple man as Coolidge, who adhered so closely to traditional virtues and conservative, Jeffersonian government, have captured the respect, admiration, and even affection of 20th-century America?  After pondering the Coolidge phenomenon for eight years, Walter Lippmann finally concluded near the end of Coolidge's tenure, "Americans feel, I think, that they are stern, ascetic and devoted to plain living because they vote for a man who is."

Perhaps that is still the case, Governor Romney.

Coolidge believed that the role of government was appropriately limited by the Constitution and was convinced of the creative power of individual initiative.  Like Jefferson, Coolidge harbored a very healthy distrust of government and a strong conviction that government was appropriately limited by the Constitution.  He wanted "the people of America to be able to work less for the government and more for themselves. I want them to have the rewards of their own industry. That is the chief meaning of freedom."  He consistently resisted progressive efforts to expand the reach of government, and he understood it was a moral -- as well as an economic -- issue: "I favor a government policy of economy not because I wish to save money but because I wish to save people."  He deplored the dependency which accompanies expanded government.

As Arthur Brooks, president of the American Enterprise Institute, wrote recently in National Review,  "[t]his is America's road to serfdom. No death squads or goose-stepping thugs, just one little compromise after another to the free enterprise system. Each one sounds sort of appealing, and no single one is enough to bring down the system. But add them all up, and here we are, on our way to becoming Greece. There's only one kind of argument that will shake people awake: a moral one."  Our current state of affairs would no doubt evoke moral indignation from Coolidge.

It may surprise Governor Romney to know that supply-side economics did not, in fact, begin with Arthur Laffer and Ronald Reagan, but rather with Calvin Coolidge and Andrew Mellon.  Coolidge termed high taxes "a species of legalized larceny," and he knew that the creation of jobs comes from the private sector, not from government.  As Coolidge simultaneously slashed top income tax rates from 77% to 24% and reduced government spending by over 35%, GNP grew at the fastest rate ever recorded for any eight year period in U. S. history.

As the public well knows, Governor Romney has had a distinguished career in business and earned a reputation as a "fixer."  Coolidge's realistic appreciation of the limits of constitutional government will probably sound rather counterintuitive to an inveterate fixer like Romney, but Romney would be well-served to consider its merit.  Coolidge's secretary of commerce and successor as president was Herbert Hoover, a highly accomplished businessman with a penchant for fixing everything.  Referring disparagingly to Hoover as "Wonder Boy," Coolidge offered him this advice: "If you see then troubles coming down the road, you can be sure that nine will run into the ditch before they reach you, and you have to battle with only one of them."  Coolidge was careful never to propose laws or regulation to address problems that would be sorted out more efficiently in the free market.

Now, lest Governor Romney mistakenly conclude that his predecessor was chronically inactive, he should explore how Coolidge did in fact deal with a few of the one in ten troubles that did not fall into the ditch.  In 1919, as governor of Massachusetts, Coolidge was confronted with a bitter police strike in Boston.  He labored for weeks to avoid a showdown, but when the police union leaders called a strike, he acted decisively.  He issued the following terse statement that resonated around the country, swiftly ended the strike, and catapulted him onto the national stage: "There is no right to strike against the public safety by anybody, anytime, anywhere."

President Reagan cited these words sixty-one years later when he acted similarly in the air controllers' strike.  Coolidge did not require public opinion poll to tell him what to think or how to act when action was necessary (nor did Reagan).

Finally, on a personal dimension, Coolidge was a politician of civility, and he also possessed a well-developed sense of humor.  One of his guiding principles was "I will not attack an individual" -- and he didn't.  Candidate Romney should concentrate on President Obama's record, while heeding Coolidge's admonition to avoid attacking the individual. 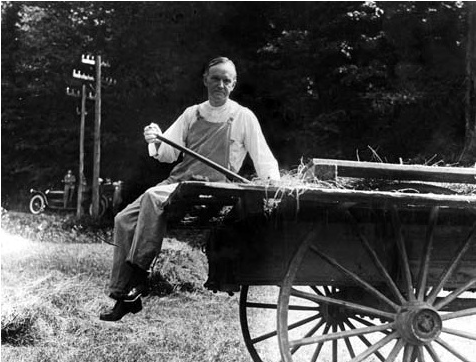 Somewhat surprisingly, Coolidge was famous in his day for humorous one-liners.  His humor was often self-deprecating and showed a keen sense of awareness of human limitations and foibles.  To the society matron whose husband had wagered that she could not get the president to utter more than two words, he replied, with a wink, "You lose."  Returning home from church one Sunday, Coolidge was asked by his wife, "What was the sermon about?"  He replied, "Sin."

"Well, what did the preacher say about sin?" she asked.  "He was against it," Coolidge replied.  At the end of his term, Coolidge observed to the press corps, "I have found in the course of a long public life that the things I did not say never hurt me."

Coolidge was one of our most photographed presidents.  He delighted in striking rather ridiculous poses -- e.g., donning full Indian headdress, fly-fishing in a three-piece suit, pitching hay on the farm in a "farmer's smock" and wingtips.  The public seemed to appreciate that he never took himself too seriously.

Today, the country is desperate for a president with character, vision, discipline, common sense, civility, and humor.  So, before entering the White House, Governor Romney, please meet Governor Coolidge.

Garland S. Tucker III is president of a NYSE-listed specialty finance company and author of The High of American Conservatism - Davis, Coolidge and the 1924 Election (Emerald Book Company, 2010).