Warning: mysqli_free_result() expects parameter 1 to be mysqli_result, bool given in /var/www/html/americanthinker/admin/common/functions/func.general.php on line 126
 Thermodynamics of Global Warming - American Thinker
|

What percentage change in global mean temperature (GMT) has occurred since the Industrial Revolution began?  This can be calculated only by using an absolute temperature scale.  Answer = +0.3%.

Can this be so alarming to Al Gore?  Indeed, the Kelvin absolute scale for temperature is one of only seven basic units of measure recognized in the International System of Units.  Temperature measures the heat content of a substance -- a simple linear relation so long as the zero of the temperature scale is properly placed.  Heat itself is a form of energy measured in joules, calories, or BTUs.  The thermodynamic science of heat flow requires the use of Kelvin because Kelvin eliminates the problem of negative temperature readings encountered with the Celsius or Fahrenheit scales.  Heat can flow into and out of any mass, be it solid, liquid, or gas.  Reduction of heat makes it colder.  There is no such thing as negative heat (anti-heat?).  Therefore, negative temperature conveys no meaning, either.

Absolute zero temperature occurs at -273.15º C, or -491.67º F, and signifies a state of matter displaying complete absence of heat.  The PBS NOVA television program broadcast an excellent introduction to the science of cryogenics and its fascinating history.  Anders Celsius invented his centigrade scale in the late 18th century.  Zero of Celsius scale is the temperature of ice-water (32º F), while 100º C is the boiling point (212º F) of water at sea level -- both chosen by Celsius because they are easily reproduced as experimental temperature calibration standards in laboratories around the world.  In 1848, Lord Kelvin invented his eponymous thermodynamic temperature scale which employs the same "degree" as the Celsius scale but shifts the zero point to absolute zero1.  Therefore, any temperature value recorded in Celsius can be easily converted to Kelvin just by adding 273.15.

This measurement scale vastly simplifies the mathematics of, for example, equations of state for an ideal compressible permanent gas such as air (Figure 1).  These are the same equations that govern the evolution of the climate and necessarily are at the heart of any computer-numerical algorithms developed for climate modeling. 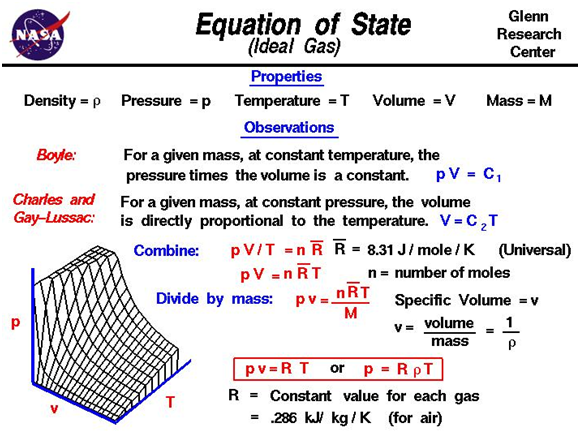 Figure 1:  Equations of State for air and other gases.  T = Absolute temperature (K)

Global Warming: The common use of the Celsius scale in reports of "Climate Change" is therefore improper.  This misapplication obscures essential information conveyed by the Thermodynamic Temperature scale.  As illustrated in Figures 2 -- reproduced from MIT Prof. Richard Lindzen's presentation to the British Parliament -- global mean temperature (GMT) is approx. 0ºC ≈ 273 K; I have added the Kelvin scale in red at the left of Figure 2 for proper comparison.  When looking at the original plot of GMT Anomalies in Celsius in Figure 2, one can't help but see the false impression of GMT oscillating with large percentage swings around a mean value somewhere near zero.  It should be no surprise, with oceans consisting substantially of ice-water, that the GMT is circa 0ºC -- arbitrarily defined as the temp of ice-water.  Properly replotted in Figure 3, these small fluctuations of order 0.1 K oscillating somewhere around value of 273 K look like a very straight line -- hardly alarming at all! 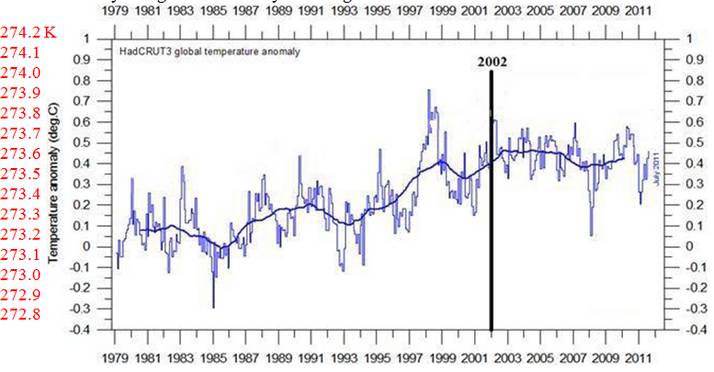 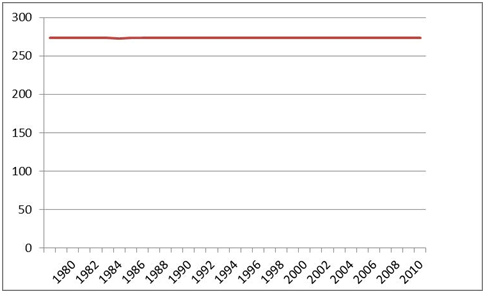 1A mathematical simplification akin to the one that occurs in calculating planetary orbits when Copernicus  correctly placed the zero-point (center) of the solar system at the sun.