The Wintour of Our Discontent

Back at my favorite boîte, in a dark  back  booth I was scanning the news clips of the week and watching TV while waiting for lunch.  Greg Gutfeld's take on the Wisconsin recall election made me laugh out loud:

"The media wanted Norma Rae, and got On the Waterfront, instead."

The entire week was full of things like this, signs of a campaign on the rocks.

Even before the Wisconsin drubbing ,the campaign damaged itself by running the video ad by Vogue editor Anna (The Devil Wears Prada) Wintour, soliciting contributions  to a fundraising dinner for Obama. 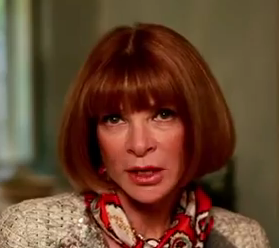 In a very upper class British accent, wearing thousands of dollars worth of couture garb and stylishly, which is to say expensively, groomed, Wintour's suggestion that she, her co-host  Sex and the City's Sarah Jessica Parker and those paying thousands of dollars to attend were just thrilled at the thought of sitting next to and listening to  a nobody who won a place at the table by a lucky $3 bet in the lottery was  parody fodder.

Iowahawk archly summed it up in one of his tweets:

"Rejoice, you bitter clingy filthy flyover hillbillies. Thanks to the Obama campaign, you finally have a chance to live the dream of every American: rubbing elbows with chic lefty fashionistas. Desiccated Eurotrash Vogue editor Anna Wintour explains it for you in what will go down in history as the WORST CAMPAIGN AD EVER."

The GOP, as I had hoped it would, quickly responded with a counter ad, "Meanwhile," which ran the Wintour ad in the background and reminded the viewers that the jobless figure keeps rising and on the very day the most recent and worst jobs report came out, Obama attended SIX fundraisers.

MOTUS detailed the Obamas' schedule on a typical day and it's clear the only job they care about saving is the President's.   They are in a desperate scramble for both money and votes.

"I have it on good word from the secret Romney Axis of Evil HQ that the next Obama ads are going to feature Alec Baldwin touting a seat on AF One, Michael Moore offering a bit role in his next fauxcumentary and Paris Hilton offering a ride in her limousine to the next White House soiree."

By chance, the same Democratic biggies who were in the restaurant last week, slid into the booth next to mine just as my meal arrived. They'd obviously been drinking at the bar before the table was ready for them because they were speaking even more loudly than usual and were completely unguarded.

"The White House is killing us. Killing us. One stupid move after another,"

"Clinton worked damned hard to get us out from under  the Tax and Spend party label and now that dope has it padlocked tight  round our neck again."

"Ed Rendell and Bill Clinton can hardly contain themselves. They've practically joined the Romney campaign. If only it wasn't too late to dump him."

"What has he done right? In my part of the country after he put the kibosh on Keystone I couldn't even buy him votes."

"Remember when they met with us and told us not to worry? They had it under control. ..they were going to bump off Rush with Air America." (A loud groan escaped the group.)

"Then there was the Coffee Party to undermine the tea party." (This time a laugh went up.)  "And then," the person speaking began sobbing as he continued, "Occupy Wall Street was supposed to take attention away from us and put the blame on the rich." I guess pooping on cop cars and raping college kids was not a big selling point with voters.

When they got to Wisconsin, the whole table was disconsolate. "'Double Down!' that moron Rich Trumka said, 'Double Down.'"

"Yeah, we doubled down all right. We worked together with Mr. Double Down Trumka on getting out street protestors.  We worked on occupying the state capitol, harassing the Governor and legislature.  We ran off and hid in Illinois to block the Walker initiatives.  We went all in for the judicial elections ,backing an utter twit, and then challenged them and demanded a recount which we were sure to lose and we  lost again.   And then, the most beautiful thing of all," the operative said, choking on the words, "we worked our butts off to get a recall election. Went house to house, Canvassed.  Got thousands of names on petitions -- many of them phony  but still names on a petition.  We called to get out the votes, and Walker wins again.  The Wisconsin GOP controls the state house, the supreme court, the house, and while it might possibly have lost the majority seat in the senate, that body's not meeting again until next year when they surely will regain control of both houses again. Double down. Now Double Down is out of money for the 2012 election there and the White House who told us to work with him expects us to get more money from a state where they think we are profligate campaign spenders and idiot sore losers. Good luck with that. Even my first grade neighbor pointed at me and laughed when I took down the Barrett signs on the front lawn. Kid even handed me a  Walker button."

"Well, they're finally getting voter ID so look at the bright side, in November's election you won't have to run all those buses from Chicago into Racine and Kenosha and Milwaukee." A really loud moan went up.

"Hey. I hope you guys don't think I'm crazy or anything, but it's hard for me to believe anyone in the White House could really be this stupid. I'm starting to think he wants to destroy the party."

"Seriously. I think he's a GOP Manchurian candidate.  All of a sudden we're losing independents, Jewish donors aren't returning my phone calls. Don't even mention Catholic voters. They're going to march against ObamaCare next. I mean why not insult them unnecessarily -- they are only one-fourth of the voters?"

"ObamaCare. How many days before the Supremes throw that piece of horse pucky out? A week? Two?"

"All of a sudden the other side is making sense in  arguments on religious liberty and states' rights and people are calling for free markets and less regulation..this after we spent years and -- how much? -- getting schools to dump civics classes and media to hire constitutional nitwits to make voters  ignorant of such things. He must be a GOP plant. There's no other explanation."

"How can we tell if that theory is right?" a skeptic at their table asked.

"I've got it," said a guy  who had remained silent so far. "Let's suggest he hire Bob Shrum.  If he takes that advice we have proof positive he's working for the enemy."